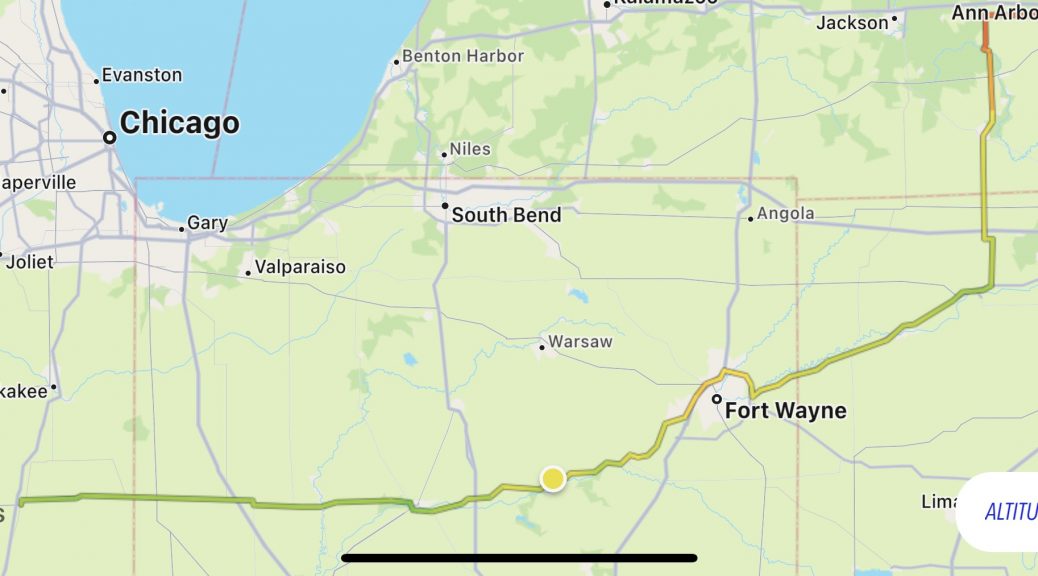 Today I leave for the second memorial party for our dear departed Redbeard Emeritus. I hope to leave work early so I can get some miles in before dark (famous last words).

If you follow Ghost Cruises, you may be confused because you clearly remember a Redbeard-themed ride out west from earlier in the year. That nice tribute ride on one of Redbeard’s favorite highways, US50, from the Midwest out to California. Surely, Ghost is a moron and copied/pasted part or all of a previous post title and didn’t edit it correctly.

For this trip, I’m going to do another pick-a-highway route and ride almost all the way from Ann Arbor to Columbia on US24. The significance to those who live in the greater Detroit metropolitan area is that US24 is Telegraph Road, a major boulevard/highway that crosses the metromess north/south. I won’t ride into Detroit to pick up US24. Instead, I’ll cut south on back roads out of Ann Arbor and start west on US24 west of Toledo, Ohio. Then I can stay on US24 all the way until I’m about 37 miles north of Columbia; from there it’s a short jog south on US63.

Being me, I hoard my vacation like it’s the last few strands of greying hair on my head. That means limiting this trip to two (or perhaps only one) day of vacation. The required day is Friday before the party, because I need to be arriving at the festivities (one of two hotels across the street from one another where almost everyone is staying) at a decent time so I can socialize with my friends on Friday. Given that the said festivities are ~650 miles (1,046 km) away, the only way to ride there in a single day and arrive for dinner time is to start 0-dark-30 in the morning… basically the butt-crack of dawn.

Those of you who know me are already laughing your ass off at this proposition. You know that I only see the butt crack of dawn if I’ve been up all night.

My traditional solution is to leave after work on the day before my first day off and get in a few hundred miles to make the Friday ride an easy one.

In a perfect world, I’d quietly shut off my work laptop around 3pm, hop on the Nightowl, and ride into the early evening to get 300+ miles (or so) behind me.

Obviously, this did not happen.

Not only did I fail to duck out early, but I worked until 5pm and then decided that there was too much to do over this break so I decided to pack my work laptop for this trip.

My work laptop fits in the left saddlebag, but my laptop backpack is too big to fit inside my saddlebag liner, which (naturally) contains other useful stuff for typical motorcycle tours.

I ended up getting out the saddlebag dividers that I haven’t used since I bought the bag liners, and re-installed them in the left saddlebag. Now the laptop backpack can fit in the outside half-shell and all the useful stuff from the left saddlebag liner and get transplanted to another smaller bag and ride in the inner half-shell.

I’d already chosen a good target for the evening and foolishly made a reservation there. The target was Gillman, Illinois, which is almost halfway to Columbia, Missouri… at least it is on the path I was planning to take.

The post-5pm departure meant that I was going to be riding into the evening again… fairly deep into the evening given that this isn’t June but the cusp of October, when the sun sets before 7pm.

Night riding means cooler temperatures, which means adding another layer. I had already planned to wear a long-sleeved t-shirt for today’s ride, but the evening temperature drop in autumn will (at least) require my purple flannel under my jacket.

Suited up, I start the Nightowl and back out of the garage, only to find that I have a mere 50 miles in the tank. I’ll need to stop for gas before I leave town.

As I’m rolling down the driveway, I remember that I had yet to ride on the new rear tire that I’d installed for this trip. One cool biker feature of living on a paved cul-de-sac, is that I can pull out of my driveway and do loops (in both directions) at increasing speed to attempt and scuff up the new tires a bit before I head out on the highway.

At the gas stop, I discover that none of my programmed Siri shortcuts are working on the phone. The most important one is Gas up the Nightowl, which switches from whatever app is in the foreground to the Road Trip app and opens a new fuel entry for the Nightowl, which several fields already populated with default values.

It turns out that the recent iOS update on my phone has a new requirement that previously-created shortcuts need to be approved if they access an application. I took a few minutes to extract my phone from its cubbyhole, enter the approvals for each of my custom shortcuts, and get on with the fueling operation.

Even with all the delays that led to the late start, I still had a gorgeous day for riding. It was just over 70° F, sunny, and very little wind.

I exited Ann Arbor on Scio Church Road westbound and took it until it ended at highway M52. There I turned south and took M52 through the small towns of Manchester, Clinton, Adrian, and Jasper until I finally hit the Ohio border. There the highway turns into OH109, which you can follow past the I80/90 toll road (Ohio Turnpike) and on to US24 just south of Liberty Center.

I’ve taken this route as a back way in/out of Ann Arbor for years. The fact that it was now after the start of rush hour didn’t affect my pace much; the Nightowl has plenty of power to pass traffic on two-lane highways.

I noted that one of my favorite Dairy Queen stores is still closed in downtown Manchester. My spy network says that the owner won’t bring it up to code so he can open it. Bummer.

Down in Adrian, the line at the Kentucky Fried Chicken drive-through was so long that two cars were stopped in the street at the end of the line. That was fun to drive around.

About the time you exit Adrian heading south, the rolling hills of the glacial moraine is gone and you find yourself on a flat plain, which won’t change much until you get into the Wabash River valley in Indiana.

Still, even with the flat topography, the small farms are still pretty, even in their late season, post-harvest, state. Several farms were doing their final cutting on their fields, cutting and shredding the corn stalks, weeds, or hay remains in preparation for fall. For the corn fields, most combines were transferring the waste product to tractor trailers for delivery who knows where. Watching the farmers do this work, it felt similar to mowing your lawn and bagging the clippings, except that:

Ok, so not so similar after all.

These cutting operations, along with the earlier sunset and the occasional V-formation of geese heading south, were reminders that we’re in the waning months of the 2021 riding season (at least in the Midwest US). Soon enough, the weather will get too cold even for heated gear and the roads will get covered in snow and salt residue. As far as any serious motorcycle trips go, this is probably it.

Traveling west as the sun was setting, there was a bunch of high-altitude cloud cover, overlapping swirls of diaphanous cirrus clouds. Back-lit by the setting sun, these clouds took on a myriad of orange, pink, and purple colors, with some portions of the clouds in the sweet spot (prisimatically-speaking) where they formed spectral sun dogs in the sky.

By the time I got to Fort Wayne, Indiana, the sun had set and evening was setting in. I took the US24 bypass around the north side of town and exited where US24 continues west towards the Wabash River valley. I needed a restroom break, I was getting hungry, and I was far enough along that a full tank would get me to my destination for the night.

So, time for a stop.

I didn’t really have time for a sit down dinner, and I abhor getting fast food on the road (Subway or other sub shops are okay, but your typical McDonalds, Wendys, Burger King, are unacceptable for motorcycle touring in my book.), so I subsisted on road food from the convenience store. This store had a pizza place inside and I was hoping for a by-the-slice arrangement, but those bastards were already closed. Not wanting to waste further time, I grabbed, a small can of Pringles potato chips, a two-pack of cherry PopTarts, and a Diet Coke.

I’d been getting chilly before the stop and I fully expected the deepening evening to get cooler, so I swapped the flannel and the perforated gloves for the heated gear. Yes, it’s still warm enough that I can add layers and survive, but I didn’t really want to pack myself in my leather jacket like an overstuffed sausage. Falling back on the heated gear keeps me comfortable without looking like a tick that’s about to pop.

Fueled up and back on the road, I headed west through the northern Indiana night.

From Fort Wayne to Logansport, US24 is mostly four-lane divided, but with intersections with local streets. It’s easy to make good time on this road. I’ve ridden it in the daytime and would usually alternate between watching the Wabash River or the traffic on the rail line that parallels the highway. Being nighttime, I simply kept an eye out for wildlife and other traffic.

At Logansport, US24 goes down to a traditional two-lane and leaves the Wabash River. It does, however, continue to parallel a railroad track, though this one doesn’t get much traffic.

Getting later into the evening, the traffic dwindled to almost nothing. Some of the small towns I rode through were so sleepy that I half expected to find the actual roads nicely rolled up for storage until the following morning.

I picked up an hour as I entered the Central Time Zone just east of the Indiana/Illinois border. The evening had cooled off significantly, so I was glad that I’d swapped gear back in Fort Wayne.

I pulled into my hotel parking lot a little after 10pm Central Time. Not a bad pace for mostly back roads.

I’m a moron. I forgot my iPad.

I usually compose trip reports on my iPad with the nifty-neato keyboard that includes the trackpad. I left it at home.

The good news is that I don’t have to compose all of this with my thumbs on my iPhone. I do have my work laptop with me this trip, so I’m live-composing these posts directly to the blog.

Here’s today’s map with my normal altitude overlay. The altitude isn’t very interesting, but there it is.

Continue on US24 west across the rest of Illinois, across the Mississippi River, and on to Moberly, Missouri, where I’ll turn south to get to Columbia.