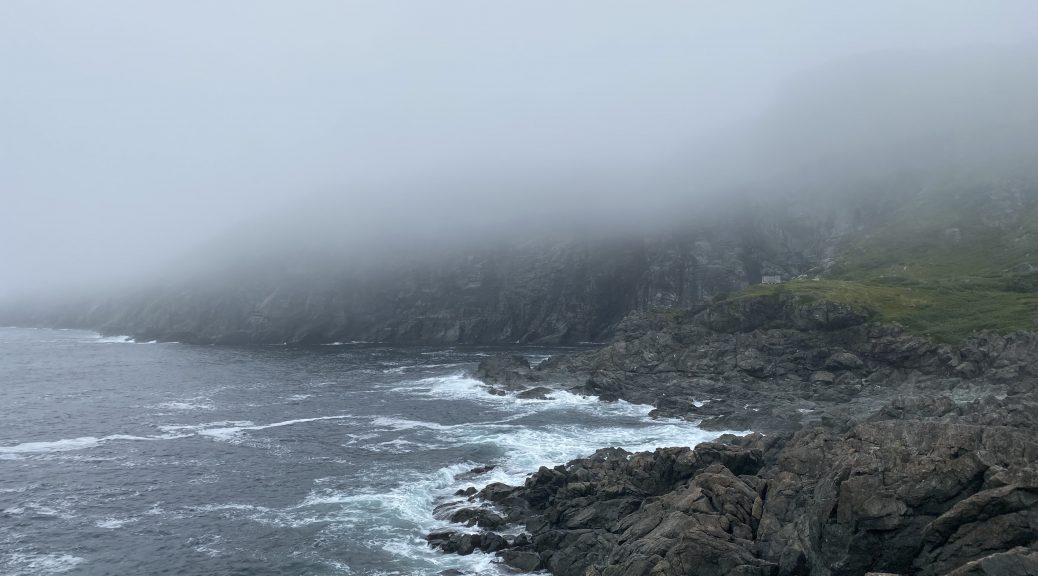 We ride the Viking Trail up the west coast of Newfoundland almost all the way to the top of the island.

We woke up to a light misty rain outside. It felt fine to walk outside in it, but if you stood out there for an hour, you’d be wet. This was the tail end of the overnight rain that started just we were retiring the previous evening. The forecast for today was that the rain would stop for now but could continue up the coast later in the day; guess where we were headed.

Chuck’s raingear is a set of waterproof liners that go inside of his textile riding gear. Consequently, they’re not as easy to throw on over your other gear when rain threatens. He elected to install his rain liners at the start of the day. I, on the other hand, figured that the current rain was light enough that the moving bike would shelter me from most of the dampness; I’d start the ride sans-raingear.

The goal for the day was to ride up the coast and spend the night within striking distance of the L’Anse aux Meadows historical site. Unfortunately, that site is fairly remote, literally at the northern tip of Newfoundland. Being remote, there isn’t much built up (hotels, restaurants, etc.) around it. The nearest town is St. Anthony, on the east coast of the northern peninsula. With this goal in mind, we already had reservations at a hotel in St. Anthony.

We’d already gassed up the bikes the previous evening, so we basically packed and got on the road. It was just short of 10am.

Geologically speaking, the western coast of Newfoundland is defined by the Long Range mountains. These are the mountains that are the main feature in the nearby Gros Morne National Park. The mountains run nearly the entire length of the western coast, but they spaced away from the shoreline, sometimes by several miles. As a result, the mountains impact on the weather, thrusting the wet air to higher elevations, cooling it, thus causing rain, tended to happen a bit inland and away from the coast. As a result, if you’re on a motorcycle riding the west coast of Newfoundland, you can find yourself in near clear riding weather while the mountains a mile or two to the east are covered in clouds and rain. This is exactly the conditions we encountered within fifteen minutes of the start of today’s ride.

We passed a conspicuous break in the Long Range mountains, which was pretty striking from the road, so I stopped for a photo or two.

We continued up the coast, making good time because highway 430, The Viking Trail, was in good condition and lightly traveled. (Much less traffic than on the TC1 – Trans Canada 1 – the previous day.) We encountered a few isolated darker clouds that dropped light rain on us, but these showers were very isolated; you could be in and out of a shower in 30 seconds; it was that spotty.

Further up the coast, I’d planned a little 16-mile side trip out to Point Richie, which was at the end of a peninsula that protruded west off the main coastline. We were in dry conditions on highway 430, but by the time we’d ventured halfway to Point Richie, we were in another rain shower. This shower only lasted until we reached Port Choix, at which point it stopped and were were back to light overcast. It seemed strange that the weather systems were so varied and highly localized.

Point Richie is fairly isolated and, on a day like this one, bleak. Still, it provides unobstructed coastal views because there’s nearly no trees here; it’s more of that tundra-like growth. We strolled around a bit and took photos.

On the way back into Port Choix, we were delayed by three caribou (yes, not moose, but caribou) standing in the road. The larger male got off the road and stood off the shoulder looking impressive. The two females just stood on the road and looked bored.

Chuck decided to ease through the caribou-jam. The two females on the road darted a step or two back and forth as if they were picking an escape route, but we were already past and, when I check my rear view mirror, they were still happily standing in the middle of the road.

We stopped in Port Saunders for a short break. On the way back to the highway, we re-entered the isolated shower that caught us on the way out to Point Richie. Much like before, it was isolated and we were back out into light overcast and dry roads in a minute or two.

Further up the coast, the instances of brief showers started to happen more frequently, apparently coinciding with the presence of the Long Range mountains being closer to the coast. Knowing that we would, eventually, have to cross the Long Range mountains to get to our destination of St. Anthony, I decided to stop in Flowers Cove and don my rain gear. Checking my gear during the stop, I took note that the only wet pieces of gear were my gloves and the toes of my boots, and those were only slightly damp. Still, I figured that there would be sustained rain while crossing this peninsula, so rain gear was logically in order.

And, yes, I was totally wrong.

The threatening cloud cover over Flowers Cove was gone and behind us within the first 10 minutes of riding in my rain gear. As it turns out, the Long Range mountains flatten out at the north end of Newfoundland, so our crossing of the peninsula only resulted in a peak elevation of 364 feet.

When we parked the bikes in front of the hotel in St. Anthony, Chuck called out to me, “I’m so glad you put on that rain gear.” After all, as bikers, we all know, going to the effort of putting on rain gear almost always ensures that you won’t really need it.

After check-in and unloading, we rode through town and out to the Fox Point (locally called Fisherman’s Point) to see the park and lighthouse. Along the coast, the weather was closed in a bit more than downtown, so the misty overcast clouds were hovering just a few hundred feet over the ocean, obscuring some of the higher cliffs along the shoreline.

The parking lot for the park was right up against the end of the point, so several cars contained locals who just sit and watch the ocean for a while… because they can. Due to the low cloud, the foghorn at the lighthouse was engaged, blaring it’s low warning tone about once per minute. With the fog and the nearby cliffs, the foghorn’s note lingered in the air a good five seconds after the horn shut off. Overall, this all gave the point a moody vibe. I imagine it would feel totally different on a bright sunny day. We walked around and took photos.

We rode back down from the point and stopped at another hiking/overlook area closer to the cliffs south of the point. I walked around and took some additional photos.

Further down from the point, I stopped briefly to get a photo of the harbor of St. Anthony, well protected by Fox Point.

On the way back into town, we visited a park that had yet another PBY Catalina on display (the other one we saw was when we visited Botwood). These Newfoundlanders sure love their amphibious plains. This one was used to fly express cargo to coastal communities that could only be reached by boat/ferry.

On the way back to the hotel, we stopped at a gas station/convenience store to get drinks/munchies for the evening. With those supplies dropped off at the room, we ventured back out to find dinner. The Haven Inn that we were staying in had a on-site restaurant, but we felt like seeing more of St. Anthony.

We started by cruising the local strip mall for options. The mall had a pizza place, a Mary Brown’s, which we had earlier, and a place called Wanda’s Menus, which we couldn’t see from the parking lot. None of these were deemed inspirational, so we headed back through town towards a brewpub that we’d seen earlier called Rag’n’rok (yes, like the Thor movie).

When we walked in to Rag’n’rok, we discovered that their menu was limited to pub munchies. While some of them (can you say Brie Bites?) sounded quite tasty, we were in the mood for a proper dinner. So… it was back on the bikes and heading back to the hotel to eat at the on-site restaurant.

As it turned out, the on-site restaurant was pretty good. Chuck had pork chops and I had steak and shrimp; both were tasty and devoured with enthusiasm. We both caved in and got the Partridge Berry Carrot Cake for dessert. You’re asking, “What the hell is a partridge berry?” That’s OK, we didn’t know either. A partridge berry is similar to a blueberry, but much more tart than sweet. Poured over the carrot cake as a fruit sauce, the partridge berries added tartness that nicely cut down the sweetness of the carrot cake. (I’m sorry, no photo.)

Here’s the totally fubar map that Trails recorded for the day. For whatever reason, about 15 minutes into the day’s ride, Trails shut down and stopped tracking. Usually, this only happens when the iPhone turns off the GPS because it’s overheating, part of its self-preservation program. Why it shut this one GPS app off is anybody’s guess.

You can see the results of the failed track: basically get to see where we started and ended, and not much else.

Luckily, I was using the Scenic app to navigate today’s route. Consequently, I do have a recorded ride from Scenic, which provides an interactive map that you can use.

In the morning, we’ll visit the L’Anse aux Meadows UNESCO historical site, an active archeological dig at a Viking village dated to 500 years before Columbus. After we spend lots of time geeking out on Viking artifacts, we’ll ride down the Grenfell trail and back to the west coast road.