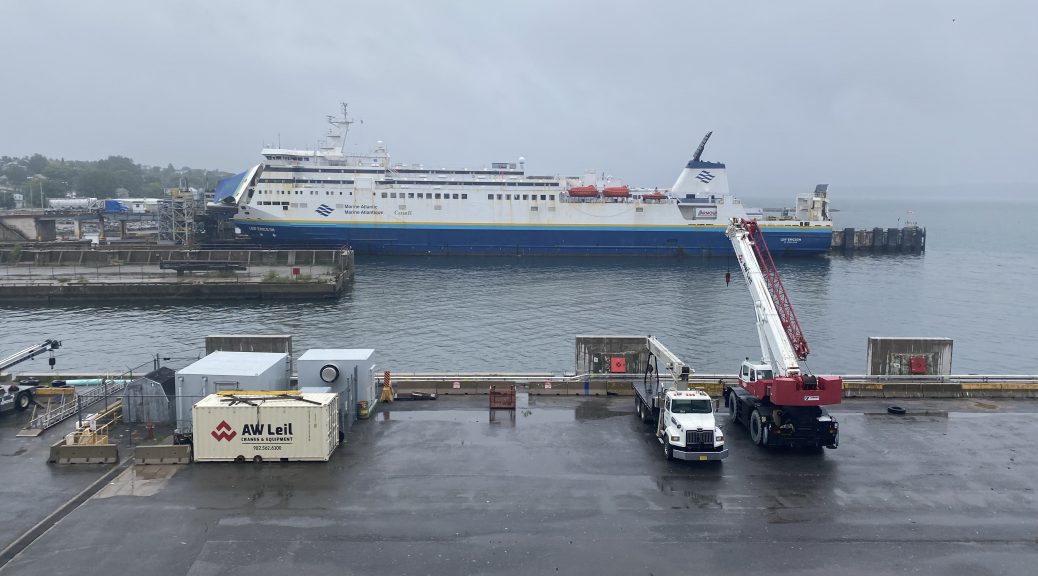 Yes, it’s going to be blustery and rainy, but we have ferry tickets to Newfoundland, so we’re committed today.

Today’s ride was mandatory. The tickets for the ferry that was due to leave later today, ~5:30pm Atlantic time, were non-transferable (at least, not without a penalty). The bigger problem, should we not make it, was that it would be very unlikely that we’d have a berth to lay down in. Consequently, we were motivated to get our butts to the ferry on time.

Instead of winding our way over to Nova Scotia highway 102 using the back roads, we elected to are a more direct route to the main highway. This was primarily due to the nasty weather forecast; the four-lanes would make for better visibility.

We rode southwest to highway 101 and took that south to highway 102, which we doubled back on to head northeast. After a little additional congestion and road spray around Halifax, the rain let up and we made some good time northeast towards Truro.

As we reached Truro, the cross-winds, blowing east to west, kicked up and was pushing us around as a crosswind. Then we turned on highway 104 east and that gusty crosswind because a headwind. Ugh. Less disruptive, no doubt, but now our ~70 mph highway speed felt like ~100 mph.

We stopped for a break around New Glasgow, mainly to stretch legs and to eat a donut or two; thank the gods for Timmies (Tim Hortons for you US folk). With a few donuts and some beverage in our system, we continued on.

The winds really kicked up as we approached the Canso Causeway, which connects the island portion of Nova Scotia with the mainland portion. The wind was whipping through this isthmus and it took a little added attention to stay in our lane during the crossing.

We stopped for gas in Whycocomagh, Nova Scotia and endured a long line for the only bathroom in service. This extra time effectively burned through any spare time we would have had in North Sydney before entering the ferry staging lot. A bit of a bummer, but not fatal.

Just east of Whycocomagh, the heavens opened another notch and the on-and-off mist we’d been riding through became a steady light rain. It cut our visibility and (consequently) pace a bit, but we were still moving along well enough to get to the ferry on time.

We pulled into the ferry terminal parking lot at 3:24pm, 21 whole minutes before our deadline. Plenty of time.

Check-in went smoothly. We were both given boarding passes and I was given the room key (printed on card stock, like the boarding pass; interesting). We parked in our staging lane with a few other bikes and a half-dozen quads (off-road four wheelers). Since it was still raining, we walked to the nearby terminal to wait for the loading call.

We chatted with a few of the other bikers and quad riders. Some were on tour like us. The quad riders were a group that was crossing Newfoundland on a rail-to-trail route.

The call to start loading came and we ventured back out into the (now much lighter) rain. Our entire lane of light vehicles rode under the raised bow of the ship and were routed to the starboard side of deck 3, which is the lower deck for private vehicles (commercial vehicles go on lower decks).

The ferry provides tie-down straps; some are ratcheting, but most are simple locking straps. They don’t provide soft straps, so we’d brought our own sets of those. With two straps at both sides of the engine guard and the other two at each saddlebag guard, we were able to tie down the bikes at the four corners. (My apologies, I meant to get a photo of the bikes tied down, but I forgot.)

We took the elevator from our parking deck 3 to our cabin deck 8. Our cabin was towards the bow (front) of the ferry, which could mean more up/down movement out on the open ocean. To help combat sea sickness for the voyage, Chuck had packed meclizine and had graciously offered a few doses for my consumption. The card-stock-printed door key, with a magnetic strip on the back side, did indeed open the cabin door, revealing our expansive four-person berth.

The berth wastes no space. There’s only a narrow aisle between the pairs of bunks and the coat closets are longitudinal (hanger rod hangs front to back, not side to side). In contrast to the room, the integral bathroom for the room had plenty of interior space to move around and get your business done (and it had a shower, which we didn’t test out). This berth was nearly in the middle of the ship (side to side), so it had no view of the outside.

Chuck and I were wondering how four guys with motorcycle gear could possibly fit in this room. It would be a challenge, and they’d have to be pretty friendly. As we were leaving the room to explore the ship, we encountered a family of four entering the room next to ours. The dad was bigger than Chuck or I and the kids were teenage; they’ have fun negotiating that narrow aisle with four bodies to content with.

We roamed the ship and noted that the dining buffet would open in about 20 minutes. I walked around some of the available decking and took a few photos before we left.

While I was taking those photos, Chuck was drafted by the restaurant staff to be the first one in line for the soon-to-open buffet and relay instructions for how to form the inevitable line down the hallway. Consequently, when I showed up, I had a place waiting for me first in line.

While we were waiting in line, we couldn’t see outside, so it wasn’t until we sat down for dinner that we noticed that we’d left the dock and were sailing out of the harbor.

The buffet was surprisingly good. A lot of options for food, which was nice. We both available ourselves of the available pie selection on the dessert kiosk.

After dinner, we went up a deck to check out the main bar and lounge area. There were a few people who’d staked out their claim to enough sofa space that they could lie down later (too cheap to spring for a berth, or too late for one to be available).

With a full day behind us and a full dinner in our bellies, we decided to nap for a while and venture back out later if we wanted a drink or to look around some more.

With the lights off and no window outside, the room got dark. The ship was out in the open Atlantic now, and was getting thrown around a bit. You could really feel it as you lay in bed. Every now and again, we’d come down off a wave crest and plow into the next wave a little harder, sending a low “boom” through the ship’s hull.

In spite of the motion and occasional wave noise, we were both asleep fairly quickly. Foreshadowing: we didn’t get up again that night.

Here’s our map for the day, complete with the normal altitude overlay.

Leave the ferry and travel across southeastern Newfoundland from Argentia to our hotel room for the next two days, in St. Johns.

One thought on “Newfoundland Day 6 – Get to the Ferry”