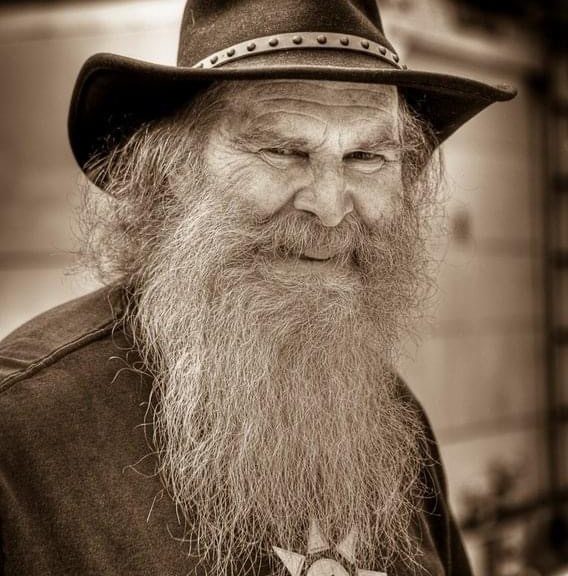 This weekend I’m attending the first off two parties to celebrate the life of Redbeard Emeritus, so I’m compelled to tell a few stories from my friendship with him.

The Brewpub Crew from MITM IV

Back in 1997, I was a very minor online presence in the rec.motorcycles.harley newsgroup (RMH) and the Harley Email Digest (HED). I saw a post on RMH talking about an annual event down in southern Illinois called Meet in the Middle (or MITM for short). It was touted as an opportunity to get out from behind our respective computer screens and meet each other in real life (IRL). This was supposed to be the fourth time they held it, so I expected it would have decent attendance. It sounded like fun, and my social calendar wasn’t exactly full at that point, so I signed up not knowing who’d I’d meet or if anybody would even know me.

I arrived on Friday afternoon of MITM weekend, went through a quick registration, and set up camp. This would be the last year that MITM was held near Staunton, Illinois. That evening I had a couple of good around-the-campfire conversations with a few folks (Dana and Celiz leap to mind).

On Saturday, Ed Eckert led us a day ride that was described as the “Cornfield Tour”. The route followed eastern bank of the Mississippi River, crossed over to Missouri on a ferry, and returned to Illinois across a bridge. About that time, we had a gas stop for those riding Sportsters with peanut tanks. Ed used the break to announce that the rest of the ride was basically back to the campground, and the group could follow him or split up as desired.

One woman spoke up, saying she’d heard of a good brew pub in downtown St. Louis (about an hour away) and was going to check it out. Would anybody want to join in? Immediately, a tall, gangly, bearded gentleman voiced, with great enthusiasm, his desire to join, and a couple of other guys wandered over to ask more about this expedition. I had enjoyed the ride so far and wasn’t quite ready to head back to camp, so I asked if I could tag along. The lead woman looked at me as if to say, “Why are you asking permission?”, and encouraged me to follow along.

The five of us rode mostly back roads until we finally got on the highway to cross the Mississippi River into St. Louis, Missouri. The lead woman apparently knew where she was going and led us to the target brew pub. We went inside, took over a table, ordered beers, and proceeded to discuss a bit of everything for the next couple of hours.

The four people I’d joined for this side trip were:

I had no way of knowing this at the time, but this was a watershed moment in my life. It helped establish the online biker community as a source for some of the best and most enduring friendships that I’ve had since college. It led to filling my riding calendar with events all over the country. It led to me being a guest in countless homes, again, all over the country, and also led to me hosting some online biker friends in my own home.

I only saw Eric a few times after this day, but I still see him pop up online from time to time (including just a few days before this post).

Chuck, Redbeard, and Red, all became some of the best friends I have. We’ve seen each other at events (and sometimes we’ve helped organize events) all across the country and have rolled some serious miles together on rides.

Redbeard and I eventually engaged in a friendly competition of who could ride to the most events. Naturally, I lost in dramatic fashion. Redbeard was at everything, and was always happy to see that I’d made it too. He was the dictionary definition of larger than life and every party he attended got a little more interesting when he arrived.

I wonder, sometimes, how different my online biker life would have been, and even how much more motorcycling I would have done, if I hadn’t joined Red and this group for that extra little ride that day.

All the joy I may have missed out of.

One summer, Redbeard was traveling with his wife Connie and called me out of the blue to see if I would be around that evening. They were riding through southern Michigan and could be in Ann Arbor late in the afternoon. I invited them over and told them that the guest bedroom was theirs if they wanted it.

Once Redbeard and Connie arrived, I dug out some liquid libations and we sat on the couch and caught up. I related the story that their timing was fortunate, since I’d just returned from a three-day weekend where I took my mother on a tour of the lower peninsula of Michigan on the Cruiser.

Redbeard was amazed. He thought it was so cool that my mother would climb on the back of the Cruiser and survive 300-mile days for a few days in a row. He kept asking for further details of this amazing feat when Connie touched his arm and quieted him down.

“Ghost”, she asked sweetly, “How old is your mother?”

I answered and it turns out that my mother is younger than either Redbeard or Connie.

Boisterous laughter ensued, with Redbeard breathlessly describing between guffaws how he had envisioned a sweet 80-year-old, gray-haired woman donning one of my old motorcycle jackets and a helmet to join me for a ride.

Back in 2000, Sam and I were touring together and had just finished the Run to the Sun group ride at Skippy Speedracer’s father’s place outside of Rapid City, South Dakota. This is where our online biker friends gathered for the Stugis Motorcycle Rally for a couple of years after Penny and Skiv moved away from their place just to the north of Skippy’s. A lot of the regulars were there, including Redbeard (naturally).

Sam and I left the group on Friday of Sturgis Bike Week to ride some roads to the west and south before looping back east. After three days of riding, we were traveling from Durango, Colorado to Gunnison, Colorado. That afternoon, we were traveling eastbound on US50 towards Gunnison.

Meanwhile, unbeknownst to either of us, Redbeard had traveled on a loop of his own and he was now heading west on US50 across Colorado.

Just west of the Blue Mesa Reservoir, I noticed an oncoming bike with the telltale headlight and passing lamp configuration that screams Harley-Davidson. As we approached each other at 150 MPH combined closing speed (each of us traveling in opposite directions at 75 MPH), I was able to make out more details about the oncoming bike:

My late realization, combined with our rapid closing speed, left me with little time to react. All I could do was raise my left arm and point at Redbeard, turning my head to look at him as we flew by each other. He only had time to raise his left hand in a stationary wave with a huge smile on his face.

Just like that, the moment was over and we blew by each other. Other friends, perhaps ones that hadn’t spent several days together just four days prior, might have pulled over or u-turned to meet up and at least hold a brief conversation.

We just kept riding, comfortable in the notion that recognition had been achieved. We’d see each other again at the next online biker event.

One thought on “Memories of Redbeard Emeritus”