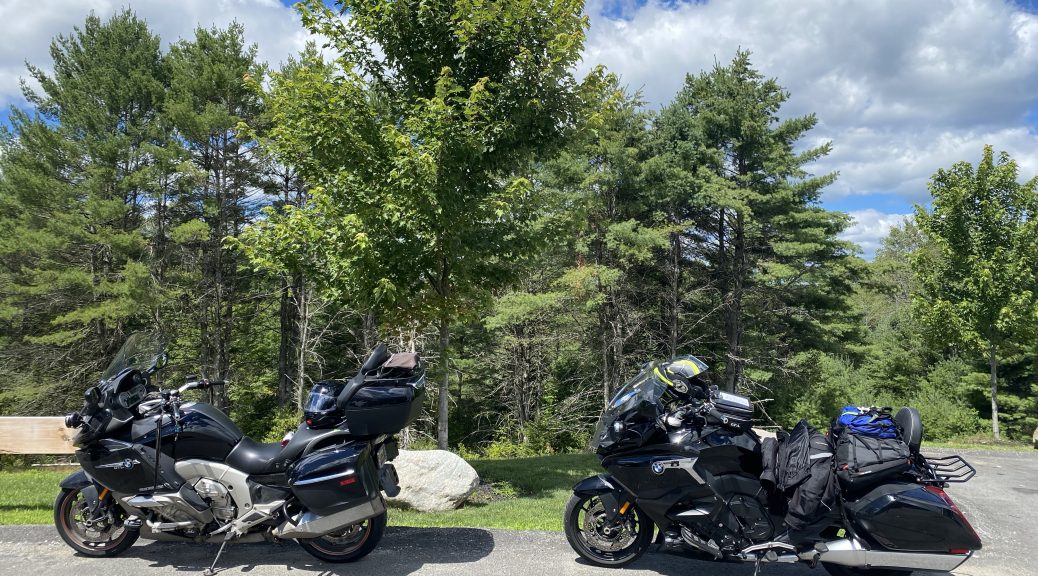 Today we leave the interstate highways and venture across up-state New York, Vermont, New Hampshire, and into Maine.

Our ultimate goal is to get to our friends in Nova Scotia from Michigan in three days, which equates to ~450 miles/day. Yesterday, we did a little about 440 miles. Today, we will try to do the same, though it will be harder (and easier?). Harder because we will be on mostly two-lane roads winding through the Adirondacks and the Appalachians. Easier because we don’t have to wait in line for two border crossings.

The alarm went off at 7:30am and we started moving around soon thereafter. I indulged in a little breakfast. We packed, hunted down a missing luggage strap, wiped some of yesterday’s accumulated bug guts off the bikes (ask any hotel front desk for rags and they will usually give them to you).

We made a required stop at a drug store for some allergy medication, another stop for gas, and got our butts down the road shortly after 9am.

We started in bright sunshine, nary a cloud in the bright blue sky, and pleasantly cool temperatures. Cool enough, in fact, that we both donned an additional layer for (at least) the morning ride. (Foreshadowing, the extra layers never came off.)

After a short ~20 miles on the interstate, we exited north towards the Adirondack mountains. Here the roads were under construction and full of detours and congestion. We lost some time here, but it was such a nice day that it was mostly tolerable.

Once we got heading north on New York highway 8, the traffic thinned out significantly and the scenery transitioned from farmer’s fields to never ending rows of low forested mountains. Nearly all of NY8 curves along one of several riverbeds, a few reservoirs, and even a railroad track. The brawny six-cylinder engines in our bikes made fairly easy work of the passes that needed to be made in the name of progress (after all, we have friends to hang out with in a few days).

Our first stop of the day was at the only gas station/convenience store/wilderness outfitter along about a 60 mile stretch of NY8. You can tell when you’re in the trendy wilderness, when the outfitter’s parking lot includes half a dozen Tesla charging stations. I guess we must be in New York.

After the Adirondacks, we passed by Lake George, which drains south into the Hudson River and down to New York City. Soon thereafter, we crossed the bridge across the lower edge of Lake Champlain, which drains north into the St. Lawrence Seaway near Montreal, Quebec. A long time ago, these two lakes, separated by a few miles of dry land, were a major trade route as materials moved up and down these two water systems. There’s a reason Fort Ticonderoga was built in this area. For you history buffs out there (especially for fans of Daniel Day Lewis), the events depicted in The Last Mohican by James Fenimore Cooper, take place in this highly contested region. In short, we were riding through an area with boatloads of history; something to think about as the miles roll by.

We took another brief break from our in-the-saddle time just west of Appalachian Gap. This route was a favorite back in the day of the old Vermont (sic) runs. I’d travelled it several times in the past, but never west to east; today would be the first time.

The day was clouding up a bit as the air mass over us got cooled by its journey over the Vermont mountains ranges. We endured a few cars in front of us for the first part of the climb, but the last one blessedly exited the road before the twisties started; then the fun commenced (see videos at the end of this post).

We stopped briefly at the gap for a photo or two. I noticed that the surrounding vegetation has grown a bit since my last visit. The commanding view to the west is now mostly obscured by new growth.

Our trip down the east side of the gap was molested by a SUV towing a pop-up camper. Serious bummer.

Down from the gap, we turned north on VT100 and rode through Montpelier, the state capitol. We could see the Gold dome of the capitol building across the river, but we didn’t stop for a photo.

From here, the day got cloudier, and the progress got much more difficult. The highways in northern Vermont follow cart trails and most haven’t been upgraded with broader curves and nice wide shoulders. Consequently, the typical speed limit for a US highway (in this case, US2) across northern Vermont is 50 mph. Sammy Hagar once wrote a beautiful song that captured the frustrations of traveling at our old national speed limit of 55 mph. Imagine his added hatred for a pace that was even slower. Seriously… imagine!

We may have bent that speed limit once or twice along this route, that is, when the other drivers weren’t impeding our way.

Lucky for us, none of the New England states are very big, so you can cross them fairly quickly. We would have been in New Hampshire for only about 25 minutes we’re it not for a stretch-our-legs stop at a little convenience store somewhere in the northern wilderness of New Hampshire.

Shortly after our entrance into the great state of Maine, we turned off US2 and on to a number of Maine state highways, each one winding its way closer to, but not directly towards, our destination of Augusta. The increasing clouds cover, and the lack of wide ditch areas at the sides of the highway brought the increasingly dark forests closer to the roadway and heightened our paranoia over an all-to-close-encounter with Bambi or his brethren. In hindsight, our concerns were unfounded; we didn’t see an animal at the side of the road all day.

When we started the day, the navigation app predicted our arrival as 7:35pm. Every time we stopped, that time (naturally) got later. Every time we rode, that time got earlier (because we enjoy our rides). We pulled into the parking lot of our hotel at 7:25pm. Go us!

After moving into our room for the night (once again, reserved for us by our fair and winsome support team – i.e., Barb), we contemplated dinner options.

Chuck and I have a running joke about how nearly all of our international trips include one night where we somehow end up eating at a Chinese restaurant. While driving in to hotel parking lot, I’d noticed a Great Wall Buffet restaurant right across the street. Given that it was in walking distance, we had a winner. Not exactly a traditional Maine lobster sandwich, but it will do.

We have two videos for today.

First, we have a highlight video for the day:

Second, we have a view of Chuck following me up Appalachian Gap in Vermont:

Today’s maps are plural because I’m using two different tools to do the work. I don’t really want to use Waze for routing on Newfoundland because:

For all these reasons, I chose to pack an extra GPS navigation app for this trip: Scenic. It can work with offline maps and has a few extra features specifically tailored for motorcyclists. As a bonus, it can import individual layers from a “My Maps” Google Map, which is exactly what I was using to share the route planning for this trip. Cool, eh?

First, here is my traditional track of the day, from my trusty Trails app, with an overlay of altitude for the day.

Next, here’s a link the saved ride from Scenic. You’ll have to browse to this, but then you can zoom in on the map.

In a perfect world, we’d somehow:

In short, we have a challenging day for tomorrow.