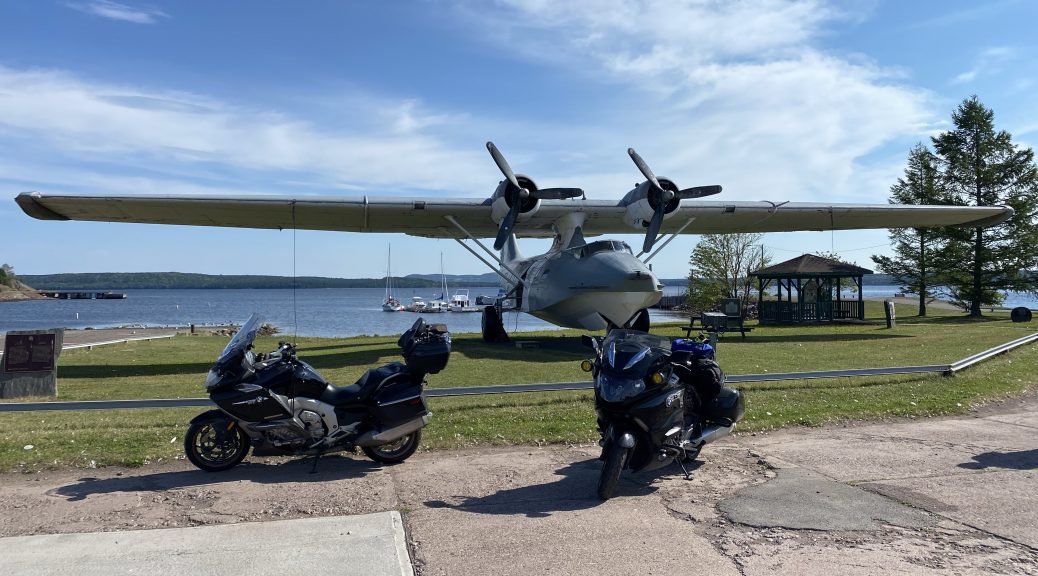 Today was basically a travel day, with a museum stop in Botwood at an old flying boat base used in the 1930-1950 era.

There was rain due at our destination of Rocky Harbour starting around 6:30pm. Consequently, there was no sleeping in until 10am. (Besides, 10am was our assigned checkout time.)

It was another gorgeous day, with only the slightest wisps of high altitude clouds on an otherwise azure sky. It was still early enough that the temperature was only 61ºF on its way up into the mid 70s..

We got up around 8:30am and went through the normal motions of getting cleaned up and packed. One variation was that we took some time to sit out on the dock in the back yard to sip some water and watch a couple of tugs try to dock tanker ship that had entered the inlet. This Air B&B cabin had really worked out well; if you’re ever in Newfoundland, Come From Away cottages in Lewisporte gets the Ghost seal of approval.

It didn’t take long to cover the ~10 miles down to the TC1 (Trans Canada 1), where we turned west. The weather, as mentioned, was wonderful and the traffic wasn’t too heavy, so we made good time to the Botwood exit.

The reason we were visiting the tiny village of Botwood is because Botwood has historical significance in first 50 years (or so) of aviation. Back then, planes couldn’t fly all the way from New York to London non-stop because:

To conquer these challenges, you made intermediate stops, and Newfoundland is as far to the east as you can get on the North American continent before you make the final long jump to the British isles.

These long flights meant carrying lots of fuel, which meant you needed a pretty big airplane to begin with. Unfortunately, big airplanes need very big runways to land on and take off from, and very big runways are expensive and labor intensive to build. The solution to this problem is the sea-plane (or flying boat): a large airplane designed to take off and land exclusively on water.

Back in the early 1930s, Pan American Airlines hired Charles Lindbergh (yes, that Charles Lindbergh, who flew the first solo crossing of the Atlantic Ocean in 1927) to fly around the eastern coast of North America to find viable locations for sea-plane bases. His recommendation for an eastern-most sea plane base was the coastal logging village of Botwood, Newfoundland. The long sheltered inlet would mean less wave action for smoother take offs and landings.

When World War II started, the allies needed a base for air patrols for U-boats in the North Atlantic. The Pan American facility at Botwood, was greatly expanded to better support a fleet of amphibious aircraft that could land and take off from either the land or water. They added a sea ramp, two large hangers, a large tarmac, and several crew barracks. The most common plane to frequent the Botwood base was the venerable PBY-Catalina, a big, slow, amphibious plane whose biggest advantages were reliability and flight range; perfect for long-duration reconnaissance flights.

By the end of World War II, the war effort had built a large runway at Gander, Newfoundland, about 50 miles east of Botwood. With a place for large planes to land on Newfoundland, Botwood’s sea-plane base, and the Pan Am Clipper flights as a whole, became obsolete.

The good people of Botwood have kept the old Pan Am comms/lounge building standing and have turned it into a flying boat museum, complete with a PBY-Canso (Canada’s name for the Catalina) on site. Being a bit of a nerd on the subject of aviation history, I had to visit this museum.

After the museum visit, which was very cool by the way, Chuck and I rode back through Botwood and elected to stop at a Mary Brown’s for lunch. Mary Brown’s is like a cross between a Kentucky Fried Chicken and a Popeyes Chicken, but with a wholesome mom-like female for a logo and ownership and management exclusively by Canadians. We’d seen them all over Newfoundland and nowhere else (though we found out later there are franchises in Nova Scotia and Ontario), so we decided to try one as a part of the quintessential Newfoundland experience. (Our friends in Nova Scotia were even texting us hints as to pros and cons of specific menu items.) In short, the spicy Nashville taters (potato wedges) and the buffalo chicken sandwich were both tasty. The general pieces of chicken were okay but a little bland.

After lunch, it was back down to the TC1 and then a few hours more west towards Deer Lake. These hours went by without incident as we made good time helped along by little traffic, plenty of passing lanes, and good road conditions.

As we traveled west, we’d occasionally crest a hill and get a look at the scenery ahead of us. With each subsequent hill, the mountains towards the west coast got closer and more well defined. The general landscape got hillier with denser forests in a mix of deciduous and conifers.

At Deer Lake, we turned west on Highway 430 and made our way into the mountains for the last 40 miles of the day.

Now, these mountains are not the Rockies, but they seem rather exaggerated in their steepness, as if they have to get the most verticality in the space they’re allowed to take up. They’re still nearly fully forested, but there are plenty of regions of bare rock outcroppings. It was quite striking. I’d heard some folks compare portions of the Newfoundland coast to the fjords of Norway; I can now see why people make that comparison.

Chuck and I lucked out and managed to get out from behind surrounding traffic for some of the ride through the mountains. That was great fun, but it seemed like there was always somebody else we needed to pass to gain the freedom to attack the road in a spirited fashion. Of course, we’ll get another crack at that low mountain pass when we come back this way in three days.

With the short mountain stint behind us, we reached Rocky Harbour and traveled through town to get to our cottage for the night. Riding through town, it was obvious that this harbor town catered to the tourist trade more than the fishing industry. We passed a few places that I recognized from room shopping in the area; places that had astronomical room rates.

It was easy to find the Bayside Cottages, another Air B&B reservation that I made for this trip. There wasn’t any available parking in front of their office, but I knew we were in cottage #4, so we parked there. I walked down to the office and Ruby gave me my key and the WiFi password. She also suggested either Earl’s or Fisherman’s Inn for local eating establishments.

After unloading, we relaxed for a bit before planning the evening. We’d gas up and pick up some beverages for the evening, drop those supplies off at the room, and then walk over to Earl’s for dinner.

We rode over to the local gas station/convenience store only to discover that they only had 87 octane gas (the K1600s like 89 or higher). This was the first gas station that was remote enough that it was limited in this way. I’d previously run the Nightowl on 87 (even 85) octane without any problems, so I shrugged it off and filled up the tank. Chuck has a Brentune on his B, so he elected to add some octane booster for some extra security.

We unloaded the supplies back at the room and started the 4/10 mile walk over to Earl’s. Unfortunately, when we got there, we discovered that the dining room at Earl’s was closed this evening due to a lack of staff (too many people called in sick?). We fell back to another establishment, Jackie’s, which we passed on the way to Earl’s. Jackie’s was, technically, take-out only, but they had several picnic tables set up in their back yard if you wanted to eat on site. We ordered and dined.

After the short walk back to the room, it was time to write trip reports.

This wasn’t an overly video-kind day of travel, but I did find some footage of us winding through the Gros Morne mountains just before we arrived in Rocky Harbour.

Here’s the traditional old-school static map with an altitude overlay. Ignore the low altitude shown as -500; that’s my GPS waking up slowly, probably due to a hangover.

Here’s a link to an interactive map of the day’s ride, courtesy of Scenic.

I think our luck will run out and we’ll have our first day with consistent rain. We’re due to ride up the west coast to the northern reaches of Newfoundland for a overnight stay in St. Anthony. Tomorrow’s weather forecast changes from hour to hour, so we’ll see what happens.

One thought on “Newfoundland Day 12 – Botwood and Rocky Harbour”