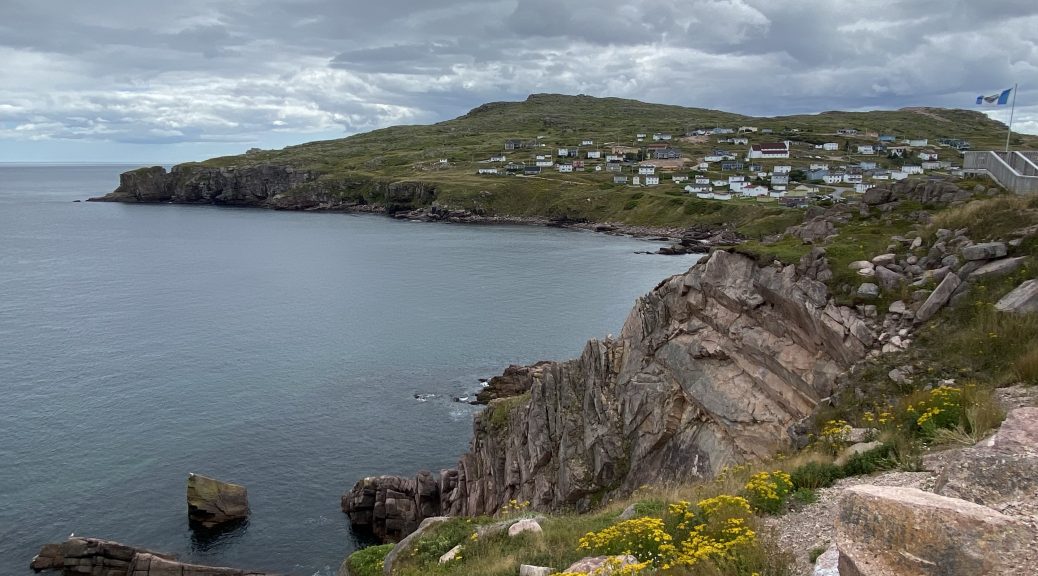 Leaving St. John’s, we explore the first northern-facing peninsula to the west.

We had 262 miles of mostly coastal highways to ride today, so we didn’t want to wait too long before getting moving. Since neither of us had stuffed ourselves at dinner the night before, we both elected to grab a little breakfast at the hotel before hitting the road.

Since we were leaving our two-night domicile in St. John’s, we had to fully load the bikes today; just a few additional pieces to stow. After securing gas from a non-sketchy Circle-K, we jumped on Trans Canada 1 and headed west.

It was another partly sunny morning in Newfoundland, with the temperature just over 70ºF. The ever-present wind was coming from the west-north-west, but wasn’t overpowering (yet).

Our target was the Baccalieu Trail, a path that explores the coastal towns of the peninsula between an eastern bay (Conception Bay) and a western bay (The Coish). It was one of the earliest settled areas of Newfoundland, mostly by Irish immigrants. To save you a Google search: Baccalieu means codfish.

Cruising along on the TC1 (Trans Canada 1), the extra flannel layer I’d added under my leather jacket felt justified. We noted that the traffic today (Saturday) was substantially less than on the previous day (a Friday). Consequently, we made good time westbound. At this point, we were traveling this stretch of highway for the third time:

We exited the TC1 towards Avondale and began what would be a repeated pattern of riding for much of the day. You see, the Newfoundland coast tends to be rocky, steep, and full of peninsulas and inlets. As an early explorer mapping Newfoundland, you could sail around for a good long while without finding a decent beach to send lifeboats ashore. As a result, modern roadways that follow (relatively) the coast tend to climb over a finger of land sticking out into the water, and then descend into a cove that hosts a small town. Then you leave that small town to climb over another finger of land… and down into another cove with another town.

If this sounds boring, it’s really not that bad. Each town has it’s own character. Some are more tourist-oriented, with cottages, pleasure boats, and some actual beach. Others are built for the fishing industry, with breakwaters, a harbor full of fishing boats, and (sometimes) a large seafood processing facility, right next to the harbor. For today’s ride, all of these cove-communities were enjoying a nice weekend (it’s Saturday) and were hanging around food trucks, playing in parks, lining up in front of ice cream stands, and so forth.

We stopped to stretch our legs along Clarke’s Beach. Chuck tried to negotiate terms for surrender for his GPS unit, which was being recalcitrant. I took a quick panorama.

Now that we were off the TC1 and on curvy town-to-town roads, I no longer needed to protect myself from the chill of high cruising speeds. I took off the flannel and just wore a long-sleeve t-shirt under my leather jacket.

Further on, we rode along the west coast of Harbor Grace, which included it’s own derelict ship in the middle of the harbor. Apparently, the SS Kyle, already an old ship when it entered Harbor Grace for the last time, grounded in the harbor in 1967. It became a bit of a tourist attraction, so the locals kept the ship around. By 2015, it was deemed too deteriorated and dangerous to be near, so now the locals want it taken away. Here are my two photos of Harbor Grace.

Heading out on the peninsula, I grabbed another panoramic photo of the waters of Caplin Cove.

Eventually, we reached the intersection near the end of the peninsula where highway 70 along the east shore meets highway 80 from along the west shore. If you’re traveling anywhere around the end of this peninsula, your trip has to include a pass through this intersection. There’s just no other way to get from here to there.

For our first visit to the 70/80 intersection, we hung a right and traveled up to Bay de Verde, which is positioned on a low piece of land joining the high cliff of the mainland and a tall rock about half a mile off the mainland. The combination formed a nice little harbor and the locals built their homes up the steep rock sides on either side of the harbor.

Chuck and I were looking at the boats in the harbor when Chuck spotted a local and asked him what the boats fished for. We were expecting cod, but the local (actually, former local, he lived his first 50 years here and has since moved to Ottawa; he’s back for a month-long visit) said that the boats were mostly crab and shrimp boats. They also fished for other useful fish, but not cod, which was declared off limits (due to overfishing) by the Canadian government back in the 1990s. Like virtually every other Newfoundland native that we’ve had a conversation with, he was very friendly and more than happy to share details of what life is like on the island. It’s not an easy life, by any means, but the folks the chose to stay here sure seem to like it.

Here’s a bunch of photos from Bay de Verde.

While I didn’t capture it in a photo, today marked the annual Quilting Festival for the region. Consequently, for much of the day, we noticed quilts hanging from clotheslines, hung over fences, draped over cars in driveways,… basically everywhere.

From Bay de Verde, we traveled back to the required 70/80 intersection, hung another right, and followed the road to Grates Cove. This is the northern-most point of the peninsula that hosts the Baccalieu Trail. It contains a wide cove and a small community. One would expect there to be a nice big lighthouse here, but for whatever reason, there’s only a small light that marks the harbor.

At this point, my Scenic GPS app instructed us to follow a goat path that would bypass the required 70/80 intersection and take us directly to the town of Old Perlican. Before I throw Scenic under the bus, I must explain that this route was originally created in Google Maps and imported into Scenic… so Google Maps is the one who actually fumbled this ball.

Chuck knew better than to follow me up that goat path; he waited for me to turn the Nightowl around on six-foot-wide goat path on the tennis-ball sized gravel. Happy, happy. Joy, joy. After I extracted myself from my GPS-induced trap, we headed back to (say it with me…) the required 70/80 intersection. This time we headed too another right turn to go explore the town of Old Perlican, a fishing village with a fairly large harbor full of fishing boats.

We avoided yet another ride through the required 70/80 intersection by leaving Old Perlican on the south end of the village and joining up with highway 80 there.

The new challenge was the emerging cells of rainfall that were forming out on the water west of us. The wind was pushing that weather to shore, and we were riding the shoreline. The faster we got our asses south, the better.

In spite of our desire to race the oncoming rain, we did stop for a few minutes at a convenience store in Winterton to hydrate.

Following TC1 west, we (unfortunately) needed to travel towards the region where the sporadic rain was coming from. The puffy white clouds from earlier today become much darker with broad flat bases. Lucky for us, in the 63 miles we had to travel to our next hotel, we only got caught in a few very minor showers.

One point of trivia about this stretch of TC1: it follows a narrow spine of land between the north and south coasts of Newfoundland. If you watch for it, between the towns of Sunnyside and Come By Chance (another fun name), you can see both coasts at the same time.

We pulled into our hotel for the night in Clarenville right around 5pm. Considering the amount of curvy, coastal, low-speed-limit roads that we’d traveled today, that was pretty good time.

While it could have been fun to venture out into the thriving metropolis of Clarenville and find the perfect dinner venue, our hotel had an on-site restaurant and we were being lazy.

The good news is that the relatively early end of the day meant we could indulge in a few maintenance items, like:

Here’s the traditional static map of the day’s ride, with the normal altitude overlay.

Here’s the new-style interactive map from the Scenic app.

We explore the next peninsula to the west along the north shoreline, in this case, the Bonavista peninsula.