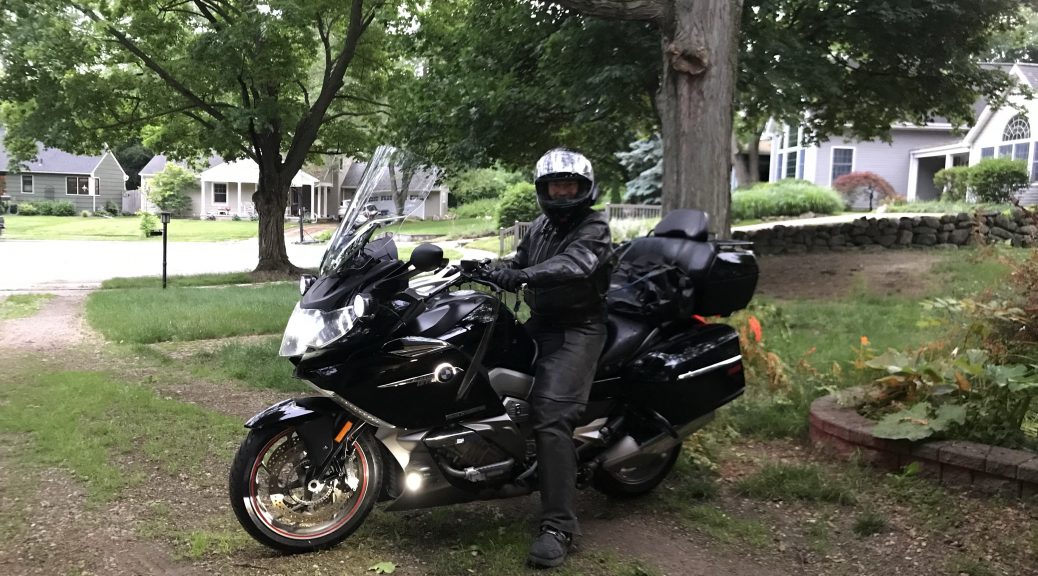 I begin yet another journey west for yet another party, but this time the reason and route have more significance than usual.

Many of you that know me already know, or have at least heard me speak of, my friend Redbeard Emeritus. Unfortunately, he succumbed to cancer earlier this year. In a very Redbeard kind of style, he asked that his life be celebrated in, not one, but two parties, in two different seasons, in two different time zones.

What can I say, Redbeard was a nationwide kind of dude.

The first of these celebratory gatherings is out in Redbeard’s home state of California. Me, being me, noted the long distance this is from my home state of Michigan, not as an impediment, but as an opportunity to ride. I have several friends whose busy schedules prohibit them from taking off multiple weeks to ride to a party on the other side of the country; they’ll fly in and attend, which is better than not attending at all. For me, however, it would feel like a dishonor for me to do anything other than ride to a party commemorating a man who rode his motorcycle sufficient miles to make most over-the-road truckers feel ashamed.

For this ride, it occurred to me to pay further tribute by following one of Redbeard’s favorite cross-country routes. For Redbeard, US50 was practically a coast-to-coast Main Street. At least that’s about how he used it.

So, for this trip out west, I decided to get south to US50 as directly as possible and then follow it west all the way to California.

Preparing for this trip included:

The Nightowl prep was fairly straightforward:

One of the vent zippers on my Vanson riding jacket separated. On other jackets, a vent zipper isn’t that big a deal. On this Vanson model, with huge vents on the front, it’s a bigger problem. I use a local shoe repair shop for repairs to my fine leathers and they were able to get the repair performed, albeit not until the day I planned to leave. Nothing like cutting it close.

At work, I’m currently embroiled in a serious service migration project. The good news is that I’m no longer a team of one (1), so there are several bright minds taking over my responsibilities to make this vacation happen. Hell, this is probably a bit of a vacation for them, a vacation from my (sometimes) overbearing personality. Unfortunately, I felt I just had to wrap up a few late changes so I found myself checking in my last work at about 7pm, long after my hoped-for departure window of 5-5:30pm.

Oh, and I hadn’t packed yet.

With help from the girls picking up a quick take-out dinner, I was finally sitting on the bike and pointed down the driveway at (gasp) 8:40pm.

The storm front was traveling to the southeast and I was heading south. All I had to do was get back in front of it. Unfortunately, the initial storm front, marked by high gusting winds and plenty of thunder and lightening, but little rain, had passed us about an hour ago. Consequently, it was very likely that I’d have to pass through the leading edge again to get out in front of it.

I rolled on, the sky grew dark
I put the pedal down to make some time

Tom Petty and the Heartbreakers, Running down a dream.

Aside from some light rain and road spray around Milan, I almost made it to Dundee before things started to go sideways, literally. That was about the time that I noticed the features to the southwest were disappearing behind a wall of water falling from the sky.

I had faith that, in a straight line race, the Nightowl’s six cylinders could easily outrun the most aggressive of storm fronts. The problem was that this bastard had a head start and had the angle to beat me to a point down the highway. The rain got harder, and the roads got a lot wetter, thanks to other cloudbursts in the leading edge of the storm front that had already passed. The worsening conditions necessitated a reduction in pace, which was excruciatingly frustrating since I could see the edge of the storm front, and the blue sky beyond it, probably less than 10 miles down the road.

I was trying to place myself in a gap between bunches of traffic in hopes of not getting drenched in road spray. That was when I saw the first car ahead of me, probably 100 yards away, hit his brakes.

What happened next was confusing. First I saw brake lights, then I saw the side of the car, followed by it’s headlights. He proceeded to slide from the left lane, across the right lane, and off the shoulder and down into a shallow ditch that led up the fence separating the highway from the neighboring woods. He didn’t flip. He didn’t hit anything. He just slid through the tall grass and came to rest against the fence and before the trees.

Other than needing a change of underwear, I figured that the driver and passenger were unscathed, so I selfishly proceeded without stopping.

That, I confess, was the highlight of the evening. As predicted, I broke out from under the storm clouds in the Toledo, Ohio suburbs and had clear sailing the rest of the night’s ride.

I originally hoped to catch US50 at either Chillicothe or Hillsboro, but my late start negated that desire. I decided it was fine to skip that first ~80 miles of US50 in favor of skipping it’s winding path through the heart of downtown Cincinnati and the guaranteed festival of stoplights that would accompany it. During a gas stop, I scoped out a relatively cheap hotel between Dayton and Cincinnati and reserved a room. I could skirt the outer Cincinnati suburbs in the morning and catch US50 near the Ohio/Indiana state border.

Here’s a video I threw together of the highlights of the day.

The hotel was fine. The fact that this is right smack-dab in the middle of a cicada hatch made things interesting. They were all over the place and seemed overly focused on getting inside the back door of the hotel. Every time I opened that door to ferry something to/from the Nightowl, at least one but snuck in. Given the number of lifeless cicada corpses littering the floor of that stairwell, I’d say they may have wished they stayed outside.

Using some video from my new INNOVV K5 dash cam unit, I make a quick video of the spin out and wrote up a post for the day in the WordPress app for the iPad.

I found that I could update an existing post, but I couldn’t add a new one. I dug into the forums and found one suggestion to log out of your wordpress.com account and back in, do force the app to get a full set of new data from the server. It was late and I was frustrated, so I gave it try. When I logged back in, my entire new post, that I’d just been working on for nearly an hour, without backing it up, was gone.

I was too tired and too frustrated to write it again, so I went to bed.