When Karen and I travel out to Mitch and Kathy’s, we usually leave after work on a Thursday and ride as far as we can that night. This leaves a manageable ride on Friday, resulting in an arrival time before dinner so we can have a full evening communing with friends that we see all to rarely. However, for the trip home, we have two full days (Sunday and the Memorial Day holiday on Monday) to travel so we generally indulge in a longer route that involves fewer miles on the superslab (that is, interstate) highways.
END_OF_DOCUMENT_TOKEN_TO_BE_REPLACED

We had a fairly easy ride from north of PIttsburgh to the Chesapeake Bay area to attend Mitch and Kathy’s MAMMARY Run. (By the way, that’s Mid-Atlantic, Myersville, Maryland, Annual Run, Yup.) We made good time eastbound along the Pennsylvania Turnpike to the crazy interchange-community of Breezewood, PA.
END_OF_DOCUMENT_TOKEN_TO_BE_REPLACED

Most would say that a boring motorcycle ride is, well, boring. However, when one is riding a familiar route, and last years day of traveling the same route was filled with wind, rain, and other nasty forms of weather, a nice uneventful ride can be quite enjoyable.
END_OF_DOCUMENT_TOKEN_TO_BE_REPLACED

After a spring filled with long-overdue bike maintenance tasks, I proceeded to engage in a big house project: replacing the roof on my house. As a result, it’s almost June and I have yet to take either bike on more than a day trip.
END_OF_DOCUMENT_TOKEN_TO_BE_REPLACED

The following are photos and a photo map from the trip down to Red’s MIAZ run.
END_OF_DOCUMENT_TOKEN_TO_BE_REPLACED

The final tally for the trip was 3866 miles in roughly 88 hours of travel time.
END_OF_DOCUMENT_TOKEN_TO_BE_REPLACED

After a good night’s sleep at the Super8 in Troy, Illinois, I checked weather and concluded that there was less chance of rain if I went home via Chicago instead of Indianapolis. In hindsight, maybe I should have taken the chance on the rain along the southern (and warmer) route.
END_OF_DOCUMENT_TOKEN_TO_BE_REPLACED

Truth be told, this was a fairly uneventful day.

I got a late start because I took the time to write up the previous day’s post during breakfast (Texas waffle out of the Super8 waffle maker). It was still a little chilly with temps in the upper 40s (F) and broken clouds in the sky. The wind was in my face but not oppressive like the winds I encountered during the ride down.

I knew there was some weather in front of me. There was rainy weather out in Oklahoma City, Oklahoma to Joplin, Missouri and that system would be moving east-north-east, or basically directly along my path of I44. The question wasn’t whether I would catch the system, but when.

So, the day passed, the Vector droned on, and the miles rolled.
END_OF_DOCUMENT_TOKEN_TO_BE_REPLACED

The morning in Superior, Arizona was cool and clear. Checking the forecast for a few cities and towns along my route, it looked like there was a good chance that the nasty winds that I encountered on they way down were waiting to torture me on the way back too. It also looked like it would be chilly, with temperatures in the 35-50˚F range.
END_OF_DOCUMENT_TOKEN_TO_BE_REPLACED 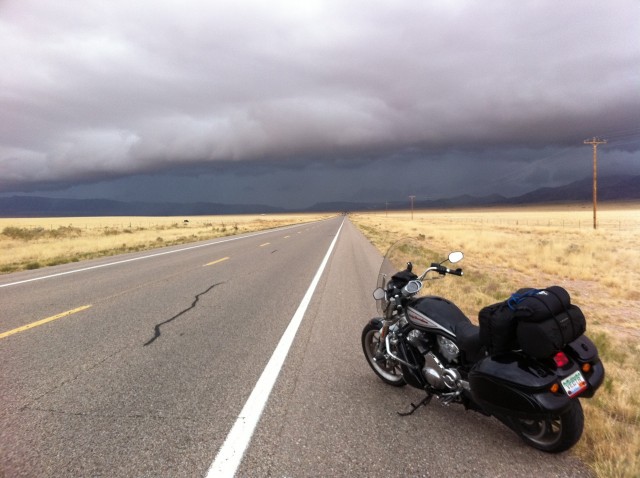