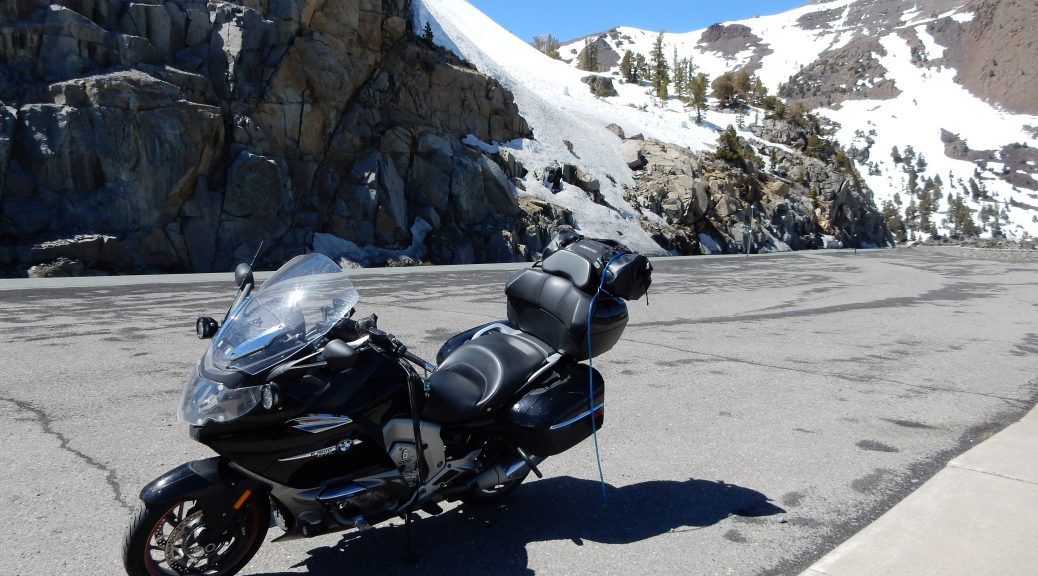 Compared to the last few days, the last ~350 mile ride into California was pretty uneventful. It was still a very enjoyable ride.

Having finished the previous day’s ride report at a reasonable hour (before midnight, gasp!), I got a good night’s sleep and was cleaned up, packed up, and ready to go by 9:30am. (Somewhere, by friend Fins just felt the chill of hell freezing over.)

It was a bright, sunny morning. The wind was still blowing out of the north-northwest, but not anowhere near the crucifiying velocity from the evening before. In spite of the abundant sun, it was still a chilly 45º F (not including wind chill), which dictated the full court press of long underwear, heated gear, and turning on the heated grips and seat.

The basic plan was to head west to US395 via CA120, turn north to ride to Carson Pass (CA88), and then on to my destination at Valley Springs, CA. That plan was immediately scrapped when I found that CA120 was closed, at least according to Google Maps and Waze. Apple Maps routed me through CA120 but then indicated that some of the roads in that route may be closed for the winter. The Caltrans Quickmap didn’t say anything about CA120 being closed east of US395, but I wasn’t about to ride the 40 miles to CA120 only to find it closed and have to backtrack. That sent me north through Hawthorne and Yerington and weaving southwest on back roads to pick up US395.

Making Time in the Desert

Two nice things about the remote desert roads in Nevada:

The result is that the first 100 miles of this trip went by pretty fast. With the exception of one or two low passes, US95 stuck to the desert pan between the mountains, providing wide open views of the surrounding ranges. Occasionally, you’d get a break between mountains that gave you a look west at the snowy Sierra Nevada range far off in the distance. I was acutely aware that I still had to cross that range to get to my destination, but I wasn’t expecting much in the way of snowy roads.

As I pulled into Hawthorne, I notice the countless bunkers that peppered the landscape at the military base there. I found out later that the base at Hawthorne is a ordinance disposal facility. They store a bunch of old ammunition and artillary shells and dispose of them as need be.

A strange thing happened when I pulled into downtown Hawthorne. About 100 yards before my scheduled turn north, Waze bleeped at me and changed the direction to send me south at the same intersection. Puzzled, I turned south but then immediately pulled over the figure out what the app was doing to me.

I knew that the roads west of Yerington (further along my original path) were next to a river that was currently at flood risk because they were emptying a nearby resevoir that was almost overflowing with the extra winter snow melt. I surmised that one of those roads had been compromised by the flooding, making the route longer and causing Waze to change it’s mind on the fastest route to Carson Pass.

Fine, I guess I’ll listen to the damn thing and take this road instead.

NV359 is another lonesome road gently curving along the bottom of a mountain range to the west. Eventually, the road turns west and climbs a pass and dumps you out onto a never ending straightaway into California. If this sounds boring, it isn’t; the view does not suck.

I rode the straight and stared and the snowy mountains as they grew bigger, casting a blurry reflecting in Mono Lake to the south.

Which Pass to Take?

In short, I really didn’t have a choice which pass to take across the Sierra Nevadas. Turning north up US395, I was already north of the aforementioned CA120, which was closed for the winter through Tioga Pass.

A view of the Sierra Nevadas from Bridgeport, CA.

The Nightowl takes a quick rest at a gas stop in Bridgeport, CA.

I continued north, hoping that CA108 through Sonora Pass had opened over the last few days. Nope, it was still closed.

That left Carson Pass via CA88. I’d taken this pass several times over the years, and as a fallback position, it wasn’t much of a downgrade.

The bad thing about approaching CA88 from the south is that US395 (the road I’m on) and CA88 (the road I want to be on) run parallel for several miles south of Gardnerville, NV and I really wanted to cut over to save some time, but the combination of backroads, parking lots, and sidewalks necessary to take that secret shortcut escaped me. I played the part of the good citizen and rode all the way to the US395/CA88 intersection and turned west on CA88.

Taking CA88 through Carson Pass is an especially nice trip on a motorcycle. I say nice because the curves aren’t especially twisty. The road climbs through a canyon or two, crosses a high valley, and finally hugs the sides of cliffs as you pass by overlooks that provide views of the rest of the mountain range and several lakes.

Given the relatively early time of season (mid-May), there was still plenty of snow towards the summit of the pass. The lakes, which were usually good for catching reflections of the nearby mountains, were sheets of frozen white.

Red Lake along Carson Pass is still frozen in mid-May.

Still plenty of snow in Carson Pass in mid-May.

The Nightowl at Carson Pass.

Farther down the western slope of Carson Pass, there’s less snow and the lakes aren’t frozen.

The road surface was in good condition, but the turnoffs for photo opportunities were still filled with sand and grit from the winter road treatments. The Carson Spur region (just west of the summit) showed signs of some damage over the winter. The road was rough but still completely passable.

Down from Carson Spur, the curves relax and the pace quickens. In another 30 minutes I was entering the town of Jackson and preparing to turn south.

I was immediately looking for a place to pull over for a wardrobe change. Now that I was down in the foothills, the temperature was now over 80º F and I was cooking in my long underwear and heated gear (even with it turned off).

After traveling south on CA49 over Mokelumne Hill, I turned right on CA26 and immediately pulled into a small business parking lot (they looked closed) that happened to have a nice shady spot.

I proceeded to remove the heated jacket liner, swap from the heated gloves to my perforated gloves, and ditch my long underwear bottoms and socks. (Yes, I dropped trow right there in the parking lot; I was behind the bike so I wasn’t exactly bearing my ass to the world). For the first time in several days, I remounted the bike not feeling like a stuffed sausage in my leathers.

A few miles later I was through Valley Springs and pulling into Fins and Vina’s driveway.

While it certainly had it’s challenges, the 2,678 miles covered in the last six days were an enjoyable ride. The Nightowl behaved beautifully and we can both take a rest for the next two days before turning around and heading back east… after all, there’s another party to attend in the Chesapeake Bay area next weekend.

Here’s the route and altitude maps for the day.

The route for day six of the SPITS run, with an overlay of altitude.

The altitude map for day six of the SPITS run.

2 thoughts on “California at Last”