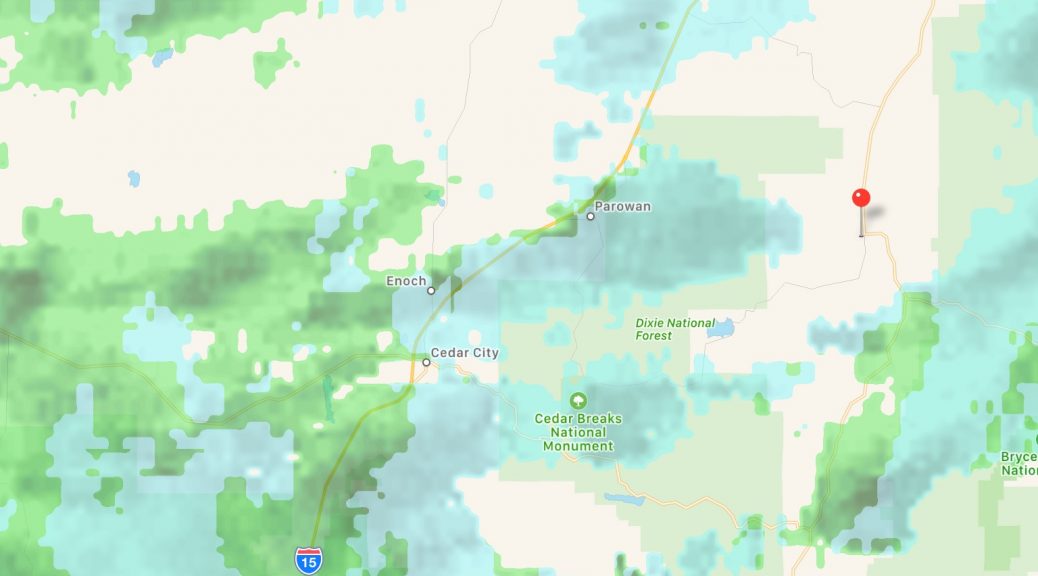 The snow is falling outside my motel room door. This, by itself, is not overly damning since it’s basically a flurry and the roads are wet but not accumulating. The problem is the roads over the mountains to the west.

I woke up at 7:30am and immediately grabbed the iPad and started looking at the Utah Department of Transportation road cams. The story they told is pretty damn bleak. Here’s their morning road condition weather alert for the state.

My original route high through the mountains past Cedar Breaks National Monument is entirely impassable to cars, much less motorcycles. The alternative route a little bit south off there along UT14 isn’t as bad (I can actually make out the road), but the road is still covered in snow with tire tracks through what is probably slush. I could probably baby it through there but I’m hoping for a better option.

To the north is UT20, a shorter (20 mile) and lower pass through the mountains. Web cams show the roads wet but the snow is blowing heavily enough that the west-facing camera’s lens is covered with snow. If I take this route, I have to turn south on I15, which looks passable up until the road hugs the mountains to the east near Cedar City. Still no accumulation there, but the flurries are a lot heavier. The Cedar City forecast calls for the snow to turn to rain in the next hour, so it may be an easier slog by the time I get there.

I already went out to the bike and pulled out the rainsuit; no way to avoid that today. I’m also getting out the polypropylene long underwear and socks.

I hear it’s going to be 90º at the SPITS party on Saturday.

Aside: I checked the web cams for Boulder Summit, the mountain pass I got snowed on yesterday afternoon. It’s a mess now but expected to clear in the next few hours. So I did the right thing in riding past Torrey. I just needed to ride through one more pass before I stopped for the night. <shrug> Live and learn.

One thought on “Upcoming Fun in the Snow”