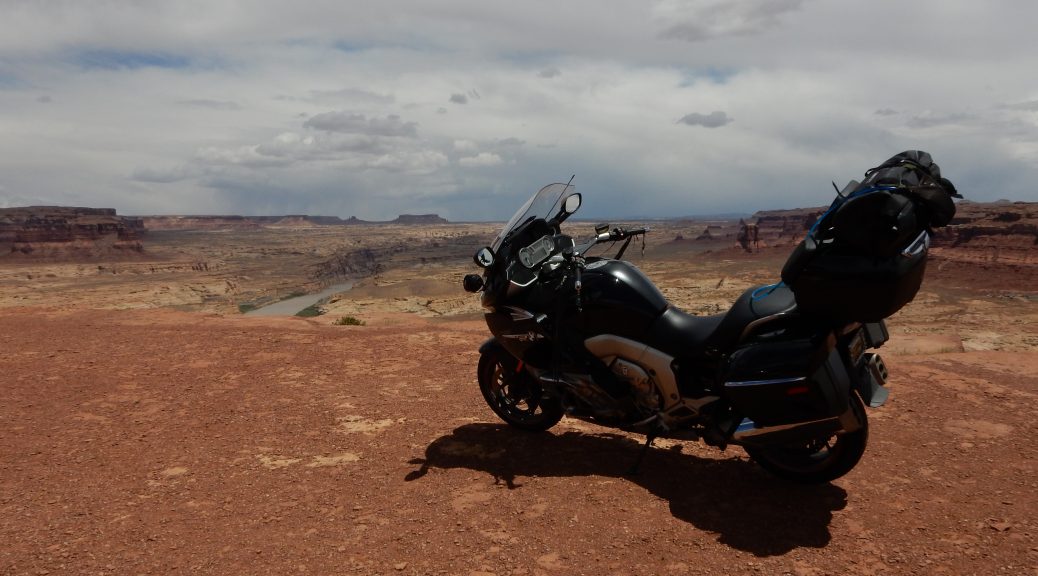 Since I rode further yesterday than planned, I was able to splurge an entire day to cross Utah and experience it’s natural wonders… and fickle weather patterns.

After my disappointing experience with he hotel wifi the previous night, I decide to try and upload photos again… and it worked this time. I proceeded to frantically babysit my iPad as it uploaded (very slooowwwwly) the photos from the previous day’s ride.

By the time that was done and I was almost done writing the trip post, there was a knock at my door. It seemed that it was already past 11am and if I didn’t want to pay for another night in this room, I’d better move my fat biker ass the hell out of this room, and in 10 minutes too.

So I guess that trip report will have to wait until I find better wifi.

I chose to stop for a gas and weather check in Blanding. Even though I had over 100 miles reading on the miles-to-empty gauge, you just don’t venture between Blanding and Hanksville without a full tank. It’s just not done.

I could see that there was a line of rain in my path between Blanding and Glen Canyon, but it didn’t look heavy. Sure enough, about 20 miles out of Blanding I could see the telltale gray curtain of wet stuff hanging in the air under the  dark clouds in my path. As has become normal for this trip, the weather gods smiled upon me and directed the nasty part of the rain to miss me. I was in a light shower for a minute or two, and I was through. While the lack of heavy rain was certainly a point of good favor, the accompanied 13ºF drop in temperature was not quite as comfortable. I was already wearing my Gerbing jacket liner and gloves, so I turned up the heat a bit to stave off the chill.

As fate would have it, I was turning that same heat back down 30 minutes later as I rode out from under the clouds and into much sunnier skies. I’d never ridden my beloved UT95 this early in the spring. The colors of the landscape are more dramatic when the brush/grass/foliage is so green, before it fades in the heat of the late summer, which is usually when I make it through here.

A few miles after you ride west over the steel arch bridge that crosses the Colorado River, you start climbing the west wall of Glen Canyon. Just before you crest the initial canyon wall, there is an innocent little sign that says Scenic Overlook.

You will turn here.

The Hite Overlook is one of my favorite places on earth. The view is fantastic, and it makes an epic backdrop for a vanity photo of your beloved motorcycle. (I’ve made this pilgrimage with all of my motorcycles over the years.)

Having been here so many times, I always take note of the river level. I had hoped it would have been higher, given that this is prime-tie for winter runoff. Unfortunately, the river (or more precisely, Glen Lake) is not back to full height. It is, however, significantly fuller than last visit in Oct 2013 with Yo Adrian, though that’s still not nearly full enough to make the boat launch at Hite useful again.

Looking north from the Hite Overlook at Glen Canyon.

Looking south from the Hite Overlook at Glen Canyon. Note the concrete boat launch pad that is still far, far away from the actual water.

Not much happening at Hite since their boat launch is useless.

The Nightowl on the west shore of Glen Canyon (looking west).

A panoramic view of Glen Canyon from the Hite Overlook.

After climbing out of Glen Canyon, I enjoyed an uneventful sunny blast to Hanksville. I could see that the mountains to the far west had snow near their peaks and ominous clouds were forming just past them. I’ll have to keep an eye on that.

I arrived in Hanksville with plenty of gas to make Torrey, so there was no need to stop.

Note: That old truck that Yo Adrian so lovingly photographed the last time I was through here is gone. Scrapped? Restored? Alas, it must remain a mystery.

I had pleasant sunny conditions for the ride over to and through Capitol Reef National Park. I stopped in a few places to snap some photos and it was on to Torrey.

The Nightowl at a roadside trailhead at Capitol Reef NP.

A look down the river canyon at Capitol Reef NP.

Sixty percent of the RVs in this photo are rental units.

The Nightowl at Panoramic Lookout in Capitol Reef NP.

A view west from Panoramic Lookout in Capitol Reef, NP.

Tourists play on the rocks in Capitol Reef NP.

A view west from Panoramic Lookout in Capitol Reef NP.

As I pulled into a gas station in Torrey, I could see snow clouds rolling over mountains that overlook the town from the south. A quick consult of the weather radar showed spotty light rain and snow but not heavy. A look at tonight’s forecast was more alarming: two to five inches of accumulation in the mountains with heavier amounts in some ranges.

Shit. Didn’t we just do this yesterday?

I could have stopped in Torrey for the night, but like yesterday, I elected to push through some dicey weather now in favor of the possibility of having no passable route if I waited until morning.

The run up the mountains south of Torrey on UT12 started with a ride through yet another pocket of rain. This was the heaviest rain I’d see so far this trip, though it was still light enough that, as long as I was moving fast enough to hide behind my fairing/windshield, adding the rainsuit would be unnecessary. I did, however, need to crank up the Gerbing equipment again, as the combination of rain and increasing altitude was making the temperature drop rapidly.

Nearing the summit of this pass (which does not appear to have a name), I had yet to encounter further precipitation. It was with this false sense of confidence that I chose to stop at an overlook to take photo. A part of motivation was because the last time I was through here with my friend Yo Adrian in 2013, we were traveling at night in very cold conditions and didn’t to bother to stop at this otherwise worthwhile viewpoint.

A view south from the mountain pass on UT12 south of Torrey. If it looks slightly foggy, that’s not fog, its a snow flurry. Better get moving!

As I turned to walk back to the Nightowl, the snow began to fall.

It wasn’t big fluffy flakes or heavy enough to induce whiteout. It was just a medium flurry of little flakes that were blowing around more than they were accumulating on anything. Still, I didn’t waste time for an in-depth analysis. I got my ass back on the Nightowl and headed south, with renewed diligence in watching road conditions, and setting the Nightowl’s traction control to Rain.

I was in the snow on and off for the next 15 minutes. While it did get thick enough to limit visibility a bit and start accumulating on my windscreen, it never got the road wet. Compared to what could be up here tomorrow morning, this was a risk well worth taking.

Down to Escalante and Bryce

The remaining ride down to Escalante was quite nice, though my favorite ridge-running part of UT12 was down to one-way traffic so I wasn’t able to stop for photos. I just love that stretch. You’re running the ridge on a finger of rock between two canyons. As the ridge thins, you reach a point where you can look down into one canyon on the right and another on the left. There’s barely room for a shoulder for the road. Very cool.

The construction looked like there were burying a sensor cable in the road, perhaps to detect when frost heaves or cave-ins damage the road. The downside for us bikers is that they installed this cable into a slot they cut in the middle of the southbound lane and covered it with asphalt sealer. That means you have about 10 miles of nice twisty road with a big fat 10″-wide tar snake in the middle of the lane. That will be fun to ride on in the full heat of the summer.

Random Observation: Compared to previous visits, it looks like there’s been a fair amount of new development in Escalante, and it’s nice stuff too (at least architecturally).

I stopped at Bryce Canyon to look for a room. That’s not to say I expected to get a room anywhere near the entrance to Bryce Canyon National Park; I know all of that would be booked solid. What I actually did was stop in a gas station parking lot to use my phone to look online for rooms in the area. The nearest available room is in Panguitch, which is about 20 minutes away in the general direction I need to go. I book it, mount up, and head down Red Canyon to US89.

Thank the gods of internet access: the Days Inn in Panguitch has good WiFi. I was able to finally publish the trip post from yesterday and get to work uploading the photos for today’s ride.

The front desk staff at the hotel suggested that a biker type like me would surely enjoy the offerings at the Cowboy BBQ Restaurant.

After a three-block walk over to the Cowboy BBQ (reminder, time to replace my boots, or at least install some new insoles), I arrived to find four parties in line ahead of me waiting for tables. Waiting in lines without WiFi can be a terrifying (and boring) thing, but the staff at the Cowboy BBQ were able to seat me in about 10 minutes. The pulled pork was very good, not quite as sharp as some mesquite-flavored concoctions I’ve had over the years, but sweeter and with perfect texture. The side of beans had plenty of bacon in it and the side of mashed potatoes was covered in a nice (for me) peppery country gravy. I topped that off with warm peach cobbler ala mode.

The walk back to the motel reminded me of what was in store for tomorrow; it was getting cold.

Here are the route and altitude maps for the day. As usual, the route map has a color overlay indicating altitude.

Route map for day three of the SPITS run, with altitude overlay.

Altitude map for day three of the SPITS run.

As mentioned earlier, there’s yet another cold front moving through overnight and the weather service is calling for 2-5″ of snow in the mountains with higher amounts in certain ranges. The weather for Panguitch calls for rain in the morning that ends early in the afternoon. The forecast for Cedar City, the closet town on the other side of the mountains, calls for a similar forecast.

I had wanted to ride through Cedar Breaks National Monument tomorrow, but since that it high in the mountains, it will likely be covered in snow. If I stick to the valleys, I should be able to get by with just wet roads and chilly temperatures.