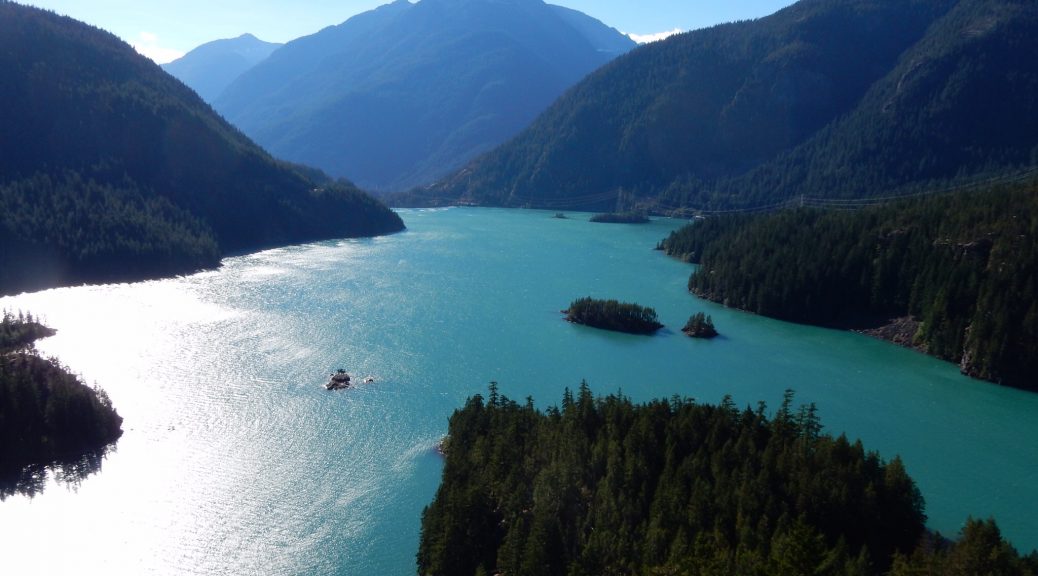 With Karen added to the ride, we would indulge in a short ride and take in the best features of the North Cascades Highway. 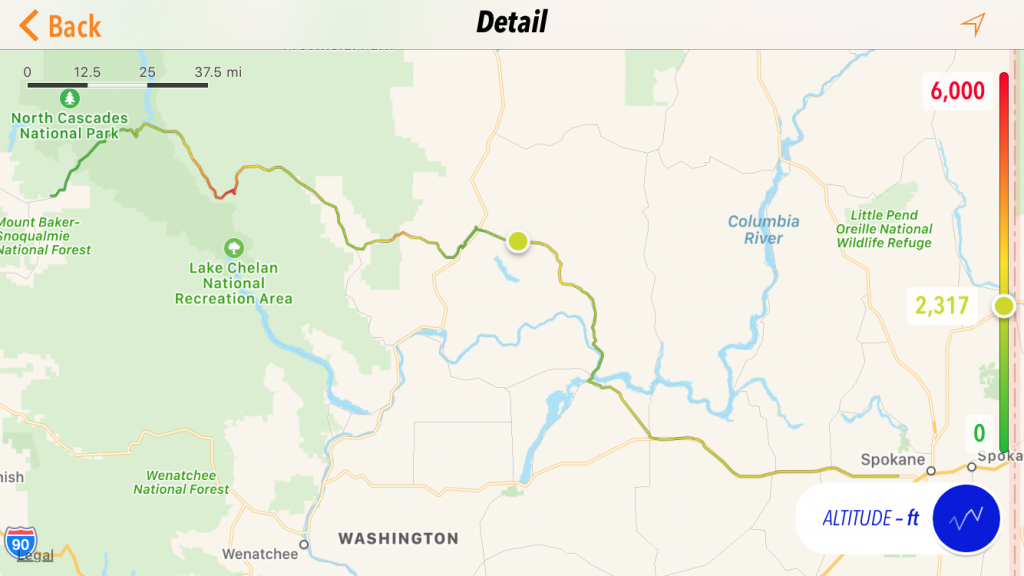 When someone says Pacific Northwest, most people imagine the commonly abused term, Pacific North-wet. That may be somewhat true west of the Cascade mountains. East of the Cascades, however, the land is dry and the foliage sparse. There are plenty of irrigated fields that add some green (or grain yellow) to the landscape, but no matter how you slice it, eastern Washington is a dry, hot, place. Having said that, there are conifer forests in some of the higher hills, and we would travel through a few of those on our way west.

US2 ran just outside the front door of our hotel and that is was we started on headed west. We traveled from small town to smaller town before eventually turning northwest toward the Grand Coulee dam and Lake Roosevelt. The lake takes you a bit by surprise. You’re riding merrily along over rolling farm land and desert scrub when you suddenly dip down into a ravine and start a serious descent down to the lake. You’re upstream from the dam so you can’t really see it until you enter the town of Grand Coulee. That’s when you can appreciate the size of this piece of civil engineering. Very impressive.

When we stopped for dam pictures at the dam visitor center. We struck up a conversation with a BMW GS rider who was pondering a map with furrowed brow, trying to pick his next route of adventure. We mentioned our intend target of the North Cascades Highway. He indicated that this is part of the Washington Circle Route and definitely on his bucket list, but he was looking for something else today. We left him to his map/GPS pondering and headed northwest.

Karen and the Nightowl at Grand Coulee Dam.

A fellow BMW rider that we spoke with at the Grand Coulee Dam.

Of the two routes out of Grand Coulee towards the US97 corridor, I prefer WA155 over WA174. WA174 is certainly more direct if you intend to visit points to the south, but it’s not as pretty (though the town of Bridgeport is certainly pleasant). The ride up WA155 provides a curvier road into slightly higher elevations (read: forest), but isn’t so tight that you need to allow lots of extra time.

We emerged from WA155 in Omak, waved towards our friends DP and Nancy to the north, and sought out a place to have lunch. We took shelter in some shade and consulted the Yelp app for our options. We headed back to the main drag through downtown Omak and eventually located Rancho Chico, a small Mexican restaurant. The menu must have offered 200 different items and the service was quite snappy. I swear we had barely set down our menus after ordering when our food was being set in front of us. Most convenient, and more importantly, very tasty.

During our meal, some disaster must have happened to the north side of town. We counted four patrol cars and two rescue units blasting through downtown headed off to render assistance. I’ll have to look up their news site and see if I can figure out what happened.

After lunch we returned to the bike and pointed the handlebars south. Just a few miles away, we turned east on WA20, otherwise known as the North Cascades Highway. The highway immediately makes a significant climb out of the valley and eventually ventures high enough that the high heat was reduced to much more comfortable temperatures. We did get stopped at a couple of one-lane construction sites. The first was rather long and was only tolerable because I had found a shady spot to park the bike for the 15 minute wait. Frustrating, but not fatal. The second delay was in the quaint tourist haven of Winthrop, where a two-mile long stretch of the road through downtown was one-lane only. Our luck was with us and we happened upon the line of backed up vehicles just as our direction was being allowed through the destruction zone. It was a damn good thing too; there were no convenient shady spots to hide in for this one.

West of Winthrop, WA20 gets much more remote and starts to climb higher into the mountains. The climb culminates in a single switchback in the shadow of a tall mountain cliff, leading up to Washington Pass. There’s a scenic overlook just west of Washington Pass. If you don’t stop here and take the short (150 yard) hike to the overlook point, you’re a moron. Enough said.

Ghost and Karen at Washington Pass.

Continuing west on WA20, you dip down and then back up through Rainy Pass. It wasn’t rainy today. Then it’s a long descent to the series of reservoirs in the Skagit River valley. First there’s Ross Lake, which you can just barely appreciate from the road. Then there’s Diablo Lake. There’s a scenic overlook for Diablo Lake just off WA20. Again, if you do not stop here and appreciate the views, you will be mercilessly ridiculed. Be forewarned, this overlook can often be quite windy. If you have a habit of removing your doo-rag during stops, you might want to leave it on for this one. You’ve been warned.

Continuing west takes you deeper into the valley, with begins to widen after the series of dams. You travel through a series of small towns with even smaller collections of quaint shops, inns, and eateries. One of those towns is Marblemount. One of the quaint lodging establishments in (or just west of) Marblemount is the Totem Trail Inn. I was familiar with this small strip motel. Aitch, Mary, and I had stayed here several years ago when were were traveling together to the Par-Tay. The good news was that its fairly dated decor had been significantly updated since then. The bad news was that their wifi was down. Oh well. We moved in and made our way the four miles back to Marblemount for dinner at the Mondo restaurant.

Mondo was a schizophrenic eatery. It was a combination restaurant, gift shop, sports bar, and beer/wine takeout store. Their food offerings were also widely varied. The long list of traditional American fare was augmented by a equally long list of Asian fair. I can attest that the chicken teriyaki is quite tasty and comes in a large enough portion for two.

After dinner, we stopped for gas, a few adult beverages for later that evening, and returned to the motel.

Get up early so we can make the 1:15pm Coupeville/Port Townsend ferry (there is some drama here that I will explain in tomorrow’s report). Then head down US101 along the Hood Canal and on to the Par-Tay.