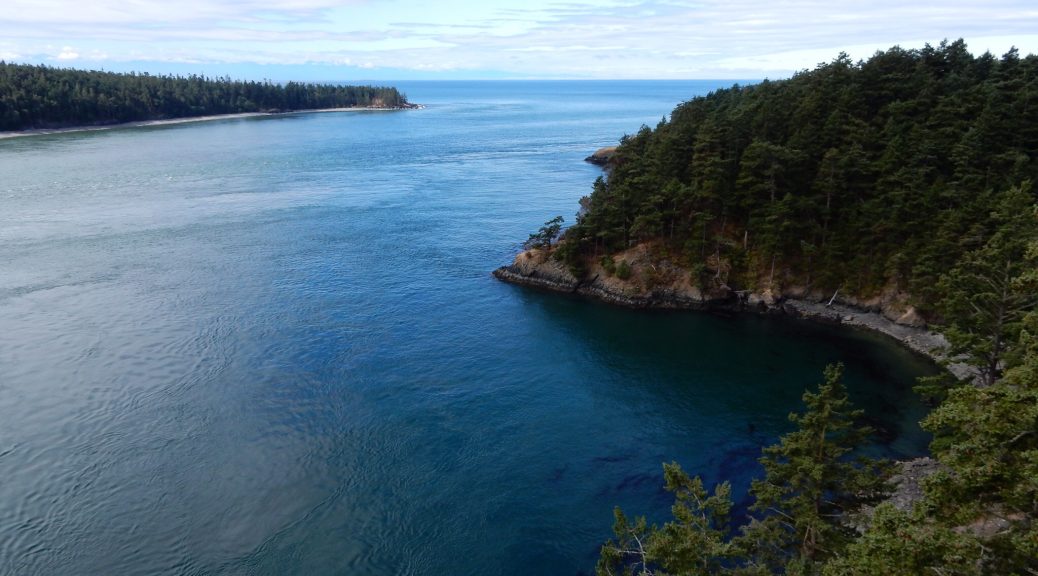 For today’s ride, Karen and I would cross Puget Sound (we hope) and ride down the Hood Canal to the Par-Tay.

The previous evening, a few text messages to/from my friend Phil, who was also arriving to the Par-Tay from the north, alerted us to the numerous cancelations of the Coupeville/Port Townsend ferry. There were two ferries that ran this route and one of them was out of commission. I found out later that the stricken Salich ferry got into trouble when some idiot put a crab pot too close to one of the ferry docking points. The prop caught the buoy line for the crab pot, wrapped it around the prop blade and rudder, and bent up the rudder something awful. That basically meant the half of the ferry crossings had been cancelled.

I was on the road and not exactly in close contact with world events, so I was the last to find out about the ferry dilemma. Phil and his wife Shana had already changed their reservation from the cancelled 10am ferry to the 1:15pm ferry. I tried to get a motorcycle spot on that same ferry but all the reservation slots were gone. The good news was that the ferry company never reserved every spot to allow some of the ad-hoc passengers to still get on first-come, first-served.

That meant that, even though we had an easy day planned for only ~190 miles, we would have to forgo sleeping in and get our butts on the bike and to the ferry early for the 1:15pm departure… and hope for the best.

Ride to the Ferry

I hate setting alarms when I’m on vacation, but today certainly demanded such. Even so, we didn’t exactly force ourselves into action at the butt-crack of dawn. We got ourselves dressed, prepped, and finally got on the road just after 9:30am, with plenty (we hoped) of time to get to the ferry early enough to get on board with Phil and Shana, and perhaps even have time for a bite of breakfast/brunch/lunch.

It’s only about 90 miles from our motel to Coupeville and we were already past the bulk of the Cascade Mountains. Consequently we made good time along WA20 through the small towns down towards the Puget Sound coast. Eventually, we were maneuvering our way through Burlington and under the dreaded I5, which we wouldn’t have to deal with today (thank the road gods).

West of the I5, WA20 becomes a four-lane and a whole lot more congested. WA20 is the main drag all way way down Whidbey Island, so it gets nearly all the through traffic. Only the locals know the secret routes that can bypass some of the more troublesome sections of WA20 out on the island.

Still, by the time we reached Deception Pass, we were doing quite well and decided we had time to stop on the north side of the pass and take a few photos. The tide was coming in with a vengeance and the flow of the sound under the bridge looked more like a fast river than an ocean bay. A tourist boat had to work very hard to fight that current on it’s route under the bridge.

A distant point from Deception Pass.

Deception Pass. The water is really moving; it looks like a river.

A beach at Deception Pass.

South of Deception Pass is the Whidbey Island Naval Air Station and they had a pair of jets doing touch-n-go maneuvers on the runway. This meant you had surprisingly slow flying fighter jets circling overhead and crossing low over the road when on their final approach. Even with the helmets and the engine noise, it was very easy to hear the rumble of the jets as they passed.

We were still doing very well on time when we pulled into Oak Harbor, so we diverted into the historical downtown region to find a place to eat. We must be on a Mexican food kick, since we selected the Noe Jose Cafe as our breakfast/lunch venue. The special of the day was cream cheese stuffed French toast with raspberry topping. It sounded so good, Karen and I both selected it. It lived up to expectations and was consumed with relish and abandon.

Ghost backs up the Nightowl in Oak Harbor, WA.

We pulled into the ferry staging area at 12:35pm. We paid for our passage and the attendant stated that we had a very good chance of getting on the next ferry (at 1:15pm). He directed us to join a row of other motorcycles; it looked like we were about the eighth bike in line, but one of them was hauling a trailer.

Ferry crews like motorcycles because they can go in all the narrow nooks and crannies at either end of the boat. If you’re lucky, you’re some of the first vehicles on the ferry, which (more importantly) means you’ll be some of the first vehicles off the ferry and won’t have to wade through the parade of cars all trying to leave the destination on the same highway. If you’re not so lucky, the ferry crew adds you as the last few vehicles at the back of the boat. You still get on, but you don’t get to leave the ferry until nearly dead last.

Having arrived, we parked the bike in our designated lane, dismounted and walked around to bide our time. I found Phil’s Jeep fairly easily but he and Shana were nowhere to be found. Right on cue, I received a text message from Phil:

Phil: We’re at the ferry.

Ghost: Liar. We’re looking at your Jeep and you’re not in it.

It turns out they were grabbing some food a little down the road at a cafe. Pretty soon I could see Phil walking toward us waving in recognition. Shana joined us a few minutes later (after her fries were ready) and we caught up to kill the time.

Soon enough, the ferry arrived and we made our way back to our vehicles while the ferry unloaded. They loaded a few large vehicles in the middle first, then they grabbed the first set of motorcycles. We crawled forward and, sure enough, the attendant halted us before we could join the first set of bikes on the ferry. Bummer. They proceeded to load most of the remaining vehicles in the parking lot (including Phil and Shana’s Jeep) before finally taking another half-dozen motorcycles to fill the smaller spaces at the back.

In a nutshell, drama averted. We got aboard as planned.

During the crossing, we gabbed some more and I took a few photos. After docking, we slowly trailed the procession through Port Townsend and made our way to US101 south.

Ride Down the Canal

There are two ways to get from Port Townsend to Shelton:

Karen prefers any route that follows a shoreline, so we were taking US101. For a mid-afternoon on a Friday, the congestion wasn’t that bad. More importantly, the fleet of RVs that usually clogged up the works were nowhere to be found. I didn’t shed many tears for their absence. After a fairly brisk ride down the canal, we found ourselves in Hoodsport, which is the home of (among other things) the Hardware Distillery, makers of fine adult sipping beverages. The tasting room was open and the owner, who we’ve met before a few times, was handing out the tastings, complete with an interesting history of each concoction. After sampling many interesting offerings, we settled on two: a cherry liqueur called Cat’s Pajamas and a cardamom-flavored aquavit. Since Karen could obviously not carry these with her on the flight home, I would have to find a place to stow them in the bags. For the short remainder of today’s trip, Karen’ simply held the bag containing the well-packed bottles in her lap.

A few miles south of Hoodsport, you leave the canal and head inland towards Shelton. My friend, who hosts the Par-Tay, has a secret way out to his place that skirts the northern edge of Shelton and avoids many a traffic light and congested intersection. Unfortunately, I only use it once every few years, so I’m never sure I’m going to remember it correctly.

Apparently senility hasn’t completely kicked in for me.

I found my way out to our gracious hosts and we proceeded to greet the earlier arrivals (we somehow beat Phil here) and set up camp. Our hosts stuffed us with salad, garlic bread, and lasagna for dinner. Rest assured that nobody went hungry.

Not a damn thing. We’re going to hang out, kibitz with good friends, and eat barbecue until we’re in a stupor.