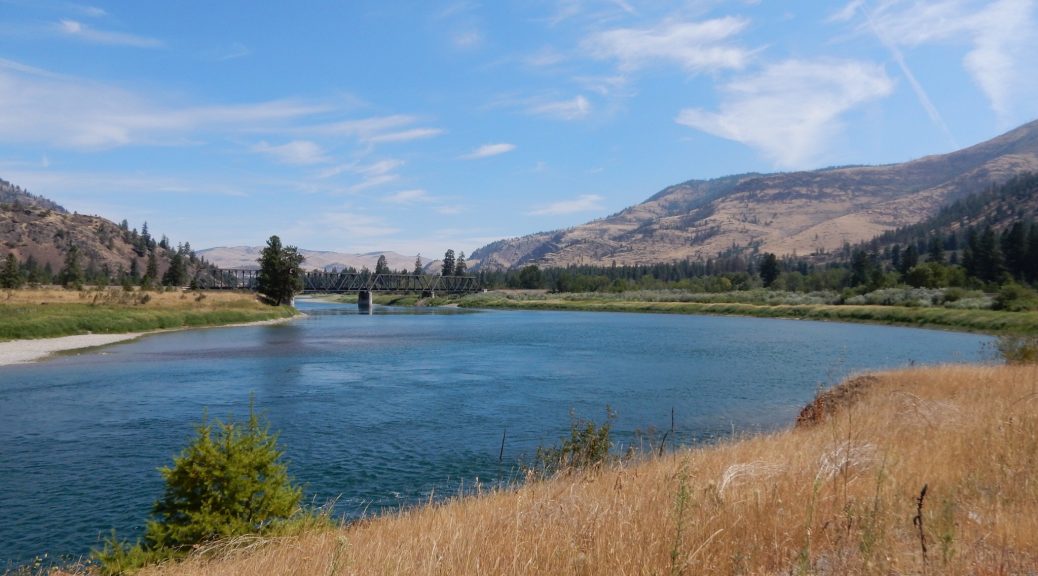 Today I had a short distance to go and a long time to get there. What to do?

Today was the day I would pick up Karen, who was flying into Spokane. Since she wasn’t boarding her flight until after a full day’s of work, she would be arriving late in the evening around 10pm. I, meanwhile, was starting the day from Missoula, MT, which was only about 185 miles away from Spokane… if you took the direct route that is I90.

I would allow no such tragedy to occur.

Sarcasm aside, the stretch of I90 from Missoula to Spokane is quite scenic. You follow a few river valleys and wind your way around and over a few mountains. Unfortunately, I’ve traveled this stretch of I90 (probably) a dozen times. My planned 100-mile-detour for the day was burned away by the fire along the Lolo Pass route (US12) to the south. If I couldn’t go south, I would go north and follow (roughly) the path of the Montana Rail Link mainline from Missoula to Sandpoint, ID and then turn south to end up in Spokane. The planned appealed to me for non-motorcycling reason too: I have hopes to build a model railroad layout someday that approximates this very same stretch back when it belonged to the Burlington Northern.

The previous evening had dried the Cody rain from my tent, except for the floor. This was quickly remedied by tipping the tent upside down in the sun afforded by the neighboring campsite (they were early risers and were long gone).

While I waited for evaporation to occur (a watched tent never dries), I conversed with another pair of campers, one of the two couples that were in the lukewarm tub with me last night. They were both between jobs and traveling the country until the money ran out. Sounds positively bohemian; color me jealous. I also took the opportunity to photograph the local wildlife.

After gassing up, I jumped on I90 for a brief stretch west to pick up US93 north. North of I90, US93 immediately starts a climb into the mountains. Railroaders refer to this grade as Evaro Hill, named after the tiny community at the crest of the grade. (Did the community precede the grade or the other way around?) From there, the scenery opens up a bit and you continue north through the Jocko River valley to Ravelli.

A lot happens at the Ravelli junction:

The rest of the ride northwest to Sandpoint is pleasantly scenic. The road rarely leaves the river bank for long. The valley walls vary between craggy cliff sides and rolling forested hills. There’s a dam at Thompson Falls that forms a nice little reservoir, and eventually the river empties into Lake Pend Oreille just west of the Idaho border, which is also where you pick up an hour if you’re going west; Pacific time.

A train trestle over the Flathead River along Montana highway 200.

The Nightowl didn’t need fuel at Sandpoint, but I did. I hadn’t eaten breakfast and was ready for something to eat. Sandpoint had the usual chains of fast food restaurants, but I was looking for something local. My search was rewarded with the discovery of Dub’s Drive In.

Technically, the establishment is misnamed. The drive-in window was apparently taken down a while ago, but you can still walk in and order from a wide selection of burger/topping combinations and top it off with truly immense soft-serve ice cream cones. I dined on my bacon cheeseburger and fries and returned to the counter for a ice cream cone. I ordered a medium chocolate/vanilla swirl with rainbow sprinkles (as opposed to chocolate) and the girls behind the counter exchanged knowing looks and asked me if I was sure. After an explanation as to the massive platoon-sized portions of ice cream that they distribute, I dial back my order to a small, which was still too big to eat by hand. The girl behind the counter was already ready with a 20oz styrofoam cup in hand and even taught me the proper technique of tipping the cup upside down, lowering it over the cone and then inverting the cone/cup together. She handed me a long spoon and I was off to consume my 2000 calorie dessert.

Here’s where we enter the people watching portion of today’s report. The booth next to me was occupied by a teenage couple. I didn’t notice the young man much since the girl was the very picture of youthful beauty. She was slender, petite, and clad in a short-skirted sun dress, the kind of thing you might see worn over a bathing suit. Her hair was a slightly ashen blond that fell in gentle waves to about her shoulder blades. She was just about exactly what I would have been obsessed over as a seventeen year old.

While I was eating my late lunch, these two were obviously engaged in a disagreement. He was giving her the silent treatment while she randomly interjected something every 30 seconds or so in an attempt to start a conversation. I didn’t really want to eavesdrop, but since I was only five feet away, I gathered that there was some disagreement on who’s set of friends they would be hanging out with that day and where they would go.

If left them for a moment to retrieve my aforementioned ice cream cone. But he time I returned, the disagreement was clearly solved. He had moved to her side of the booth and they were engaged in some light snogging. I felt bad for the guy that the make-up affection was cut short by the girl when I returned to my table. I couldn’t resist a comment, “You two make me wish I was back in high school.” This drew a good laugh from both of them and prompted a conversation. They both just graduated from high school. She’s going to college out of town that fall to study nursing. He’s staying in town to work with a concrete contractor. Ah, the challenges of growing up. They asked where I was from and expressed the typical astonishment that someone would actually ride a motorcycle across the country. They left just before me, climbing on two bicycles and riding away. I couldn’t help but wonder who won the disagreement. Where they going to the beach or somewhere else? Some questions are meant to remain a mystery.

I picked up US2 headed west, which followed along the Pend Oreille river until turning south at Newport (the Washington state line) and heading for Spokane. It was getting warmer now and I opened the vents on my jacket. The traffic density got a bit worse along this stretch, but there were passing lanes every few miles so it didn’t disrupt my pace too much.

Waze did a pretty good job of routing me through Spokane’s late rush hour (~6pm) without having to stop at 100 traffic lights. The waits at the few lights I encountered were all in the hot sun and I was beginning to reach medium rare, drinking my on-board water like a madman. Just about the time I was looking for a shady spot to take a break, I was directed to turn onto the on-ramp for I90 west. That would take me through downtown and on to the western suburbs that were home to the Spokane airport. One of those suburbs was Airway Heights, which is where I filled up with gas (first gas stop of the day) and checked in at our hotel room for the night.

After checking in, I had time to import some photos from the camera and write up a trip report (for an earlier day). I also had time to do a load of laundry. Eventually, it was time to hop back on the Nightowl and ride the few miles to the airport to pick up Karen. Her flight had arrived on time and she had no trouble finding me waiting in the loading/unloading zone.

Karen needed a bite to eat, but it was now well past 10pm and very little was open. There was a McDonalds just across the street from the hotel who’s drive-through window was still open. We ran through the drive-through and back to the hotel to eat, catch up, watch an episode of Game of Thrones, and… other things you don’t need to know about.

We had two days to get to the Par-Tay on the island. For tomorrow, we would cross the eastern Washington desert and venture into the mountains on the North Cascades Highway (WA20).