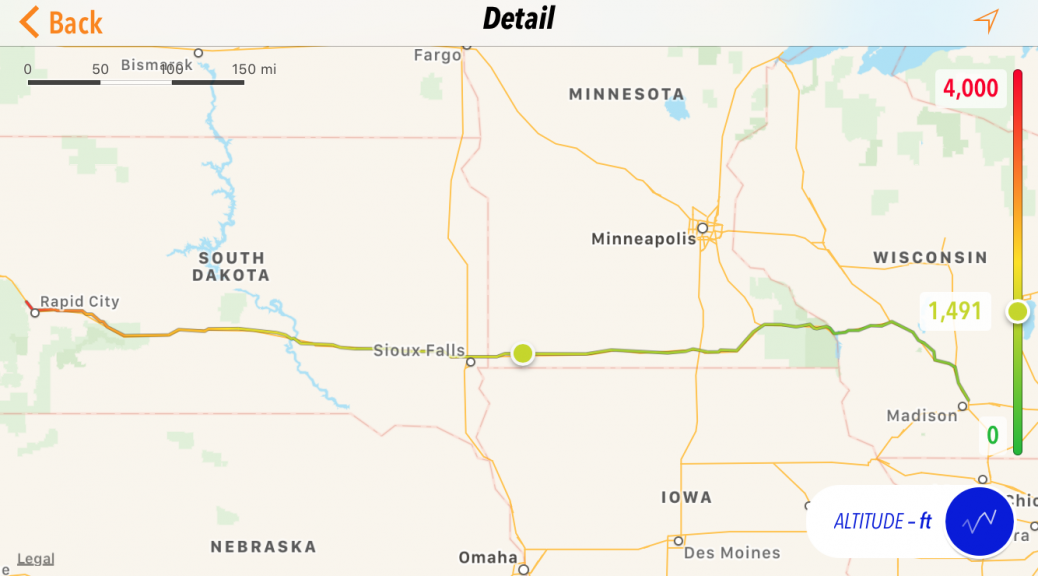 Rapid City, SD is over 700 miles away and I need to get there today. No problem, right?

Mileage, for bikers, is a relative thing. Actually, it's relative to several things:

Riding 700+ miles in a day isn't that big a deal on the Nightowl. Yes, it's a full day, but easily within the capabilities of the machine and this bike shouldn't beat you do death in the process. If you add all-day rain or boost my age to over 80 years, then it's much more impressive.

So, in a nutshell, this day should be a simple exercise in taking care of business.

Aside from the normal I90/I94 congestion around the tourist Mecca that is the Wisconsin Dells, the miles up to the Mississippi River passed without incident. The temperatures were cool, the sun was shining, and the fellow drivers were basically cooperative in letting me through.

There was plenty of small boat activity on the Mississippi River but nothing big (tugs and barges and such). I noticed that a few pleasure boats had ganged together to go through the lock just north of La Crosse. It made me wonder if the lock charges by the boat or by the instance. I'll have to look that one up.

After climbing out of the Mississippi River valley, the landscape in southern Minnesota flattens out a bit. As you continue west, it flattens out a lot. As I passed the Rochester exit, I waved in a generally northeast direction towards the abode of my friends Sparky and Pooder. I'd considered letting them know I was passing through, but I knew I really needed to crank miles and wouldn't have much time to visit anyway. Perhaps I'll catch them on the way home (hint, hint…).

As I approached Luverne, Minnesota and my gas tank approached empty, I became more and more interested in the dark clouds that dominated the horizon. I issued the voice command to pull up my live radar map and let out a sigh at what I saw. There were several spotty lines of rain making their way across my path. None of these system looked all that organized, so no big thunderheads or overly heavy rain, but there were definitely showers in my future.

I stopped for gas in Luverne and checked the weather situation more thoroughly. The heaviest rain that looked to be a threat was just about to cross I90 about 10 miles farther down the road. I was suddenly reminded of something the fair and wise Red once said, "Sometimes, it's best to pull the shoulder and wait a few minutes." In spite of my go-fever tendencies, her words actually sank in today and I elected to have a quick bite of road food before continuing down the road. Perhaps that one bad spot of rain would get the hell out of the way by the time I reached it.

With this day being the last Sunday of Sturgis Rally week, there are lots of bikers headed east. As a result, just about every gas/convenience store on the major roads were well picked over for food. This place didn't even have any hot dogs rotating on the dog heaters. Bummer. I needed a little protein, so I grabbed two Payday bars and a Diet Coke. Road food of champions.

Back on the road after my time-wasting snack, I spent half the time closely inspecting the rain clouds that now surrounded my and the other half wishing I had rinsed the peanuts to the Payday bars out of my teeth a little more thoroughly. It's hard to extract the remaining bits in a full face helmet with the cheek pads mashing the inside of your mouth against your teeth.

I had the stereo piping my iPhone music into my headset. Just as the drizzle started, I was listening to the opening strains of
Low Spark of High-Heeled Boys by Traffic. It seemed to strike a proper mood for the weather. The rain did get harder than a drizzle in a few places, but none of it was getting me very wet. In addition, I could occasionally see the lighter skies out the west side of this system. I began to hope that I was going to get through this without having to put on raingear. As long as I could keep moving at a decent rate of speed, the windshield, fairing, and lowers were protecting me well.

Then I hit the next construction zone.

There had been several of these starting at about Worthington. It was your typical crossover strategy where one set of lanes was closed and that traffics was diverted to the other side of the interstate, running two-way for a bit. Most of these zones weren't that long, so they hadn't impeded my progress much.

This time, I found myself in a line of frustrated cars stuck behind a weekend warrior in his motor home, delicately negotiating the single-lane road at a whopping 35 mph, 20 mph below the 55mph limit. Now robbed of the protection lent by my fairing/windshield, I was starting to get wet. I backed off from the car in front of me to reduce the road spray, but the rain itself was now hitting my pretty heavily.

Luckily, the heavy rain only lasted two miles, not even long enough for the runoff to soak the crotch of my pants. This was a blessing. Naturally, this construction zone was the longest of the bunch and we were stuck behind Mr. I-don't-know-how-to-drive-my-RV for another 12 miles. Then things looked up. The construction zone ended, the rain stopped completely, and we entered South Dakota.

It remained cloudy and would continue to shower lightly on me all the way to Mitchell, SD. Shortly after Mitchell, the last of the clouds were behind me and the sun came out. All told, the rain hadn't soaked completely through any of my gear, though my perforated gloved were pretty wet. I would spend the remainder of the trip putting my gloved hands in the slipstream off the fairing to help dry them out.

Running a good pace, even in South Dakota's 80 mph speed limits, I was consuming gas a little faster and needed to get some just before the exit to Pierre. The iExit app said there was gas in the tiny berg of Vivian, SD. There was, thankfully, since the miles-to-empty gauge was in the single digits when I pulled into the gas station.

The cloud cover west of Rapid City meant the sun was going to set a little early today. It was still plenty light but not anywhere near as light as it should have been for 7:30pm. I pulled into a gas station off one of the many Rapid City, SD exits and called my friend Chuck to let him know I was in town. He and his wife Barb had just sat down to dinner at a restaurant and, miracle of miracles, it was only about a mile from where I was.

So I had some good company for dinner.

We caught up, ate food, gabbed some more, and discussed the schedule for our friend Brad's funeral service the next day up at the Black Hills National Cemetery. Chuck suggested a hotel towards the cemetery, a relatively new place, and he and Barb could pick me up there tomorrow and ride together to the service.

With a plan in place, we parted ways in the restaurant parking lot. I ventured the remaining 10 miles up the road and stopped at the Ramada Inn in Summerset, SD. The good news was that they had a room available. The bad news was that the pool and (more importantly for me) the hot tub were both out of order. To ease the pain of this revelation, the pleasant woman at the counter informed me that the on-site bar would be open until 2am.

I moved into my room and gathered my iPad and keyboard and made my way back down to the bar. A pretty simple arrangement, the bar didn't have a permanent bartender, just one of the office staff spending most of his time in the adjoining room. I perused the rows of bottles behind the bar, lamented the lack of a bottle of Woodford, and requested a double Maker's Mark, neat.

It seemed a little strange that I had to explain to the bartender what neat meant; he understood immediately. He then proceeded to pick up what looked like a water glass and filled it 2/3rd's full with Maker's Mark. My first reaction was, "Jesus, I can't drink all that". Then I remembered that I was on vacation, with a noon checkout time the next day, so perhaps I could chance it.

I nursed my one drink for the next two hours as I caught up on trip reports, eventually retiring to my room at 1am. Instead of going to bed, I continued to write until 2am. Thank the gods I don't have to get up at the butt crack of dawn tomorrow.

After Brad's service, I will head west into Wyoming and hope to stay the night in Cody, WY. That would put me in a good position to ride the Chief Joseph Scenic Byway and Beartooth Pass early the next day.