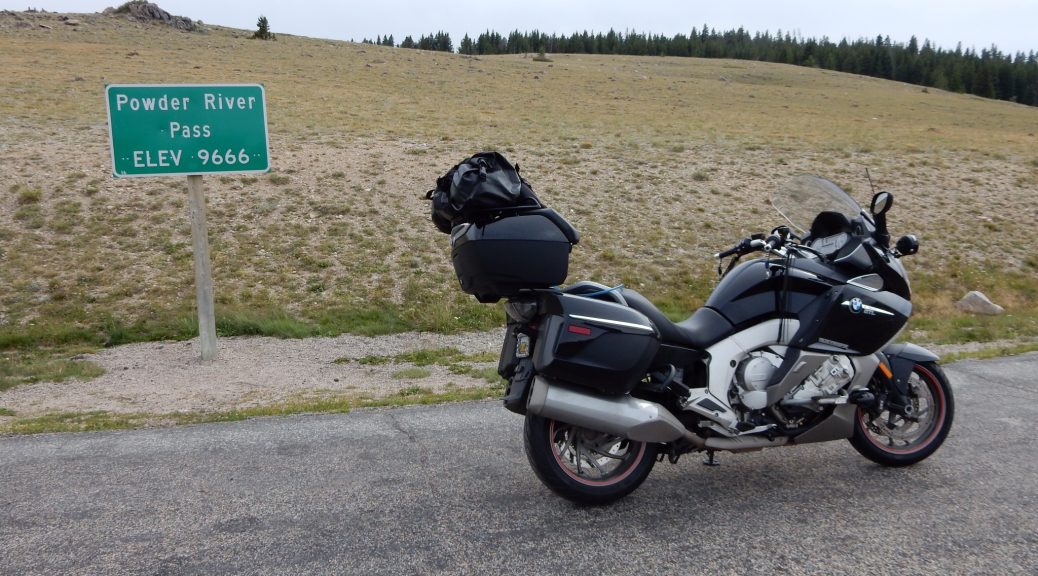 Today I would see a friend off and finally get to some real mountains on this trip.

Funeral for a Friend

I awoke with plenty of time to get down to the hotel common area for their breakfast. They had a waffle maker, which is nearly always a good thing, along with a couple other hot offerings: scrambled eggs and sausage patties. The rest of the breakfast was the standard stuff you see in dozens of chain hotels around the United States. I ate while catching up online and returned to my room to pack up.

Chuck and Barb planned to pick me up to take me to Brad’s military funeral service a bit after 11am. True to their word, they showed up on their BMWs just after I moved the Nightowl around to the front of the hotel (from the back parking lot where I could view it from my room). Barb’s sister was following along in a car. We had a nice day; sunny but not overly hot.

The ride from Summerset up to the Black Hills National Cemetery only took a few minutes. You can see the precisely laid out rows of head markers just west of I90 before you arrive at Sturgis. We parked in front of the main building and waited for the other attendees to arrive.

It was a small group but that was expected since there had already been other service(s) before this one. I was probably the most peripheral of the friends that had shown up, but I liked Brad and it didn’t take a big change to my plans to be in attendance.

We rode a processional a short distance to the location for the service, a nice building with an entire wall of windows facing the honor guard waiting outside with rifles in hand. The two officers met Brad’s son, accepted Brad’s ashes and his flag from him, and solemnly placed them on the bench in front of the set of chairs the the attendees.

Deacon Dave officiated the service, which was brief and to the point (a bit like Brad). Bob Maiwald, a former co-worker of Brad’s, also read a nice piece. Then the honor guard outside fired their salute and the officers inside folded the flag and presented it to Brad’s son. There’s something about this part of the ritual that always gets to me. Something about the careful folding of the flag, ending with a presentation to the next of kin with a few words offering condolences on behalf of a thankful country. It’s both prideful and poignant. I’m tearing up just writing about it.

With that, the service was complete and the attendees proceeded to offer each other words of support and many an embrace. We eventually made our way back the vehicles. Barb had arranged for a room at a restaurant back in Rapid City. I was tempted to join, but I needed to get down the road. I bid my goodbyes and rode with the others as far as the freeway. As they turned east towards Rapid City, I waved and turned west towards Sturgis and points farther west.

The Ride to the Mountains

I’ve ridden the stretch of I90 from the Black Hills west across Wyoming so many times that it seems like I’ve described it a dozen times. This ride, if anything, seemed a bit more peaceful than most. There was no strong wind blowing in my face to kill my gas mileage or blowing across my path to put me in the ditch. There was no oppressive heat encouraging me to tear off my leathers to keep from overheating. It was just a nice, fast, ride out of the green forested Black Hills and into the arid rolling landscapes of northwest Wyoming.

Note: That’s not really being fair to Wyoming. There are several stretches of forest along the few passes you go through on I90, but the rest of it is pretty barren. Not desert, more like a high plains steppe.

There’s a place a few miles east of Moorcroft where you can actually see Devil’s Tower from I90. By see I mean just barely. I usually miss this when heading west because you have to look back over your shoulder a bit to see it. I almost always notice it when coming from the west. Luckily, I caught it this time, and took a very anti-climactic photo of the view. 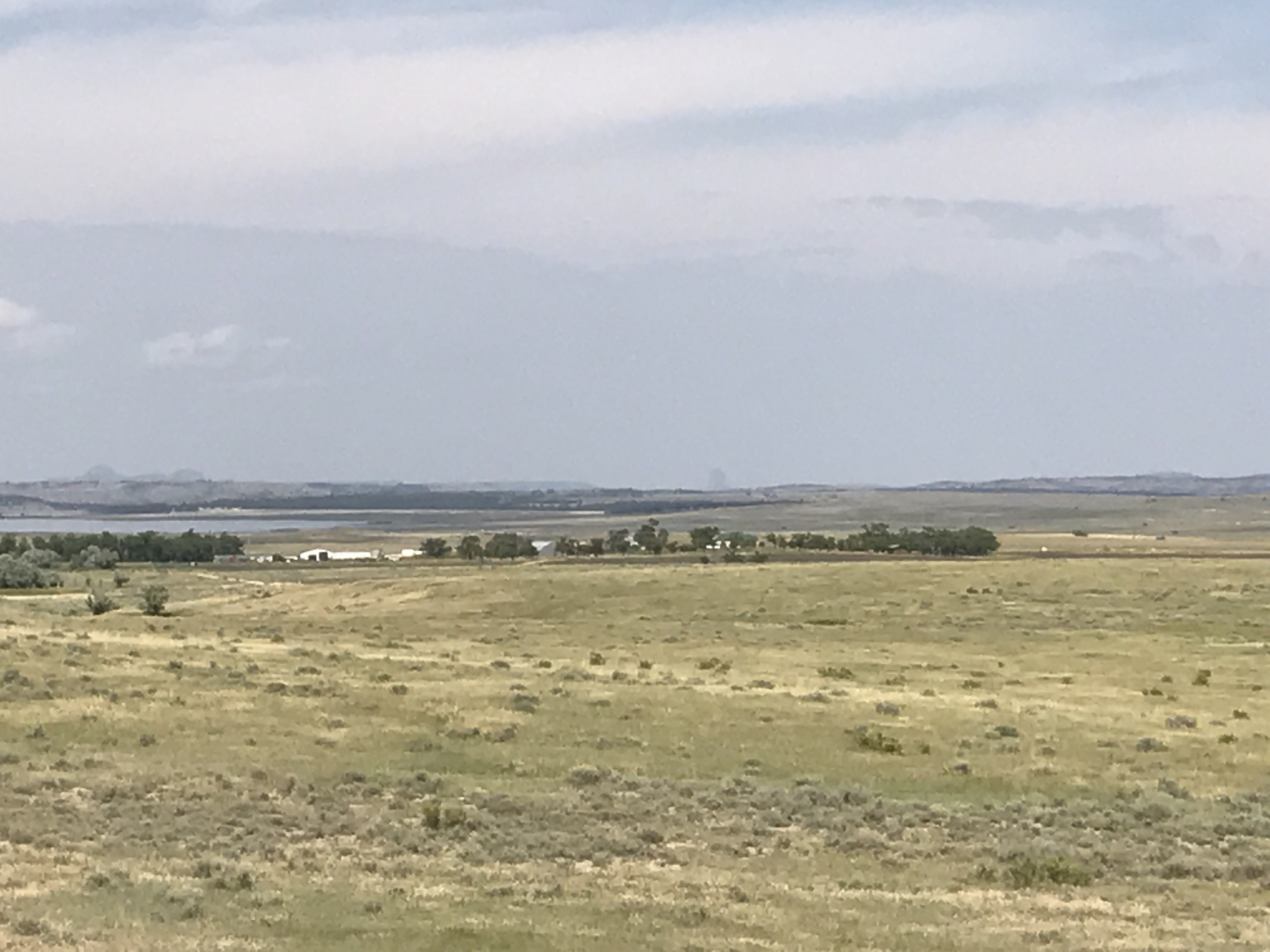 As I approached Buffalo, I had noted that the Bighorn Mountains that were starting to dominate the western horizon weren’t anywhere as clear as I’d remembered them. From a distance, I thought it was smoke from local wildfires. As I got closer, I realized that there was a band of rain forming along the eastern slope of the Bighorns. I was going to take a photo of it, but my camera’s battery had crapped out. Bummer.

This forced a minor re-think of the day. I needed to recharge some equipment (the iPhone was depleted too, I’m not sure why) and I also needed to wait a bit for the rain cell hovering over US16 just west of Buffalo to move along to the east. Consequently, even though I wasn’t starving, I stopped at a Pizza Hut for a personal pan pizza and an electrical outlet. The waitstaff dutifully showed me to the only table that had a convenient outlet next to it and I went around hooking up my gadgets while they fetched my a drink.

After lunch, I decided to gas up so I wouldn’t have to between here and the target destination of Cody, WY. I wanted to stay in Cody so I could do the Chief Joseph Scenic Byway and Beartooth Pass near the start of the next day.

With the rain out of the way, I made my way west on US16 up the Powder River Pass. The west side of this pass is more about sweeping corners through high-altitude forests. The west side of the pass ends up going down the side of a gorge before exiting onto the high plain just east of Ten Sleep, Wyoming. Apart from a few areas of we roads and a stray raindrop or two on my windshield, the delay tactic in Buffalo had paid off in spades and I had a fun ride over the pass.

I still can’t get over how well the Nightowl handles in the curves. It’s on another planet compared to the Cruiser. The Vector handles pretty damn well for a Harley, but it’s still too long and too heavy. The Nightowl is about the same weight as the Vector and certainly looks more massive, but there’s something about the suspension that makes it turn into corners with much more confidence. Add to this a wide and even power band that lets you maintain even engine braking in a given gear across a wide breadth of speed, and you have an excellent platform for spirited rides through mountain passes.

I looked for an old Sunrun haunt, the Flagstaff Cafe, during my ride through downtown Ten Sleep, but I couldn’t find it. Perhaps the building has been revamped into something else.

Just west of Ten Sleep, I turned north to take a road that would cut the diagonal and eliminate an otherwise boring ride into Worland. I eventually picked up US20 north towards Greybull. Rather than ride all the way to Greybull, I turned west on WY30 and cut this corner too. Much like the stretch of I90 through Wyoming, I’d ridden this stretch many times and was doing just about anything to vary the scenery.

I pulled into Cody and proceeded directly to the Ponderosa Campground on the west side of downtown. The Ponderosa isn’t the cheapest campground, $30 for a tent site, but I like their setting. Behind all the wide-open, near-treeless, parking areas for RVs, there’s a ravine down to a small fast-moving creek. The road down this ravine is steep and has four switchback curves, all right after one another. The road down the ravine is the only paved road on the entire campground, and rightly so since even most non-four-wheel-drive cars wouldn’t be able to negotiate it if it was gravel, much less a motorcycle.

Lucky for me, my preferred spot was not yet taken. I proceeded to exercise my tendency to be the enemy-of-the-people and rode the Nightowl right down the footpath to the lower tent sites on the creek. There, nestled in the trees along this rolling creek, I set up camp. The only downside to this location is that you have no cell signal down inside this hole; you have to walk/ride the hill to do anything online or make a call. Otherwise, I love it. 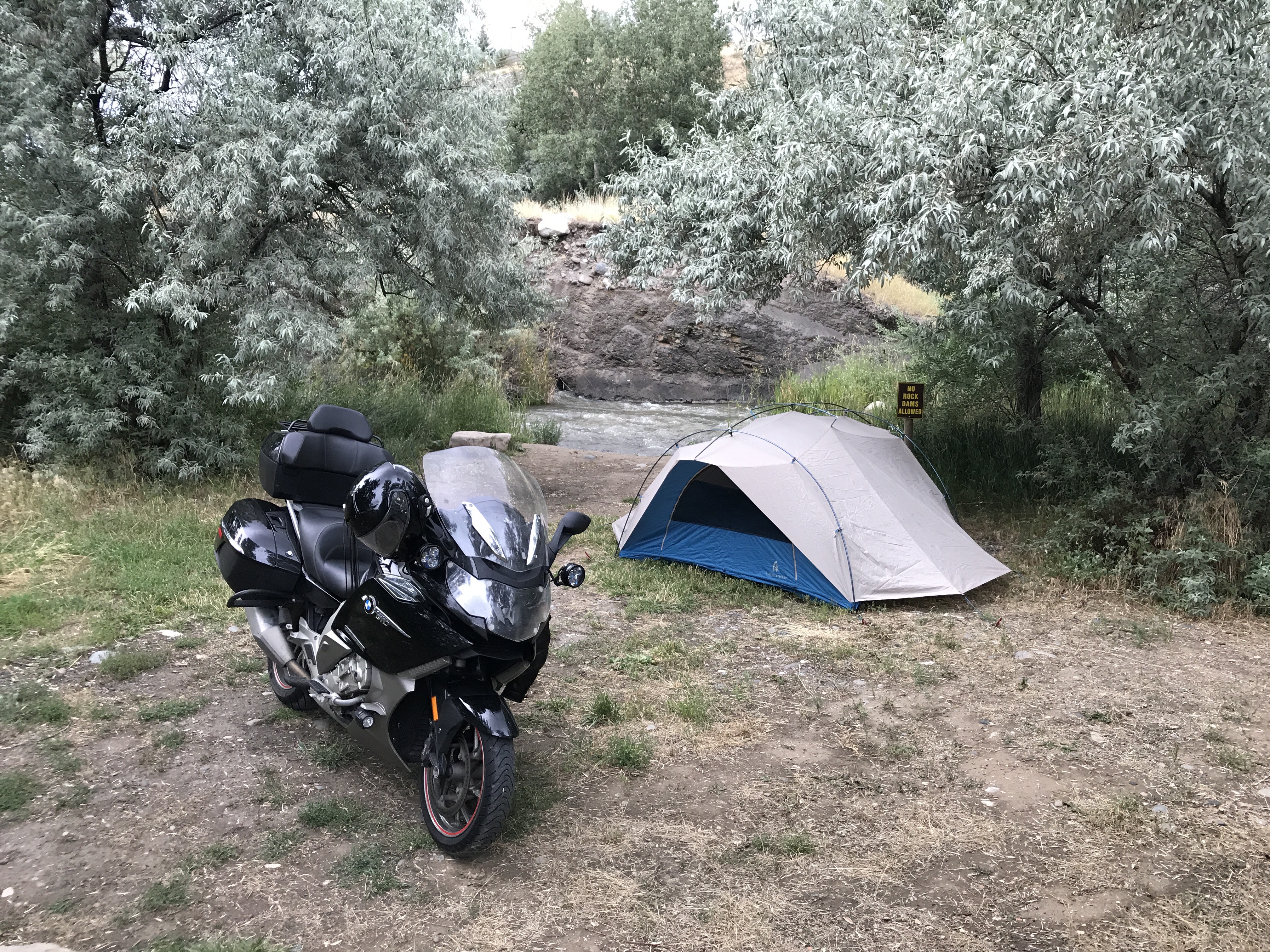 After moving in for the night, I packed my electronics and made my way back into town for a meal at Irma’s. They were sympathetic to my gadget needs and sat me at the end of the bar right next to an electrical outlet. I enjoyed a patty melt for dinner, bread pudding with whiskey sauce for dessert, and then nursed a double Bulliet Bourbon while I uploaded photos and wrote trip reports. The 10pm closing bell was approaching, so I packed up, rolled back to my secluded campsite and was soon asleep.

Get through the Chief Joseph Byway and Beartooth Pass. Then head west as far as I can get. If I can get all the way to Missoula, I could detour through Lolo Pass and still make it to Spokane in time to pick up Karen.