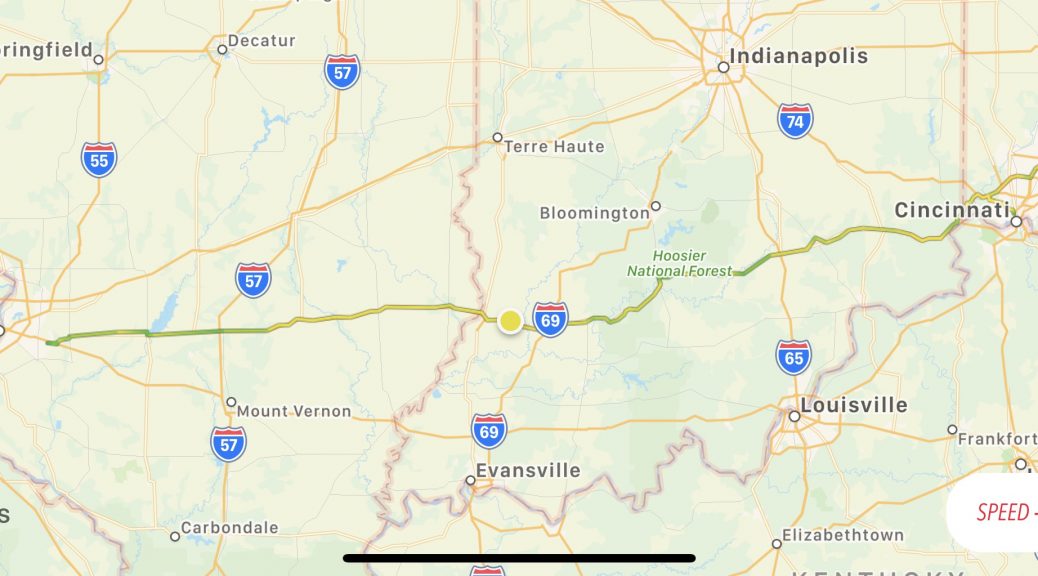 Today I meet up with US50 and point west across southern Indiana and Illinois.

The alarm went off way too soon, even though it was 9am. The late start the previous evening, coupled with the late-night troubleshooting of why yesterday’s post was unable to, well, post, all conspired to deprive me of much needed sleep.

I wandered down the to lobby to see if breakfast was still going on, but it ended at 9am.

Meh, I probably needed the sleep more than the calories.

I proceeded to load up the Nightowl in the cicada dead-or-dying zone that was the hotel parking lot. I don’t mind them so much. Yes, they’re creepy huge, but they don’t bite, they just make noise.

I had noticed the night before that both tires were running a couple of pounds low. Since I had a few more minutes of morning shade, I decided to rectify this before hitting the road. My Air Shot air pump did a good job of injecting a few pounds of air into both tires. Unfortunately, for small pressure changes, it takes a while for the Nightowl’s brain to show the updated PSI values in the dash display. While I was able to nail the target pressure dead-on for the rear tire, I first overshot in the front tire. I let out a little air, but it never registered. So I let out more, and more, and still a little more. By the time I finally registered, I was better than before, but still a little low. I decided I’d mess with it later, hitting the road just before 10am.

I’m not overly fond of driving through Cincinnati. It’s congested, not overly scenic (other than the riverfront itself), and it’s always under construction. My thought was that I’d avoid downtown entirely, skirt the suburbs on the I275 bypass, and pick up US50 on the west side of the metro mess.

Here’s where I engage in a battle of wills with the Waze AI. Waze is a group-sourced traffic and navigation app for smartphones. Basically, it relies on all of its users to enter where they slow down, where the hazards are, where the cops are, etc. Then all the users benefit from the cumulative information provided by the crowd. If you’re wanting to get to your destination by the fastest, most direct, route, Waze can be your best friend.

In my case, I’m wanting to use Waze for routing, traffic avoidance, and to know where the cops are. I do not, however, need it to get me there by the most expedient route. I’ll decide what roads I want to take, because I know which ones are the most scenic.

So, if you were to script Waze’s pleasant female voice (I call her the Waze Bitch) and my clever retorts, you’d have a conversation that goes something like the following:

This time, navigating around Cincinnati, I must confess that the Waze Bitch… was right. I thought she was sending me to Indianapolis for a nice boring ride down I70, which I did not want. So I ignored that turn figuring that I’d see the exit to US50 up ahead.

Instead, I started to see the Cincinnati downtown skyline.

An exit, U-turn, and a quick 8 mile trip back away from downtown Cincinnati got me back on track, but it was a bit embarrassing that Waze knew better than me… this time.

Soon enough, I’d exited the interstate and started west on US50.

US50 in the Midwestern US is predominantly a rural highway. If you start all the way back at the east coast, the only big metropolitan areas that it goes through are:

The rest of it is mostly connects small towns. Consequently, it has a different character. It’s mostly two-lane, though parts of it expand to four-lane. It tends to weave a bit more, having been laid down before civil engineers had all the earth-moving toys that allowed them to alter the landscape just to reduce the curvature of high-speed roads.

On the Interstate, you’re treated to large, often illuminated, billboards touting all the national franchises for food, auto parts, and the occasional tourist trap. On two-lane highways like US50, you don’t see as many billboard. You see a lot more hand-painted signs advertising everything from fresh eggs to sweet corn to pumpkin patches. Given the time of the year, I know it’s too early for the corn crop and it’s way too early for pumpkins to be ripe, so these signs are constants, left up all year because sometime they will be useful.

I was surprised at how rolling the landscape was in Indiana. It wasn’t as craggy or steep as the hill country in southern Ohio, but it still made for nice motorcycling. Nothing overly twisty, but lots of sweeping corners in and out of shallow river valleys or over rolling hills. The farms ran the full gamut: different crops, different livestock, sometimes orchards, and nearly always neatly kept. The farms were broken up with plenty of forested land and the occasional lake/reservoir.

One unfortunate factor reducing my enjoyment was the heat. Today was very warm (90ºs F / mid-30ºs C) with 85% humidity. These conditions, coupled with my resistance to taking off my protective leathers for any conditions, made me a fairly miserable boy.

One town that I knew of, but had never visited was Seymour, Indiana. The only reason I knew of it is from the singer/songwriter John Cougar Mellencamp. Seymour is his home town and, presumably, the subject of one of his hits Small Town. I suspect that Seymour has grown a bit since Mellencamp grew up there. It’s not New York City, but it’s no longer podunk either.

The Nightowl started to complain about it’s waning fuel reserves around lunch time, so I started to scope out dining opportunities. I stopped for gas in Bedford, Indiana but the convenience store there didn’t look like it offered much beyond bags of chips, so I ventured onward. I could by some road food and eat in the parking lot, but there wasn’t any shade to stand under and my time in the heat meant I needed a sit-down meal in an air conditioned restaurant.

I found a Mexican restaurant and decided to eat there. My waiter spotted my leathers and immediately sympathized. When I asked for ice water, lots of ice water, he took the request to heart and brought a huge glass mug of ice water to the table.

After my waiter brought my food, we chatted a bit about riding in this kind of heat. It turns out he rides too and is planning a trip to the Sturgis Rally in South Dakota later this year. I gave him a few suggestions for things to do and wished him luck.

The rest of Indiana west of Bedford started to flatten out a bit. There was less and less forests and more farmland. The highlight was coming across a Chevrolet Corvette club out for a group ride (see video below).

What can I say? Illinois is boring.

This far south, it’s almost all cleared farmland. The gently rolling hills from Indiana were long gone. There’s something to be said for long-distance vistas reaching out to the horizon, but after a while, it becomes redundant.

The temperatures were now around 97ºF / 36º C and my leathers weren’t getting any cooler. I’d nearly finished off all the water that I carry on the bike. I didn’t need fuel yet, but I was going to stop anyway for some refreshment and some time standing in the shade.

I found what I was looking for in Salem, Illinois. There was a MotoMart gas station and convenience store with a tall line of nice bushy trees lining it’s western border, throwing blessed shade over the establishment and it’s parking lot. I pulled in, peeled off my jacket and helmet, and went inside to choose my indulgences.

The PowerAde would replace many of the electrolytes that I was sweating into my leathers. The strawberry shortcake ice cream treat… was cold. Right now, anything cold is good.

Another benefit of this stop was that hey had an actual air hose for filling tires. I’m not talking about one of those portable coin-operated compressors jiggering another dollar out of your pocket just for some compressed air. This one was free; that’s a rare site these days. I took advantage of this virtual unicorn of generosity and correct the slightly low pressure in the front tire left over from this morning. When both tires read in the dash at 42 PSI, Ghost is a happy guy.

Finally, I scoped out another hotel room for the night. I was getting close to the St. Louis metro mess and really didn’t want to ride through it’s concrete slab heat sink after it absorbed sunshine all afternoon. I decided to stay the night just east of St. Louis and tackle it in the morning before it becomes too oppressive. A nice little Super 8 in O’Fallon, Illinois did the trick. When I arrived, I though I’d struck the jackpot when I saw a swimming pool in the courtyard, but it was empty and being repaired.

After rewriting yesterday’s post that had been unceremoniously zapped into the ether by the WordPress app for iPad, I ventured out for dinner and found sustenance at the Horseshoe restaurant and bar. The buffalo chicken sandwich was tasty.

While editing this post, I suddenly couldn’t communicate with my site. It seems that someone on the hotel WiFi was trying to hijack communication to the site using an oddball certificate. Probably some bored seven-year-old who’s bored and pissed off because the hotel pool is broken.

You guessed it… more westbound US50. This time crossing Missouri and into (gulp) Kansas.