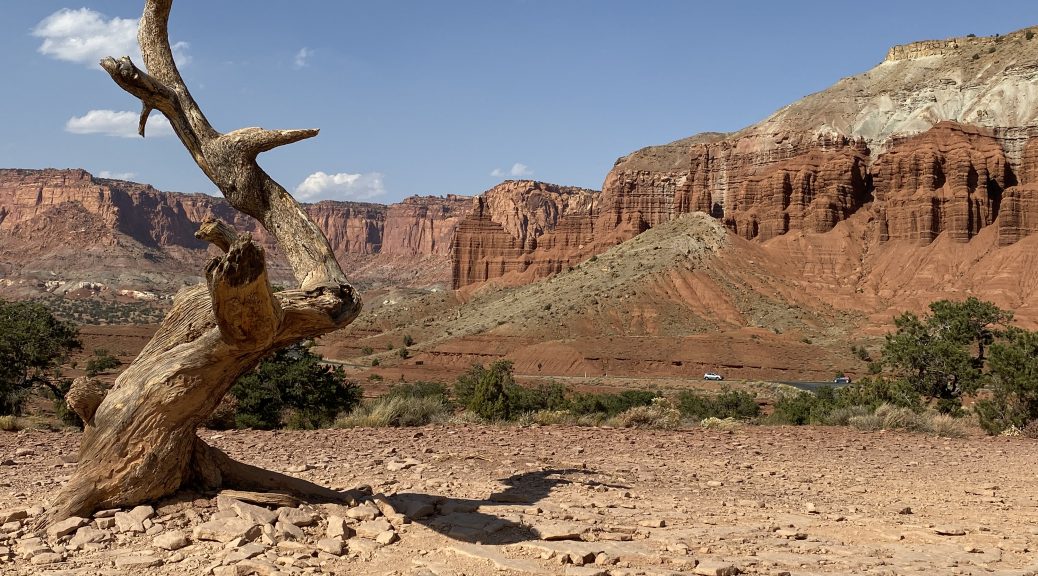 One rider departs and the other two ride one of Ghost’s favorite routes across Utah.

So far group has been three: Ghost and the Fountain brothers, Pete and John. John decided that he really wanted to visit a long-time friend in Reno and our route wouldn’t get him close to Reno for a few more days. Consequently, John decided to break off from the group and ride directly to Reno. He got an early departure to make as much time as possible.

That leaves Ghost and Pete.

Since our NAS hotel didn’t offer breakfast, we’d changed our normal 9am departure to not include breakfast. (This was not a problem since the miles to cover this day weren’t as bad as yesterday.) We would be ready to head to breakfast and fuel at 9am.

As fate would have it, 9am arrived and both Ghost and Pete had errands to run. So we split up to run our errands and fuel up our respective bikes, after which we would meet at the breakfast establishment: R-F (whatever that stands for).

With breakfast secure in our stomachs, we jumped on the bikes and headed south towards Blanding.

The ride down US191 to Blanding is usually an easy 20 mile jaunt. Today it had extra obstacles. Not one, or two, or three, but four (count them, four!) single lane construction zones with stop lights protecting their borders. All of them were drainage replacement projects. Two of them simply rerouted all the traffic into a common lane and made each direction take their turn. The other two had set up a single temporary lane that went down into the ditch and back up onto the roadway on the other side of the culvert/bridge that was being worked on. Woo hoo, a special torture! Truth be told, these temporary lanes weren’t too bad though they would both have been easier with a Jeep or other four-wheel drive vehicle. We were already anxious about our late start, so these added delays weren’t making us happy.

We continued to a point a few miles south of Blanding where Utah Highway 95 heads off to the west. Within the scope of my Netscum friends, Red was the first one to ride this road and write favorably about it. Then Red told Madman about it. He took a trip on it and agreed that it was one righteous road. I rode it first in 1999 and have ridden it several times since. It’s easily my favorite route (albeit not the fastest) across Utah.

The scenery starts with the rolling rocky terrain and sage and scrub pine so common in Utah. Things start to get interesting when you approach a large never ending ridge that looks with the world’s widest jump ramp. Surely, the road can’t go up that! It doesn’t. Instead there’s a huge thin man-made cut through the ridge that the road passes through before descending down the other side into a shallow canyon and climbing the other side.

A bit further on, you pass the entrance for Natural Bridges National Monument. We didn’t stop there today, but I’ve been there before and it’s worth a visit.

Shortly thereafter, you meet up with Utah Highway 261 south, which (if you’re interested) takes you to a unpaved switch-back filled climb (or descent, depending on direction) known as the Moki Dugway. It’s worth noting that both UT95 and UT261 appeared to be getting new asphalt. Another reason to get out here.

West of the UT261 junction, the scenery along UT95 gets much redder and a lot more impressive. Mesas and hoodoos and canyons galore and the road seems to eschew a straight line in favor of following the baselines of these rock formations. It is, in a word, spectacular.

Eventually, the road starts a steady downhill and you can see a large arch bridge in the distance. This is the cross in of the Colorado River at Glen Canyon. In all, you cross two major bridges: one over the Colorado River itself and another over the Dust Devil wash. Now on the west bank of the Colorado, the road climbs through a deep cut. Just before you reach the top, there’s a little road heading off to the left (assuming westbound) with a sign: “Hite Overlook”. If you do not immediately turn on this road, you are an idiot. The Hite Overlook positions you at the edge of a cliff overlooking a gentle curve in the Colorado. From the overlook you can see the community of Hite across the river, along with the huge boat launch that used to be the center of activity in this desolate region. That, however, was back in the 20th century, before the reservoir level dropped and the boat launch became unusable.

We took our fair share of photos at the Overlook. We also backtracked a bit to pay a visit to the facilities at the new boat launch. Ironically, the new boat launch is located in a region that used to be under water. You can still see the dried grey pieces of driftwood gathered on the rocks about 20 feet above the current parking lot.

Panorama of Colorado River from the Hite Overlook.

Pete and the bikes at the Hite Overlook.

Colorado River panorama at Glen Canyon.
Leaving Glen Canyon, you start west up a side canyon until that canyon narrows down to almost nothing. Then you pop out onto the plateau, with higher mountains off to the west and nothing but sage plains in the foreground. This scenery stays the same as you head north towards Hanksville, but interesting rock formations begin to appear on the horizon to the west, foreshadowing our trip through Capitol Reef.

The Ride Through Capitol Reef

After a gas stop in Hanksville, we turned west on Utah Highway 24 towards Capitol Reef National Park. At first, the rock formations are far from the road and a bit drab. Simple gray mesas with varying degrees of interesting erosion pattern on their edges. Further west, the tops of these formations start to turn yellow. Then the entire formations are yellow. Pass through a canyon and suddenly everything is in muted shades of red and orange with sharp geometric patterns, as if they were assembled by a giant lego set. Through another canyon and the colors change to solid peachy shades, with the geometric shapes replaced by smooth rounded shapes like giant ice cream sundaes. Then you pass through yet another canyon and you pop out the other side in a Kodachrome paradise of deep red formations in columned walls and lone spires.

Unable to resist any longer, we pulled into a Panoramic Overlook lot and took a bunch of photos.

Capitol Reef from Panorama Point.
Just west of the Panoramic Overlook is Chimney Rock, the most photographed feature of Capitol Reef. Naturally, we didn’t stop for a dedicated photo of this feature, though you can see it in the background of a few of the photos above.

West of Chimney Rock, the red-rock show disappears and you enter the town of Torrey, Utah. But we had miles to cover and a mountain pass to cross, so we turned south on Utah Highway 12.

The Ride to Escalante

Heading south on UT12 from Torrey, you start with a climb. You need to climb a mountain pass to get to the Grand Staircase and other features around Escalante.

The pass was significantly colder than the ride through Capitol Reef and I found myself wishing I’d put my heated jacket liner back on.

The treat of the pass was the foliage. Several regions on this mountain are completely covered with Aspen trees and their golden fall color was in full display. Add the strong gusting winds and you had a ride through a golden ticker-tape parade… with sweepers and twisties thrown in at no extra charge.

Down the south side of the pass you reach the canyons and chaotic rock formations of the Grand Staircase. The colors of these formations aren’t as vibrant as in Capitol Reef, but they’re still spectacular.

One idiosyncrasy of this road is that it traverses a ridge between two canyons, almost until the ridge disappears. For the last half-mile of this stretch, you literally have a canyon immediately off the shoulder of each side of the road. We stopped to take a few photos of this phenomena.

Bikes at UT12 ridge.
Once the ridge ends, the road dives down into the confluence of canyons, at a 14% grade, no less. After winding through the canyon for a few miles, you crawl back out of it through a series of switchbacks, eventually dumping out back out on the surrounding plateau.

The End of the Ride

After a gas stop at Escalante, we had a mere 65 miles to get to our chosen hotel in Panguitch, Utah. Unfortunately, fate threw a wrench in the works. There was an accident and a combination of county sheriffs and state troopers had UT12 closed in both directions. We couldn’t see the accident site itself; we could only see the movements of the emergency vehicles. We shut off the bikes and Pete cranked up some music as we gazed off in the distance and tried to guess how long our delay was going to be based on the movements of law enforcement officers and their vehicles.

In all, we lost about 20 minutes before they allowed the southbound traffic to pass through a single lane of traffic. As we passed, we saw a smallish sedan in the ditch almost completely surrounded by the shredded remnants of some recreational vehicle, probably a small Class A motor home. A nasty mess indeed.

The rest of the ride was largely uneventful, aside from the big drop in temperature when we crested the plateau around the entrance to Bryce Canyon National Park. Continuing west, we hoped that the temperatures would climb back up a bit with the descent down Red Canyon, but no. Luckily, we had a mere 10 miles to go to get to Panguitch and our (hopefully) warm hotel room.

After checking in, we walked over to the Cowboy’s Smokehouse for dinner. The ribs were a dry rub with Mesquite smoke and were very meaty and filling. Neither of us really needed to finish the ribs but we tried anyway.

The wind was still blowing strong for the walk back to the hotel, dropping the 41ºF temp (probably) down towards freezing. Good thing it was a short walk.

Tomorrow is a big day, not in length, but in complexity. We spend most of the day exploring the area and then riding down to Las Vegas to meet up with Tud and Ange, who are flying in from Nova Scotia and renting a bike. Then we all ride west through Death Valley before stopping for the night. What could go wrong?