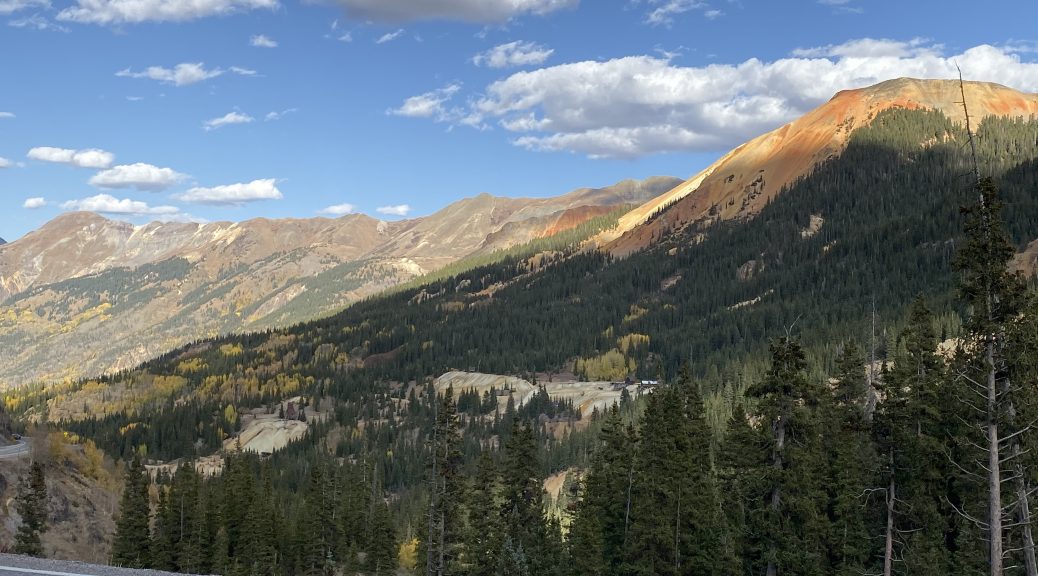 With the Great Plains behind us, today was 484 miles of majestic Colorado scenery, fall colors, mountain passes, and not quite enough daylight.

We start the day at the hotel on the western side of the Denver metroplex. Since it worked so well the previous day, we agreed to be ready to hit the road at 9am. Since the hotel had breakfast, this meant eating before the departure deadline. 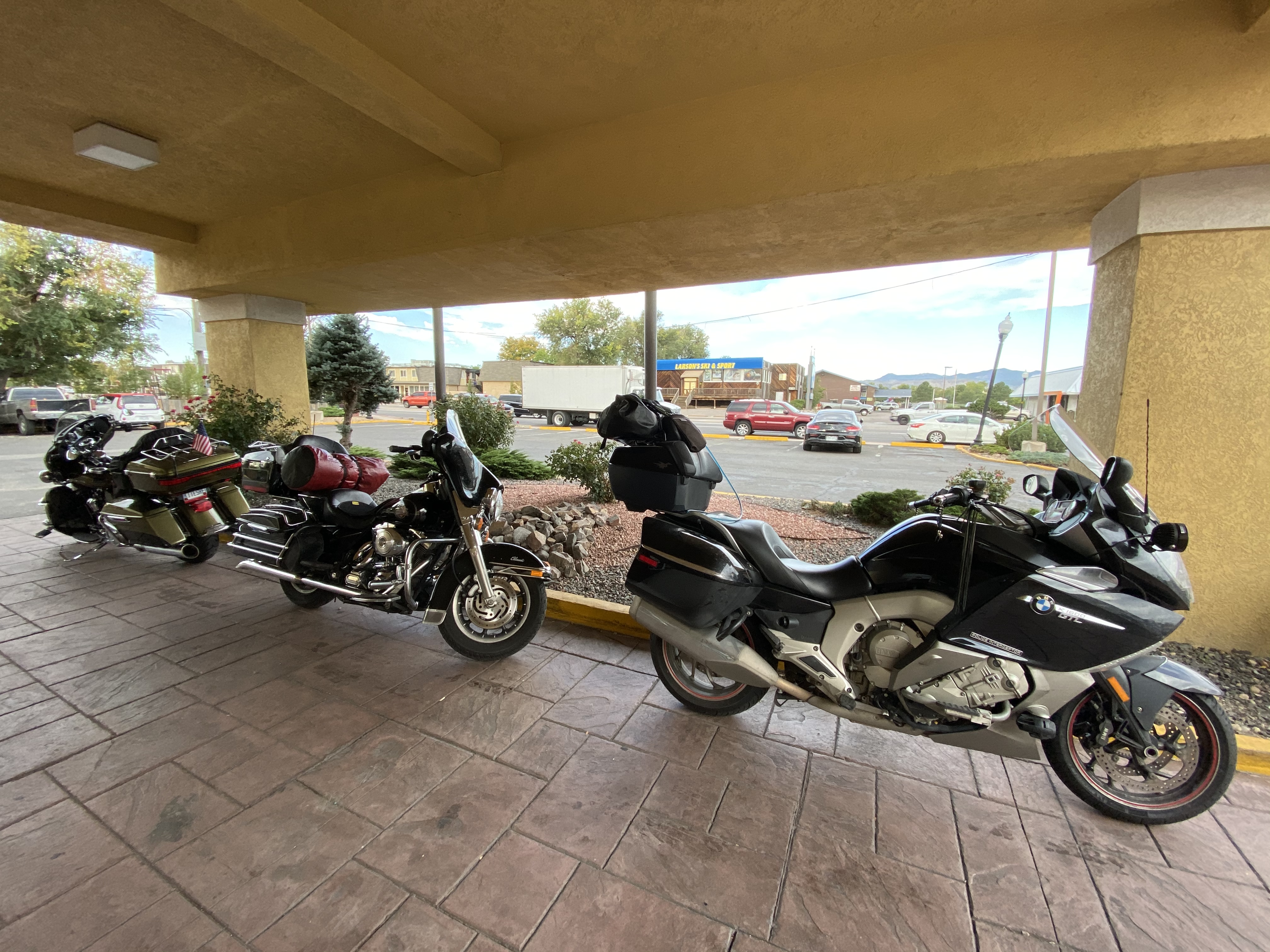 Once again, we all managed to get our ducks in a row with bikes packed, breakfast ingested, and gear on at the prescribed time. Official departure time: 9:03am. After a stop at a nearby gas station, we hit I70 west out of the city.

The Ride to Leadville

The traffic out of Denver wasn’t too bad, with only one instance where we were grabbing the brakes for a slow-down. Soon enough, we were climbing the slope into the Rockies. While it had been sunny and warm down in the city, we knew that it was going to get colder as we gained altitude.

The western climb out of Denver is especially fun for me. There’s something about the long uphill climb on a stretch of three-lane freeway, dodging traffic to maintain a good pace. <shrug> It’s just a hell of a lot of fun. Pete and John did a good job of keeping up as I threaded our way though the uphill traffic.

We made good time, enjoying the mountain vistas and winding highway, until we got close to the Eisenhower Tunnel. One of the two lanes through the tunnel was closed for a repair crew, so we lost about 20 minutes in uphill stop-and-go traffic.

Through the tunnel, we had a good decent to Dillon, where we stopped to take a photo or two of the view of the mountains over the reservoir.

A view across the Dillon Reservoir towards Frisco, Colorado.

The group at the Dillon Reservoir overlook.

We exited at Colorado Highway 92 and ventured into the mountains and up to Leadville. We stopped downtown for a moment to take a few photos of the picturesque Main Street.

The bikes on Main Street in Leadville, Colorado.

We also stopped at a convenience store with a restroom. While waiting in the parking lot, I noticed that a pothole in the concrete had water in it and it was frozen. The pothole was still in the morning shade, so it was still ice. Winter is coming.

The Ride to Gunnison

Heading south out of Leadville on US24 (Telegraph Road to SE Michigan folks), we rode in the valley just east of a line of 14,000ft (4250m) peaks. The wind in the valley picked up a bit, blowing from the west over the peaks and gusting enough to adjust our lines as we traveled down the highway.

We made a gas stop in Buena Vista, where US24 heads back east and we pick up US285 south. The peaks to the west of us in this region are called the Collegiate Peaks and have names like Mount Harvard and Mount Yale.

As we approached our turn west on US50, we noticed a fair amount of smoke rising from the mountain range south of our turn. Looks like there are ongoing wild fire efforts in central Colorado.

The turn west on US50 leads us up Monarch Pass, home to a ski resort. We took advantage of the curvy road and allowed ourselves some spirited riding. The scenery was in full fall splendor, with the yellow of the Aspen trees contrasting the green of the pines. It seemed like the Aspens were changing colors on their own schedules. We saw the bright primary yellows of peak color, the dim green of late summer, and the orange-brown of post-peak-color. Several of the Aspen groves were shedding their leaves, showering us in leaves as we flew by.

We stopped for a few photos at the top of Monarch Pass and continued west to Gunnison. We stopped there for gas, and took a quick break while Ghost called his bank:

The Ride to Ridgeway

West of Gunnison, US50 follows the shore of the Blue Mesa Reservoir beneath the cliff sides of tall mesas to the north. It’s an impressive site, though we were a bit focused on getting down the road and did not stop for photos.

After crossing to the south side of the reservoir, the road climbs a few low passes that include judicious amounts of fun curvy roads.

Finally, we descended into Montrose, where we turned south on US550 towards Ridgeway, which would be a decision point for us.

From Ridgeway, we had two options:

We chose the US550 route, which I have traveled several times, but never on a sunny day.

If you haven’t ridden this road, add it to your bucket list. Heading south (like we did today) you enter the little town off Ouray. The town itself isn’t very exciting. The set of hairpin curves that climb the mountain as you exit town to the south are very exciting.

After the hairpins, you traverse the eastern cliff of a deep gorge with lots of curves, narrow lanes, and no guardrails. Take it from a guy that has ridden off a mountain (me), you don’t want to ride off of this one.

Further south, you climb your way up a wide valley with the eastern mountains looking like they’re rusting. There was a lot of mining in this area and the ores in these mountains were vividly obvious in the late afternoon sun.

We stopped for photos at a few points, as Ghost struggled to get the best angle to capture the dramatic colors of the rusting mountains and the fall foliage.

The Nightowl at a US550 overlook.

A distorted panorama on the road Climbing Red Mountain Pass on US550.

The group at a US550 overlook.

After the Red Mountain Pass (just over 11,000 feet or 3,350m), we descended into the bowl that hosts the mining town of Silverton. Knowing that we were pressed for time, or in this case, daylight, we continued south without a visit.

A panoramic view from US550.

Descending Coal Bank Pass to the south, US550 winds it’s way down to Durango. By this time, the sun was low in the sky but still providing direct sunlight in higher elevations.

Stopping for gas, we decided to go ahead and press on for another 100 miles to get to Monticello, Utah.

West of Durango, we didn’t see much more direct sunlight. It was always behind one or more of the low mountain ridges that we were crossing. By the time we rode down the slope into Mancos, the sun was below the horizon for good, though the clear skies shed plenty of twilight.

Turning north out of Mancos, we cut the corner to US491. The roads were in good shape, but the temperatures dropped rapidly with the setting of the sun. There weren’t too many vehicles on the roads but we still needed to make several passes to maintain a healthy pace. One idiosyncrasy of this stretch of roads was the length off the passing lanes: they were too damn short. You see the upcoming passing lane and think, I should probably pass that guy in front of me… oh, too late, it’s already gone.

One byproduct of riding into the desert night is that distances in the dark become distorted. We could see the lights of Monticello in the distance, but they were still almost 30 miles away. They look soooo close, but no.

My Trails app that gives us such nice maps of the day’s route jumped off a cliff today, crashing after just an hour of riding time. Luckily, I have my “Where is Ghost” map as a backup. 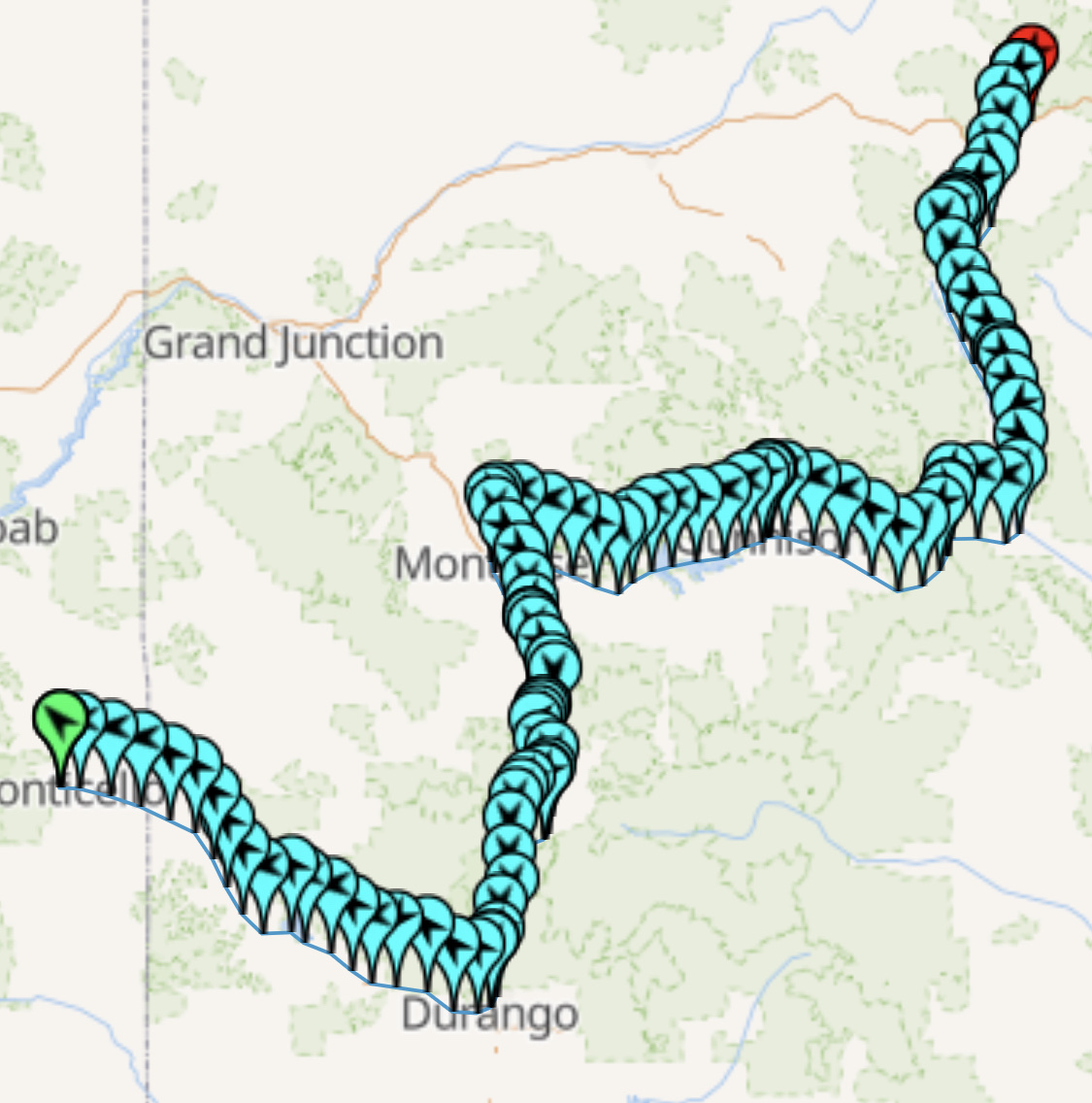 We checked into our NAS hotel for the evening and discovered that there was at least one establishment that still feeds people after 8pm on a weeknight. The Grainery came to our rescue and served us adult beverages and good food. It turns out they may be the best option in town for breakfast tomorrow morning.

We make one of my favorite crossings of Utah: Glen Canyon, Capitol Reef, and Escalante.