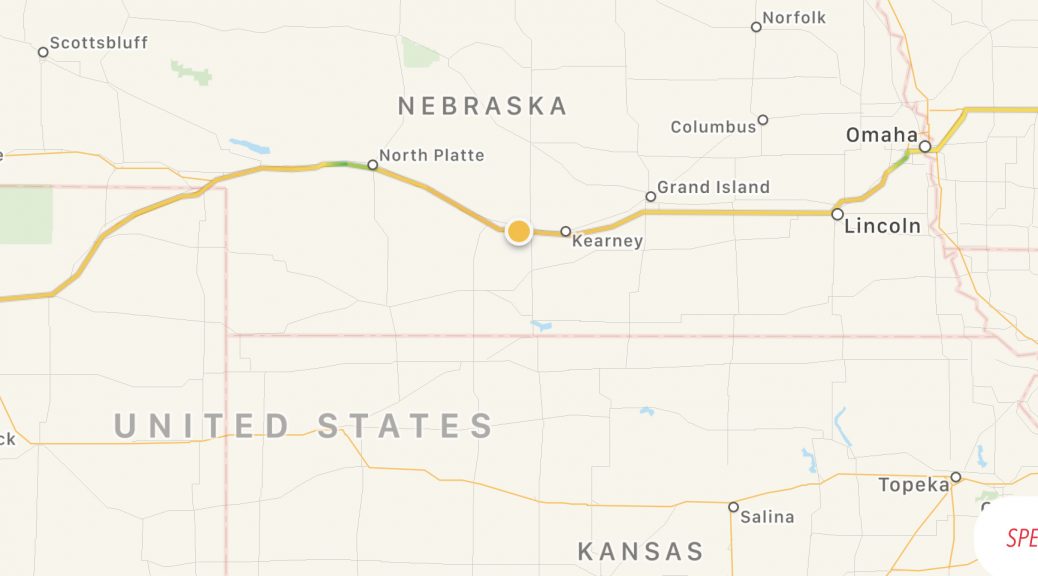 Another slab-blast day across the plains on the way to the Party In The Saloon (PITS) in California.

The day begins in the town of Clive, IA, which is a western suburb of the capital city of Des Moines, UT. As we grabbed a quick bite of breakfast at the hotel, the sun was already shining. That did not, however, automatically mean it was warm. The clear skies the evening before had made for a crisp evening and a chilly morning. By the time we were mounting the bikes and heading out the parking lot at 9am, the temperature has just climbed over 50ºF (10ºC). Naturally, we were properly layered up and our heated gear was on and engaged.

We had no problem getting gassed up and on the highway, immediately turning west on I80 towards western Iowa.

We made good time west on I80 over the rolling farmlands of Iowa. This late in the season, there were only a few fields that haven’t been harvested yet. We did see some late harvest activity; bailing of hay and thrashing of the remnants of this years already harvested corn stalks.

Western Iowa has a lot of wind farming and all of the lazily spinning turbines were pointed in our direction, indicating a slight headwind that was cutting into our fuel mileage.

Our decent pace of travel was reduced a bit as we neared Council Bluffs, IA. An Iowa state trooper that had been running interference for a road crew entered traffic just in front of us. I’ve passed several cops over the years, but only when they were rolling at or just over the posted speed limit. This trooper was headed west at about 8 mph over the limit. This is a little slower that we were trying to travel, but passing him at that speed is just asking for a citation. So we accepted our fate and slowed down until the trooper exited near Council Bluffs.

For those who ride through Omaha and Council Bluffs, I can report that the express lanes in downtown Council Bluffs are finally done. This huge construction zone has been active for years. No reason to avoid it now; it’s done.

John wanted to get a new balaclava, and noted that there was a Cabela’s along our planned route. I did a quick search and found a Cabelas in Omaha. This didn’t happen to be the Cabela’s that John had found (that one was further down the road, probably in Kearney), but it was still a Cabela’s, so we found him a neck gaiter.

Pete’s five-gallon tank (on Agua’s old bagger) continues to be the bane of our existence, sending us to gas stations every ~130-150 miles (210-240km). (Ok, I’m mostly joking.) Actually, it’s not that bad, especially in chilly weather where you want a quick break to rekindle some body heat every so often.

During the course of the day, the temperature rose into the upper 70sF. This necessitated a shedding of layers for all of us. I started the day with the following thermal layers: long-john bottoms and socks along with my heated jacket liner and gloves. By the end of the day, the only thermal gear left was my gloves, albeit not plugged in.

The headwind that had dogged us most of the day became a crosswind between Kearney and the Colorado border, making all of us lean a little left (south) to maintain a straight course. We noted that most tractor trailers had their trailer angled to the right by the crosswind.

We did have one adventure with Pete’s tank when he reported going on reserve just west of Sterling along I76 in northeastern Colorado. Having been through here before, I knew that there’s a hot lot of nuthin’ between Sterling and Brush, a good 16 miles (26km) down the highway. Pete said at the beginning of the journey that he could go “at least 15 miles” on reserve. I guess we’ll test that theory. Apparently, Pete got a bit nervous as we continued westward with no gas stations in sight, but we pulled into a station in Brush before he got stranded. Pete proceeded to fill his 5 gallon tank with 5.08 gallons of gas. Now that’s efficient use of all of your available range.

One interesting side note about crossing Nebraska: as you travel west, it seems as flat as a pancake, but it’s really a loooong uphill trek. Here’s the day’s altitude track.

The sun was setting behind the distant silhouette of mountains as we entered the eastern suburbs of Denver. There was a lot of low haze hanging over the landscape. It could be humidity or dust or smoke; we’re not sure which, though we couldn’t smell any smoke. It made for a lot of late day glare as we entered the city.

I’d suggested a Super 8 hotel towards the west side of Denver that I’d stayed at before for two main reasons:

The hotel clerk checked us in and offered for us to park in the covered office entrance area before we asked about it (that’s worth points).

I dashed off to a nearby CVS pharmacy to refill a prescription that I’d foolishly left back home (what an idiot!). This CVS happened to be in a Target store, but not just any Target store: a SuperTarget. This means it has the in-house pharmacy and a full grocery store.

Consequently, while waiting for my prescription to get filled, I wander the food aisles… on an empty stomach. Nearly everything I saw seemed like a good candidate for munchies back at the hotel room. The following item seemed especially tempting. 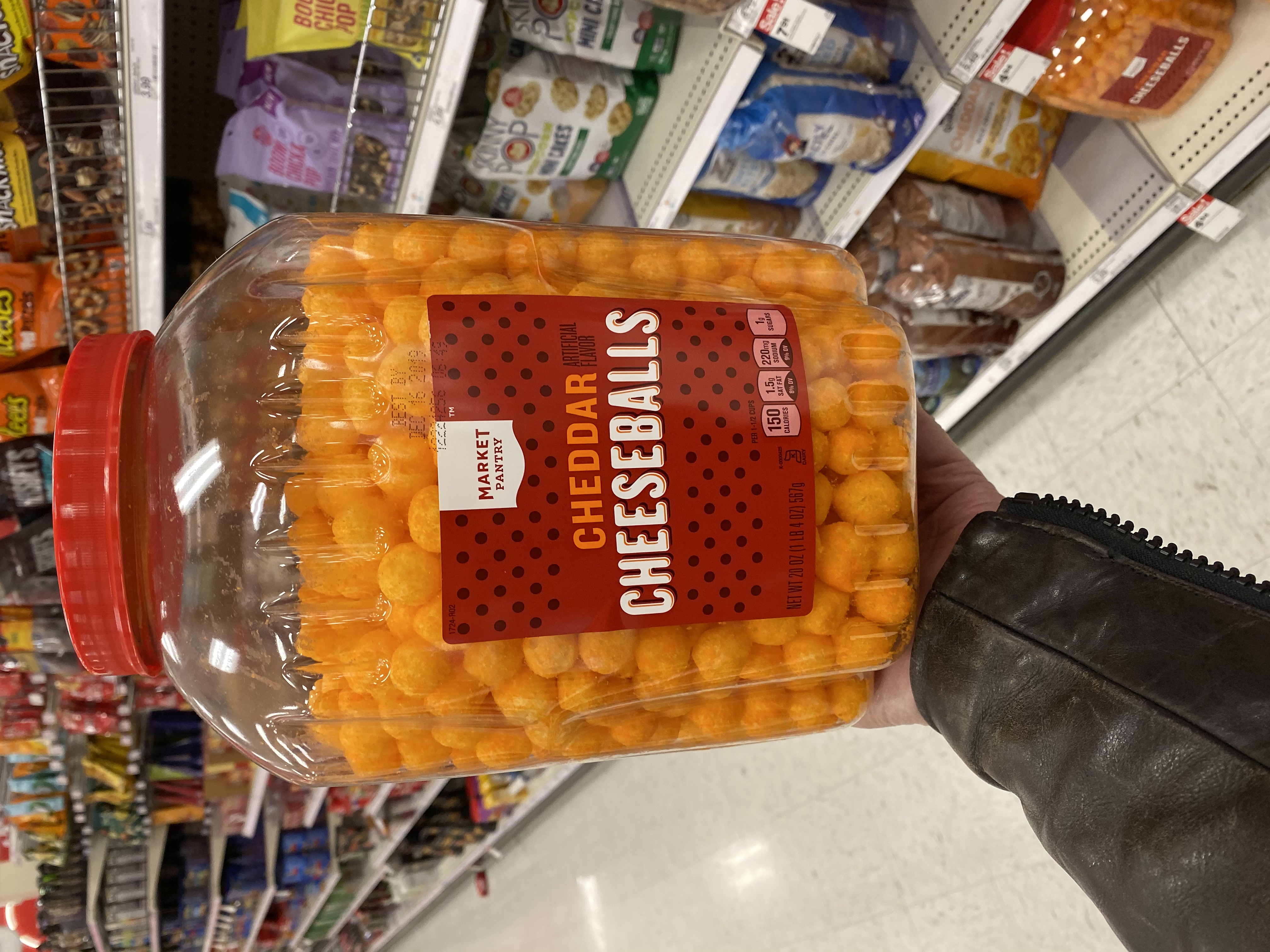 After my pharmacy errand, we walked across the parking lot to 3 Agave’s restaurant. Beer and margaritas were consumed. Fajitas and burritos were savored. With full bellies and 663 miles (1067km) behind us, it was time to get some rest.

We’ll take a meandering path across Colorado; mostly two-lane roads and several mountain passes. With luck, we’ll get just across the Utah border.