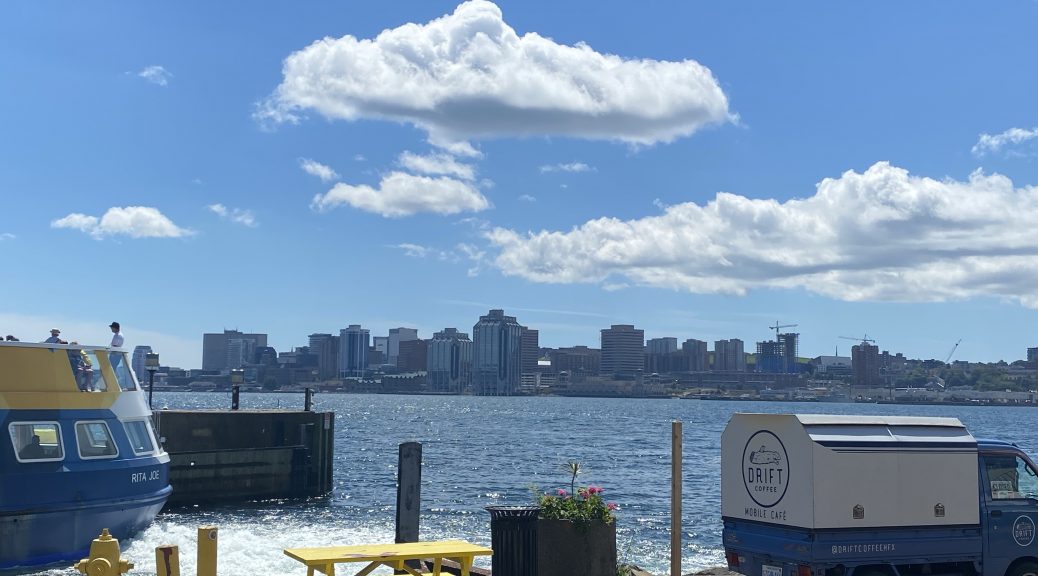 We’re not traveling today, but we can still ride into nearby Halifax for lunch and a museum visit.

Our hosts had to work today, so Chuck and I were on our own to explore the area. As mentioned yesterday, Chuck had discovered that The Canteen restaurant down towards Halifax (actually across the bay in Dartmouth) had a menu item called the Cropster, which was a lobster roll, but with crab mixed into it as well. We’d also been recommended to visit the Maritime Museum of the Atlantic.

Having the day off from our normal travels, we took our time getting moving, eventually leaving our hosts home about noon.

The ride down into the Halifax metropolitan area was only about 20 minutes long. The area around Halifax is well forested, so you don’t see the city proper until you’re almost on top of it. Navigating the winding roads and stoplights to get to our target restaurant took some additional time but we found The Canteen and managed to find a parking spot on the street about a block away.

As we’re removing gear and stowing it on the bikes, Chuck casually says, “I hope they’re not closed on Mondays.” It was as if these words were uttered by the Imp of Doom. I pulled out the phone, checked the hours for The Canteen, and they were indeed closed on Mondays. I tried to search for the term Crobster to see if this was something offered anywhere else in Halifax, but most of the search results concerned The Canteen; apparently, the Crobster was their own creation. On the second page of search results, however, I found a review of The Five Best Lobster Rolls in Halifax. The Crobster was on this list, but so was a place called Evan’s Fresh Seafood, and it was only a 900 ft (300 m) walk away.

I was looking for the restaurant, but we couldn’t find it because it was nestled inside a ferry terminal (there’s a passenger ferry that crosses from Dartmouth to Halifax). We ordered lobster rolls, and took seats on the shady patio overlooking the bay.

The lobster roll was quite good.

After lunch, we rode over the bridge across the bay and drove through downtown Halifax to visit the Maritime Museum of the Atlantic. The museum covered a the history of shipping in Halifax (and the northern Atlantic, in general). There was a lot of information on sailing ships, through the transition to steam, and eventually propeller-driven shipping that we know today.

The Museum also had sections that covered two important events: the sinking of the Titanic and the munitions ship explosion that destroyed much of Halifax back in 1917.

Regarding the Titanic, a lot of you may already know that the survivors, picked up by the liner Carpathia, were taken to New York. What you may not know is that transatlantic cable maintenance ships from Halifax were dispatched to the wreck site to pick up the bodies. Halifax has Titanic fatalities buried in three different cemeteries in the region.

Regarding the Halifax Explosion, the most impressive display (for me) was a collection of bits and pieces of the munitions ship, Mont Blanc, that exploded with a map showing where each piece was found relative to the actual explosion site. One piece, a 100 kg piece of steel that supported the top of the rudder, was found 2 two miles away. Imagine the necessary force to, not only wrench this fixture off the ship, but to hurl it two miles away. That’s bloody scary.

Another poignant story regarding the explosion was about a very common injury suffered during this catastrophe. You see, the Halifax Explosion didn’t happen in an instant. First, there was a collision of two ships. Shortly thereafter, a fire started on the munitions ship Mont Blanc that was damaged in the collision. The Mont Blanc had time to drift all the way to shore before the fire, started by broken benzene drums on the open deck, finally ignited the munitions in the cargo holds. In other words, there was time for thousands of locals to notice the fire and stop what they were doing to watch it. As a result, nearly 600 of the Halifax Explosion survivors had injuries to one or both of their eyes and almost half of them need to have at least one eye removed.

Finished with our museum visit, we noted that it was getting close to the evening commute time, so we decided to make a hasty retreat for our hosts’ domicile. It wasn’t quite 5pm yet, so the meat of the evening commute had yet to start. In spite of this fact, the congestion level was already pretty high and it took us a while to get out of downtown Halifax. Once were were on the highway’s leading out of down, out progress was better and, after a quick gas stop, we were back at our home for the night.

Our hostess prepared a wonderful dinner for us and we ate (probably) more than we should have.

Here’s a map of today’s short ride, with an altitude overlay.

We’re sticking around for another day, so we’ll spend the time touring around with our hosts and seeing some of the other sights in the area.