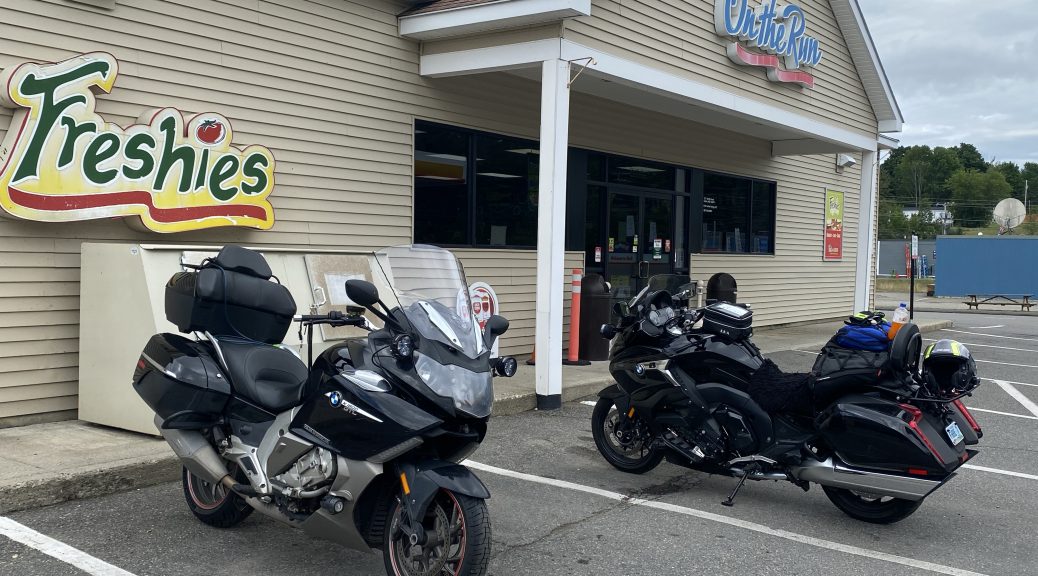 We had almost 500 miles and a border crossing between us and a few days staying with friends in Nova Scotia. Can we make it?

We had originally allotted three travel days to get from Michigan to Nova Scotia. Two days in, we had almost maintained the distance to break the trip into equal pieces. We had ~495 miles to cover and we didn’t know what the roads across the border in Canada would be like.

We decided to get across the border and to Moncton, New Brunswick and make a judgement call on whether to press on or to rest in Moncton and join our friends in Nova Scotia around lunch the next day.

The alarm went off at 7:30am and we gathered ourselves pretty quickly. Neither of us were interested in breakfast; no big surprise given the Chinese food feast we had the previous night. We had another beautiful day, though it was a bit cool. There was rain further out along our path, starting at Bangor, Maine and heavier areas east of the Canadian border. Those rain cells looked like they were dissipating and moving away from us; perhaps we’d get lucky and the rain would move out ahead of us.

We rolled out of the hotel lot at 8:34am (are you reading this, Fins?). We topped off the tanks on the bikes and started up I95. The pace on the ride was good and we made decent time, which was important today.

Heading down the road, I couldn’t help but notice that Maine looked a lot like northern Michigan. Lots of rolling forested landscape broken by river valleys and occasional wetlands. That impression would eventually get lost in a few details, like a pickup truck filled with buoyed fish netting, or the old English names for the places we passed, like: Norridgewock, Hampden Highlands, or Sebasticook.

As we approached Bangor, Maine, were we’d exit I95, I couldn’t get an old song our my head. Here are some of the lyrics:

…
Third boxcar, midnight train
Destination, Bangor, Maine
Old, worn out suit and shoes
I don’t pay no union dues
…
I’m a man of means by no means
King of the Road

King of the Road by Roger Miller

We departed I95 and rode through Bangor and out the east side of town on State Highway 9, which would take us to the Canadian border at Calais/St. Stephen. Initially, the speed limits on this highway were 40 mph and I was seriously chomping at the bit; we needed to make time today. Eventually, two things happened:

With our bird-dog in place (for both cops and critters), we were able to speed up a bit and make better time.

The border crossing at Calais was seriously uneventful. Chuck and I both got through in about five minutes. The only delay was Chuck having to explain to the pretty border attendant where South Dakota was.

Leaving the border station, we left the remote two-lane of Highway 9 and joined the four-lane, limited access, New Brunswick highway 1, which was basically like one of our US interstate highways. The road was in good shape and sparsely populated with vehicles; our pace improved.

The aforementioned weather cooperated by getting out of our way, until we reached Moncton, New Brunswick. Here, the cloud cover got lower and darker and a light mist began to fall. We stopped for gas and made our judgment call that we would be able to make it to our friends place in Nova Scotia before dark (and the roads turned into a Zoological park).

At the gas stop, we encountered a dude from Nova Scotia on an chopped knucklehead. He was headed home and was anxious to get out in front of the rain. We left about the same time and waved him through to get past us as a stoplight. Once out on the highway, he flogged that knuckle hard, doing at least 80 mph (130 kph) and slowly pulling away from us.

The rest of the trip down to Nova Scotia was in and out of misty rain, none of it heavy enough to warrant rain gear. The winds along the isthmus between the Bay of Fundy and Northumberland Strait were a bit gusty, but only lasted a few miles.

We turned south on the 102 at Truro and as only on that highway a few miles before it was time to cut west on a series of back roads that would take us to our hosts. A mile or two before our final turn south, I noticed that we’d picked up another bike behind Chuck. He disappeared just short of that turn to the south. About a mile later, he magically re-appeared in front of us, having cut the corner on a dirt road. It was our host Tud, rolling out the welcome wagon and (apparently) making sure we wouldn’t get lost on the way to his house.

Being a local, he was familiar with every curve of these roads in his back yard, so the pace picked up… dramatically. It was fun to rail around a few corners to end the ride (see the video at the end of this post).

We rolled in to Tud’s garage and his wife Ange was there to meet us at their gorgeous place on a lake. Dinner fixings were already making the kitchen smell like BBQ heaven. Needless to say, kick-back mode engaged pretty quickly. Having not eaten all day, Chuck and I ate like pigs.

Our host for the evening, Tud, decided to meet us along the way and led us home. This was captured by the dash cam.

Here was the day’s route, with an altitude overlay. Note the one high spot in Nova Scotia. You actually pay a toll to cross that “pass”. <shrug> Ok, I guess.

Relax. We’re here for two more nights. We’ll probably take a short ride down to Halifax, Nova Scotia to do some touristy stuff and get a crobster sandwich.