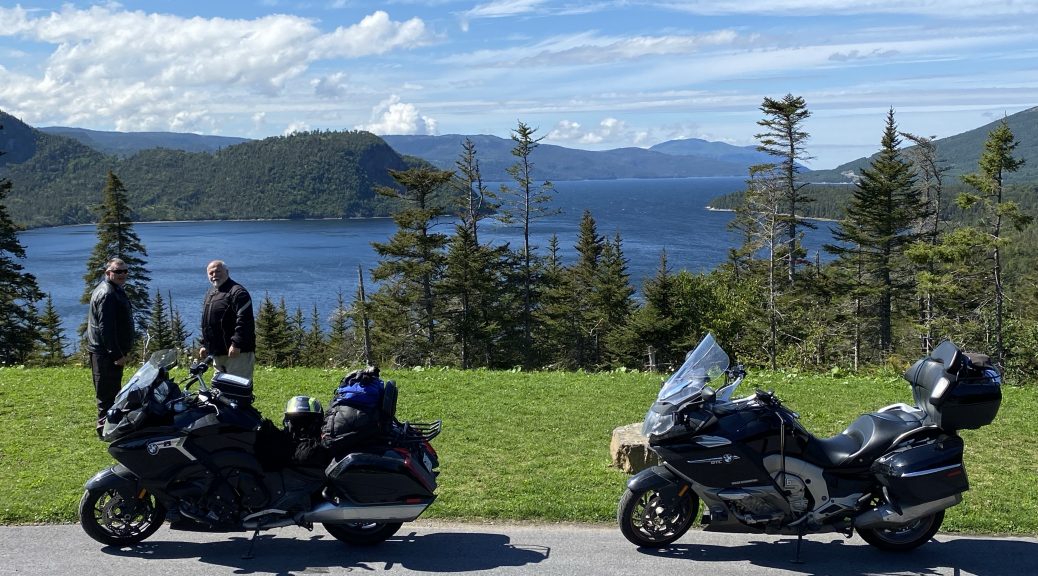 We travel down the Viking Trail that we traveled up two days ago, but this time we have a gorgeous sunny day.

We woke up late, starting to move around a little after 9am. The good news is that we only had a little over 200 miles to go today, and we were retracing a route that we’d already traveled.

While I took a shower, Chuck checkeds for any stored error codes on his bike. There were a few stored codes, but nothing to raise the eyebrows.

We loaded the bikes, and went across the street to gas up the bikes. This gas station was very busy; everybody and their brother was filling their tanks. To add to the challenge, most of the pumps only offered basic unleaded; our bikes preferred mid range or premium. The final delay was that none of the pumps had a card reader; everybody had to pay inside.

At the start of the day’s ride, the weather was dry, but mostly cloudy. You could see a tantalizing band of lighter sky to the south, but we weren’t there yet. The temperatures were still a little below 60ºF, so both of us were wearing an extra layer under our jackets.

As we traveled south, the Long Range mountains to the west become more prominent, giving us mountains to the left and coastline to the right. The cloud cover began to dissipate, allowing more sunshine and warmth to reach us.

After not seeing a moose for the entire time on Newfoundland, we finally saw two moose today. Ghost saw a large cow cross the road a good ways in front of the bikes (Unfortunately, too far away to be picked up on the dash cam). Chuck saw another cow moose on the far side of a lake near the road, but probably too far away to get a good photo with the limited zoom capabilities of our iPhones.

I elected to make an impromptu stop as we passed Arches Provincial Park. I’d skipped it on the way north two days ago because we had sketchy weather that day. During the stop, we met a guy on a red Yamaha Royal Star. He was out for a nice long day ride.

When we got to the larger Long Range mountains in Gros Morne National Park, we had much better conditions than two days ago, so we stopped for a better photo.

Just before we got back to Rocky Harbour, where we stayed a few nights ago, I made another impromptu stop at Lobster Cove so we could look around and take photos of its lighthouse. The better weather today made this a moral imperative.

We stopped at a convenience store in Rocky Harbour to get drinks and a snack. We chatted with a dude on a pretty blue/white Japanese cruiser (didn’t get the actual model). We also had a longer conversation with two bicycle riders who were out for a long (and hilly) ride on their carbon-fiber road bikes.

After the stop, we had a very fun ride through the Long Range mountains. Unlike our ride in the opposite direction a few days ago, we had very little traffic this time and no wet road conditions. I’ll grab some of this footage for today’s highlight video.

During our crossing of the Long Range mountains, we stopped at a scenic overlook for photos of the East Arm of Bonne Bay.

We made one last stop at the east end of the mountains for a quick photo of an overlook into a valley.

After that, the mountains were behind us and it was an easy ride the rest of the way to Deer Lake, where we turned south on TC1 (Trans Canada 1) towards our destination for the day: Corner Brook.

After the remoteness of the western coastal roads, the TC1 felt a bit congested. The good news is that it has plenty of four-lane sections and passing lanes, so making progress through the extra traffic is pretty easy.

After a couple of construction zones, which seemed to “end” three times before continuing unexpectedly, we rolled into Corner Brook. Our hotel for the night was easy to find, high on a hill overlooking the surrounding town and inlet.

After we checked in to a secondary room (our original room had a dead door key reader), we walked down to the gas station/convenience store just downhill from the hotel to stock up on evening drinks and snacks. Unfortunately, that place was really a gas station only, so we walked another couple of blocks to get to a proper convenience store. I guess that was our aerobic workout of the day.

We elected to eat dinner at the hotel restaurant, which had an excellent view of the surrounding town and inlet.

The fish chowder was pretty good. My shrimp fettuccine alfredo was ok, but Chuck’s fish on his fish & chips was overcooked, though the fries were fine.

After dinner it was back to the room to work on trip reports.

I added two little videos for today. The first one is shot from from the Nightowl facing forward.

The second one shows Chuck from the rear camera.

Here’s the link to the interactive map for today’s route.

For our last full day on The Rock, we ride down the remaining coast to Channel Port aux Basque and spend the night before jumping on the ferry back to Nova Scotia the following morning. Unfortunately, the forecast is for all day rain; it seems our fantastic standing with the Newfoundland weather gods has been rescinded.