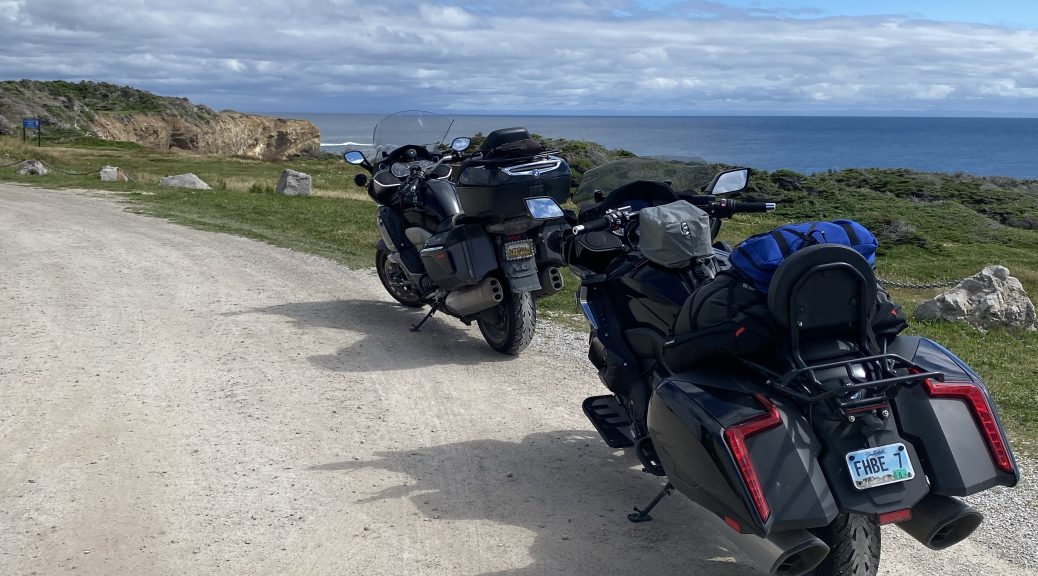 Our last full day of riding on Newfoundland, with a forecast for rain, and a go/no-go decision on the last really scenic peninsula before we board the ferry tomorrow.

By the time we started waking up, the rain outside had just stopped. It was moving slowly off to the east, but not fast enough that our departure wouldn’t ride into it. Consequently, we got creative on how to waste time before setting off on our last full day of riding in Newfoundland.

If the rain loitered later into the day, we’d probably skip the last peninsula loop that we’d tentatively planned for the day. The Port au Port peninsula is supposed to be fairly spectacular, but it involves a lot of riding on slower roads and you have to retrace your steps for quite a distance. All in all, it would add about 100 miles to the absolutely required minimum ride length of ~138 miles.

We managed to spend some time checking email and social media. I took a shower, even though I didn’t really need it. Chuck suggested that we depart from our usual wait to eat until lunch and indulge in breakfast at the hotel restaurant. <shrug> What the hell.

After breakfast, we finally got around to riding the bikes around to the back door of our room (facing a sketchy parking area, so we didn’t leave the bikes here overnight). We loaded up as the wind howled up the hill overlooking Corner Brook.

We pulled out of the hotel parking lot, gassed up the bikes, and were on the road at about 11:20am.

The good news is that our lazy morning was already paying dividends. The last of the nasty rain clouds had departed for points to the east, and we were beginning to see breaks of actual blue sky.

Out on TC1 (Trans Canada 1), the traffic was light (it’s Saturday) and the pace was brisk. It was a hilly area and most of the higher hills (or low mountains; pick your preference) had dark clouds over them as the passing airmass was dumping it’s rain on the higher elevations. As long as the TC1 stayed in the lower valleys to the west of these hills, we remained dry.

The go/no-go decision was based on a few factors:

After about 20 miles of riding down to Stephenville, we reached the decision intersection. A quick glance communicated that conditions looked good, so let’s do it. It’s either this or kill the extra time in a hotel room or pub at our destination.

We made our way west out of Stephenville, along a shoreline to our south. The dramatic cliffs along this shoreline meant the road ran about 100 feet above the ocean, with waves pounding the cliff sides. The further we went out on the peninsula, the better the weather conditions got. When we passed over the narrow causeway to the large end to the peninsula, we were getting patches of direct sun shine.

We rode around the Port au Port peninsula counter-clockwise, which meant we were always on the outside of the road with respect to the coastline. This gave us unobstructed views of the different formations along the shore.

By the time we reached Lourdes, the road turned southwest towards Cape St. George, which was the western tip of the peninsula. Here the elevation of the inland highlands got higher and the cliffs down the ocean got steeper. When we reached the village of Mainland, we stopped briefly for a photo or two.

After riding up and over an escarpment, we slowly descended to Cape St. George. As we entered the small village there, we noticed a motorcycle coming off a side road with rider and passenger. That side road had a hand painted sign on it in French with an arrow pointing (by my rough translation) to a park at the point. We abruptly turned down this road, which promptly turned to gravel, but did indeed lead to a park with a nice overlook of Cape St. George. Photo taking ensued.

After another 14 miles of dramatic shoreline, we returned to the narrow causeway that we’d taken earlier. We traversed that to get back to the mainland and continued on into Stephenville. Now it was about time to stop for a beverage and perhaps a snack, but there were no convenience stores to be found. We turned down the road back to TC1 to the south, but there weren’t any convenience stores there either.

That road ended and dumped us back on the TC1. Frustrated, I took the next exit, no matter where it led. This one happened to lead to the village of St. George, on the south side of the St. George Bay, across from the Cape of St. George that we’d visited about 90 minutes earlier.

Aside: The folks around here could have been a little more original in their naming of local features.

I simply couldn’t believe that the good people of St. George would tolerate living in a community that had no store from which to fuel their vehicles and buy important items like soft drinks and Twinkies. Lucky for us, they did have a convenience store, and we didn’t even have to ask anybody where it was.

We purchase our necessary drinks/snacks and go about munching them while standing around the bikes. While we’re there, the neighbor to the convenience store fires up his quad-runner ATV and rides by us to a nearby gravel parking lot and proceeds to do a few donuts on two wheels before returning to his driveway. I commented that this guy must be fun to watch on the local trails. A few minutes later, he ride’s a different four-person ATV over to the store and stops to talk on his way inside.

It turns out this this gentleman, Dave, is the owner of the local Bombadier ATV dealership and also rides motorcycles. He’d been curious about a BMW K1600 as a replacement for his current Gold Wing, so he had questions for us. We had a very nice chat before he departed to enter the store… which we also owns. If we ever return to Newfoundland, we make have to pay Dave a visit.

While we were chatting with Dave, more rain clouds had entered the area. We were now in a region on additional highlands, so there were more places up on mountainsides where rain was actively falling. You could still see the sunshine and blue skies off in the distance, but it could get pretty dark locally. During this stretch, we entered rain showers twice, and the second instance was less of a mist and more of a proper rain… but it only lasted for a minute and it stopped. We endured a little road spray over the next few miles, but that was it for the day’s rain.

We had the misfortune of riding up on a paving crew just before 5pm. This means that they were in the process of quitting for the day and getting their lumbering paving equipment off the road… while we were forced to wait. Lucky for us, none of that spotty rain was over us during this wait, which ended up lasting 15 minutes. The flag woman finally flashed the SLOW sign, and we were allowed to pass.

Now down on the far southwest portion of Newfoundland, we continued to ride past gorgeous highlands. We were getting pretty close to our destination of Port aux Basque, so there wasn’t much ride left in the day. I wanted to stop for a photo, but there were no good places to pull off. Fate stepped in and stopped us at a stoplight at a one lane bridge. This stoplight had a visible 90 second countdown, and I used this time to take a single photo of a, unfortunately, less spectacular portion of the highlands.

Soon thereafter, we arrived in Port aux Basque. The day’s ride was only 242 miles long, but we’d passed some excellent scenery. The miracle of the day was that, given the very rainy forecast at the start of the day, we’d spent a grand total of about 10 minutes of mostly light showers. Not bad at all.

We checked in and immediately walked across the street to secure drinks and Tim Hortons pastries for the evening. Then it was time for dinner at the hotel restaurant. We both tried the moose soup. Yes, you read that right. Moose soup. The actual moose meat in the soup was quite good, but the broth/soup is was served in wasn’t much to write home about. Dinner as a whole was deemed OK, but not up to par with some of our other culinary delights while visiting Newfoundland.

I stopped in the hotel bar for a quick dose of a single malt scotch, a name I didn’t recognize and have already forgotten, but it tasted pretty good. I chatted with the staff (I was the only one in the bar), relating some of our experiences on the island. They seemed impressed that Chuck and I had traveled from so far away to visit their home province.

While there was nice riding today, it was more about long-distance landscapes than stuff happening right in front of the bike. Consequently, today’s video is ride-free. I encourage you to enjoy the zen of a minute or so of waves hitting the scenic shore lines.

Here’s the static map of today’s route, with the normal altitude overlay.

For an interactive map, use this one saved from Scenic app, which is what I used to navigate today.

Ferry day. We ride the last mile of our Newfoundland travels to board the 11:45am ferry, arriving in North Sydney at 6pm. We’ve got a room reserved a short distance out of North Sydney.