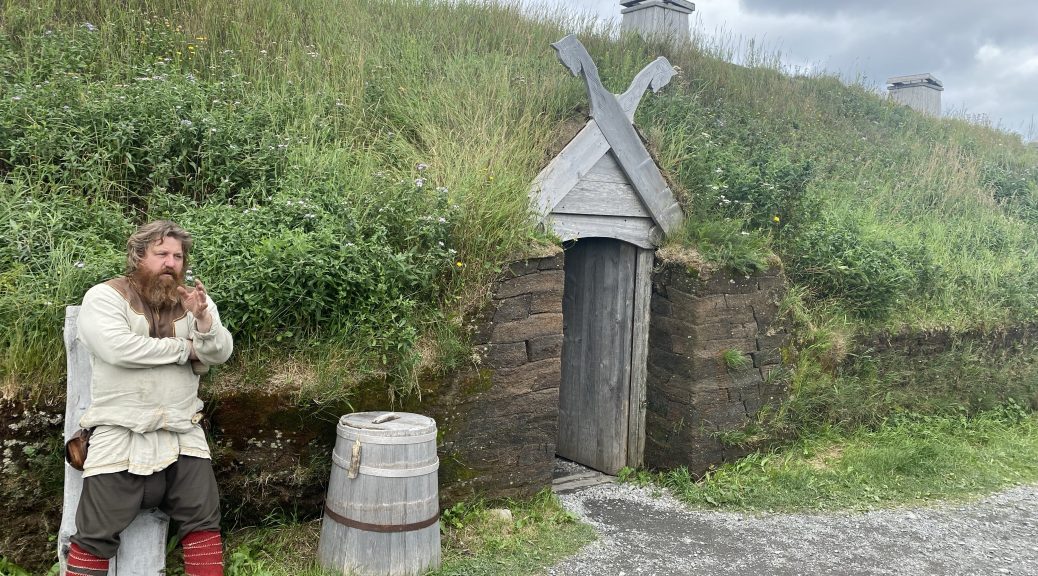 Today is short on ride and long on history because we wanted to spend lots of time at the L’Anse aux Meadows historical site.

Not much to tell here. We woke up, cleaned up, packed up, and left. We’d already gassed up the previous evening, so we immediately rolled out of St. Anthony and aimed the bikes towards L’Anse aux Meadows.

It was a little crisp this morning, with plenty of shallow cloud cover over us. There were openings in the clouds here and there, but it was mostly overcast.

Heading back on the 430 (Viking Trail), we retraced the last few miles of our route from yesterday. At the intersection with highway 436, we turned north to ride along the countless maze of inlets at the northeast corner of Newfoundland’s western peninsula. Most of these inlets had small towns, many of them with Viking-themed accommodations and/or gift shops, obviously taking advantage of the increase in tourist traffic due to the Norse dwellings discovered at nearby L’Anse aux Meadows.

As we neared the end of the peninsula, and the archeological site, the scattered forests gave way to the familiar tundra-like ground cover and near constant rocks protruding from the greenery.

We turned left into the L’Anse aux Meadows site and parked at the visitor center.

At little before (about) 1,000 CE, the Norse peoples had already established settlements as far west as Iceland in the North Atlantic. One of the Norsemen in Iceland, Erik the Red, got in trouble for killing a few too many fellow citizens in arguments and was exiled from the Iceland settlements. He gathered an estimated 25 ships of other people that wanted new adventure and sailed west to Greenland to establish new Norse settlements. The Norse presence on Greenland eventually grew to approximately 2,500 people, but Greenland presented special challenges, like a total lack of trees, vital for traditional Norse construction of homes and boats.

One year, a Norse captain had his boat blown off course to the south and as he did his best to work his way back north to the Greenland settlements, he noticed long stretches of inviting sand beaches and rich green forests. What he noticed was very likely the coast of what is now Labrador in Canada. This captain did successfully return to Greenland and related the stories of what he saw on his wayward journey.

About fifteen years later, a young Norse captain named Leif Erickson, son of Erik the Red, bought the boat from the Norse captain who had made that errant southerly trip, and ventured across the Davis straight and down the Labrador coast to what is now the northwestern tip of Newfoundland. The Norse navigated largely by landmarks, and the northern coast of Newfoundland sported a series of islands that had distinctive profiles; easy and obvious landmarks for other Norse sailors to find. At what is now L’Anse aux Meadows, they established what was basically a base camp from which to harvest wood and other resources to be taken back to the Greenland settlements. As a bonus, they could also use this base camp to explore areas further to the south, like the coasts of what is now Nova Scotia and New Brunswick.

Eventually, conflicts within the Norse leadership on Greenland, and new conflicts with the indigenous peoples of the new areas being explored, necessitated that the base camp at L’Anse aux Meadows be abandoned. The archeological evidence points to an orderly move-out where everything of value was taken after which the buildings were burned. Accounts vary as to how long the base camp at L’Anse aux Meadows was used; anything from 20-100 years.

What makes the site so significant from a historical standpoint is two-
fold:

The archeological site has a cleared area with a surrounding boardwalk that you can use to see all the sod-house outlines that are readily visible on the grassy areas near the coastline. Based on the artifacts found, archeologists were able to determine the most likely uses of the different buildings. Nearly all of them were at least partially living quarters, but each also had a specific purpose for at last part of its inside space. One building had an area for black-smithing iron. Another had an area dedicated to woodworking. Still another had an area for
repairing boats. Some of the smaller outbuildings were used for smelting iron from native ore, or storing food, or drying fish.

As we walked by the sod house remains, we encountered a UNESCO archeological team that was re-examining one small region near the old sod house foundations. We’re not bashful, so we asked one of the team members lots of questions. Curiously, the one thing they haven’t found, that they’d really like to find is the outhouse (latrine building(. That may sound yucky, but the remains of a outhouse would tell the archeologists a lot about the diet of the people who lived here, as well as a host of additional artifacts because the outhouse also served as the refuse pit for much of a Norse settlement’s garbage.

To help visualize what these buildings looked like back when they were intact, Parks Canada recreated a few sod houses in the traditional Norse style of that era. (Note: they could readily do this due to previous archeological digs of Norse settlements in Greenland and Iceland, where the common design elements of Norse sod houses are well established.)

Within the main sod house was a group of four residents in Norse dress of the period performing typical daily tasks for this kind of settlement.

Back outside the main building, we briefly explored the other buildings before we engaged one of the characters, Ragnar, in conversation. He answered a few questions about the site in character before we switched to more modern subjects and discussed things like the local fishing industry and challenges of the winter weather.

Here endeth today’s history lesson. There will be no quiz later.

Having exhausted our curiosity at L’Anse aux Meadows, we hopped back on the bikes and traveled south a few miles to “The Day’s Catch” restaurant, which came highly recommended by several people. Chuck deemed their fish & chips the best that we’ve had on Newfoundland so far. Needless to say, we dined well.

After our lunch feast, we turned the bikes back south, retracing our path from this morning. One we returned to highway 430, we turned west (south from the highway’s perspective) and followed 430 about 20 miles before turning onto an alternative road (highway 432) so we wouldn’t have to ride the rest of the day on previously traveled roads.

In hindsight, we’d have probably enjoyed the repeat performance more than this route.

Portions of 432 suffered from some of the worst road conditions that we’ve encountered all across Newfoundland. The roadbed had apparently suffered from lots of frost heaves, some of which subsequently collapsed, creating reps that traversed he entire roadway (so, no escape). In some parts, the surface was such a patchwork that we resorted to winding around over both lanes just to find a less tortuous path (luckily, there was no oncoming traffic; we were the only ones stupid enough to ride this road today).

As we reached the spine of the far north end of the Long Range mountains (about 950 feet), we rode under the only cloud in the sky that was dropping precipitation. It fell in widely spaced giant drops (it was as if each drop was a shot glass full of water), but only lasted for about 45 seconds.

This road was supposed to be the place most likely to provide a moose sighting. Naturally, no moose were sighted. I think we used up all our luck on the weather. We’ve already seen the more rare animal sights on Newfoundland: black bear and caribou… but no moose.

With much rejoicing, we finally reached the end of highway 432, turning north briefly on highway 430 before stopping for the night at the Plum Point Motel. Today only covered 137 miles, but it was still time well spent.

Since we only had three more days on Newfoundland, and we hadn’t needed to exercise the extra day we had in the schedule, Chuck suggested that we could forgo the extra day and use it to ride the Breton Trail in Nova Scotia. (We’d skipped it on the way to Newfoundland because that day had been rather wet and rainy.) I made some calls, and was eventually able to reschedule our ferry ride and update three different hotel reservations to accommodate this change. The only real downside is that we had to give up our 4-bunk cabin for the 7-hour ferry ride back to Nova Scotia; there weren’t any berths available on the new date. We do get reserved seats in reclining chairs with TV sets, but on nice berth. We’ll survive.

The Plum Point Motel has it’s own restaurant, and since there’s nothing else close except a gas station/convenience store, we elected to eat here. The food was adequate, but didn’t measure up to our fantastic lunch.

After dinner, we retired to our room to try and manage posting today’s trip reports on the dog-slow, Jurassic era WiFi provided by the motel. Oh, and there’s only two bars from the nearest cell tower, so slim pickings, indeed.

Here’s the old-school static map with the altitude overlay. Note the pass over the very end of the Long Range mountains; we just barely stayed under 1,000 ft.

Here’s a link to an interactive map of the day’s ride, provided by Scenic, which I used to navigate the day.

We ride back down the Viking Trail on the west coast of Newfoundland, back through the Long Range mountains to TC1 (Trans Canada 1), and down to Corner Brook.