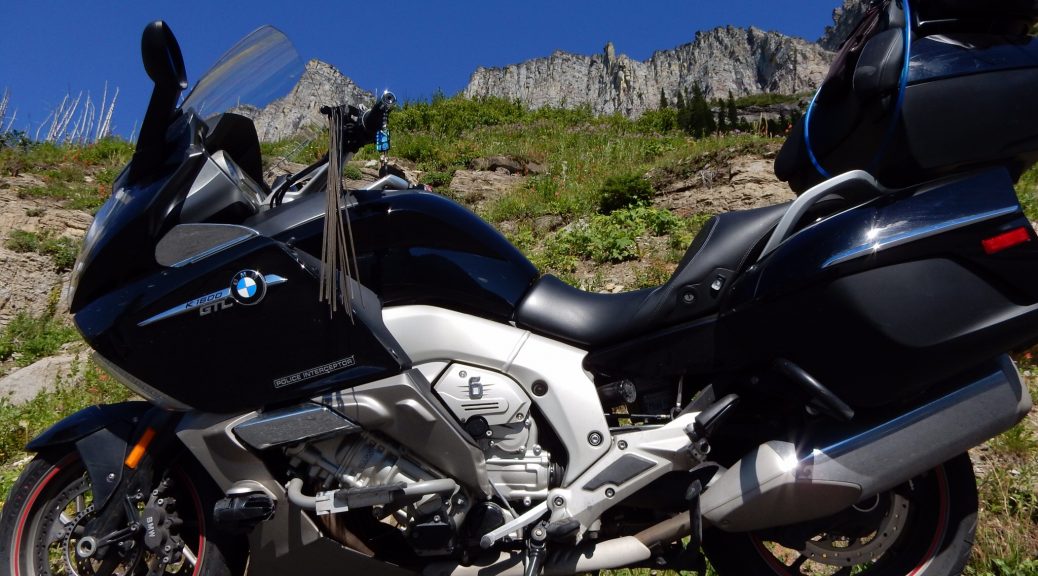 After three days and 1700 miles (2736km), today I was finally going to reach the mountains. Having been out here once or twice before, I wasn’t just going to see any ol’ mountains, I was going to ride through Glacier National Park.

But First, You Have to Finish the Plains

Starting this morning in Havre, MT, I ventured back towards town to take a photo or two from the bluff overlooking downtown and the BNSF railroad yard. The activity in this rail yard was virtually non-stop, building a little anticipation that I would see some additional rail activity when I left town on US2 to the west, which parallels the BNSF Hi-Line. 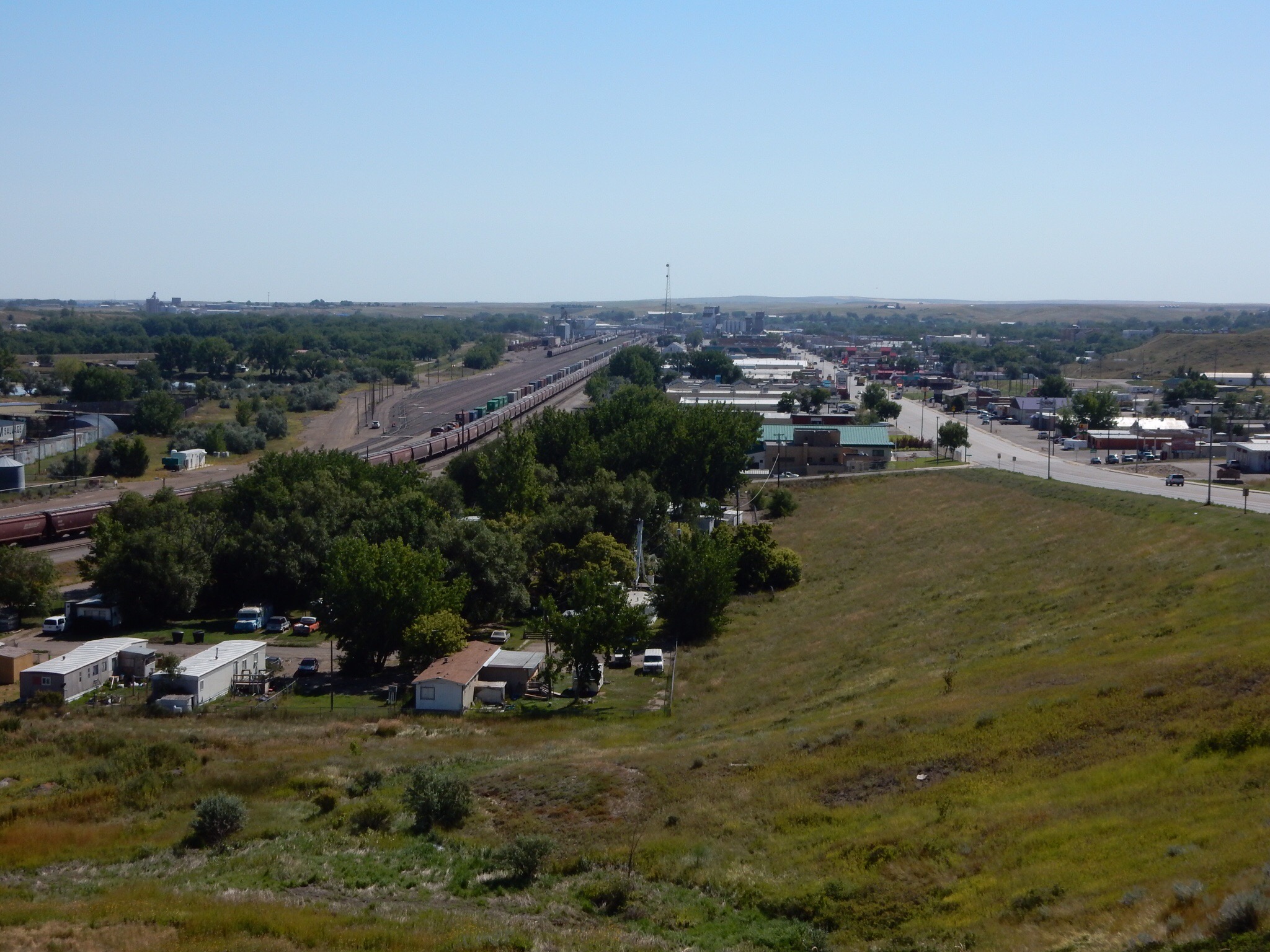 Heading west out of Havre, you crest the bluff on the west side of town and the landscape suddenly looks an awful lot like eastern North Dakota, which is to say flat as a pancake. After the rolling terrain that ended the day before, this would have been a bit of a letdown if I hadn’t already known it was going to be this way. You see, I’ve taken this route once or twice before.

Something I failed to mention yesterday was that this is apparently harvest time for many of the wheat-growing farmers in northern North Dakota and Montana. I saw plenty of combines in the fields and also on flatbed trailers being transported from field to field. The roadways were also a bit busier than usual with the grain trucks making their way from the fields to the local grain elevator. Similarly, I saw a number of grain unit trains (trains containing nothing but grain cars) traveling back and forth on the BNSF Hi-Line.

I had enough gas to get me to Shelby, MT, where US2 and I15 cross. I was getting gas in Shelby when I struck a conversation with an Ontario biker on a well-used K1200LT. In this case, well-used means fairly well beat up. It was missing both mirrors, had cracks on several pieces of bodywork, and a couple of stone chips in the headlight. Judging from the multitude of Iron Butt paraphanelia that adorned his bike and wardrobe, I gathered that this guy rode quite a bit. He’d been thinking about updating his ride to the K1600, so (naturally) we had much to talk about. Those of you who know me know that I like to, well, monopolize conversation. With this fellow, I could barely get a word in edgewise, even when I was trying to answer the questions that he was asking me. He was a total hoot.

The Ride Starts to Get Interesting

West of Cut Bank, MT, US2 starts to roll a bit. By this time, the previously featureless outline of the mountains on the horizon were much more detailed. You could pick out snow on some of the peaks and some of the forested mountainsides were now visible.

US2 doesn’t actually go through Glacier National Park, it goes along the southern border of the park. Consequently, I departed US2 in Browning, MT and headed north to St. Mary on US89. This stretch of road crests the first line of mountains before the main event culminates with the Going-to-the-Sun Road through Glacier.

I’ve ridden through Glacier National Park several times in the past, but it is always impressive. This year’s ride through the park was no different. I had gorgeous weather, warm temperatures, and (because the road is so twisty in places) no RVs to dodge around.

As you ride the GTTS Road east to west, you start with Lake St. Mary on your left as the mountains rise on either side of you. You hug the northern slope, always climbing until you’re high above the lake with an impressive view. Eventually you get to the Visitor Center at the summit. Then you start down the west slope. Within 10 seconds of leaving the Visitor Center parking lot, you crest the pass and the valley below you opens up and you can see this dramatic parnorama of the mountain valley and the GTTS Road hugging the right slope and slowing making its way down the mountain. It’s seriously awe-inspiring.

Rather than try and describe the scenery, I’ll let photos do the work for me.

Yet another mountain in Glacier NP.

The island has a name, but I forget it.

The mountains across Lake St. Mary.

The Nightowl and Lake St. Mary in Glacier NP.

Roadside mountains on the Going-to-the-Sun Road.

An almost hoodoo-like formation towers over the Going-to-the-Sun Road.

The Nightowl patiently waits to continue up the Going-to-the-Sun Road.

The tunnel on the eastern slope of the Going-to-the-Sun road in Glacier NP.

A classic tour bus heads up Logan Pass towards the visitor center in Glacier NP.

A classic tour bus heads towards the tunnel on the eastern slope of Logan Pass in Glacier NP.

The Nightowl and a classic tour bus on the Going-to-the-Sun Road.

Looking up towards the visitor center from the eastern slope of Logan Pass.

Yet another righteous vista in Glacier NP.

Behind the visitor center in Glacier NP.

Mountains behind the visitor center in Glacier NP.

A pika takes offense to all the visitors at the Glacier NP visitor center.

The money-shot view just west of the visitor center in Glacier NP.

A panorama of the spectacular valley just west of the visitor center in Glacier NP.

Loitering and taking photos just before the traffic backup in Glacier NP. That’s Dave (or David, I can’t tell which) in the distance.

A panorama of the view we had while waiting for the construction road closing to clear.

The road crews were working on one portion of the road where only one lane was open. Traffic was backing up on either side of this jam. Having seen this from a distance, I loitered a bit at one of the preceding parking turn-offs to take a photo or two. It was here that I encountered Dave and David (try to keep them apart). They were Harley riders who were both up here on BMWs the previous year. We talked shop about bikes for a while until I noticed that the traffic down the mountain was moving again between excavation cycles on the roadway. We parted ways and I slid into formation behind a long line of bikes. We talked a bit while we waited for the road to open again and agreed that, if you’re going to be stopped by a construction zone, having this as your view while you wait does not suck.

Once the road opened, I proceeded down the mountain behind my new-found friends. I reunited with US2 down at West Glacier and with the sun beginning to get lower in the sky, headed to Columbia Falls to figure out what I was going to do for dinner and a place to stay.

Arrangments for the Night

My first task once I got into Columbia Falls was to confirm that the Night Owl (not my bike) and the Back Room were both still in existence because I wanted to eat there this evening (and perhaps tomorrow morning for breakfast).

I spotted some shade in a credit union parking lot and got out the phone to find a campground. I called one and they didn’t answer. I called the second and they not only answered but confirmed that they did have tent sites and the tent sites were shaded.

I rode over to the campground and pitched my tent for the night. I gathered my iPad, camera, keyboard, and camera connection kit and made my way back into town to visit the Back Room. As usual, the back ribs were excellent. The sides of baked beans, cole slaw, and their legendary fried bread all went down very nicely. Even better, my (probably) slightly dehydrated condition was completely solved by a helpful waitress who keep my glass of lemonade filled no matter how many times I emptied it.

Since the Back Room has WiFi and a bar, I elected to stay here and write up the day’s report and upload a few photos. The barkeep was also very helpful and poured me a rather generous shot (more like three) of Maker’s Mark to give me something to sip as I wrote. (What a sweetheart.)

I’ve probably got a pretty long day ahead of me tomorrow, so I’m calling it quits.

One thought on “Let the Mountains Begin”