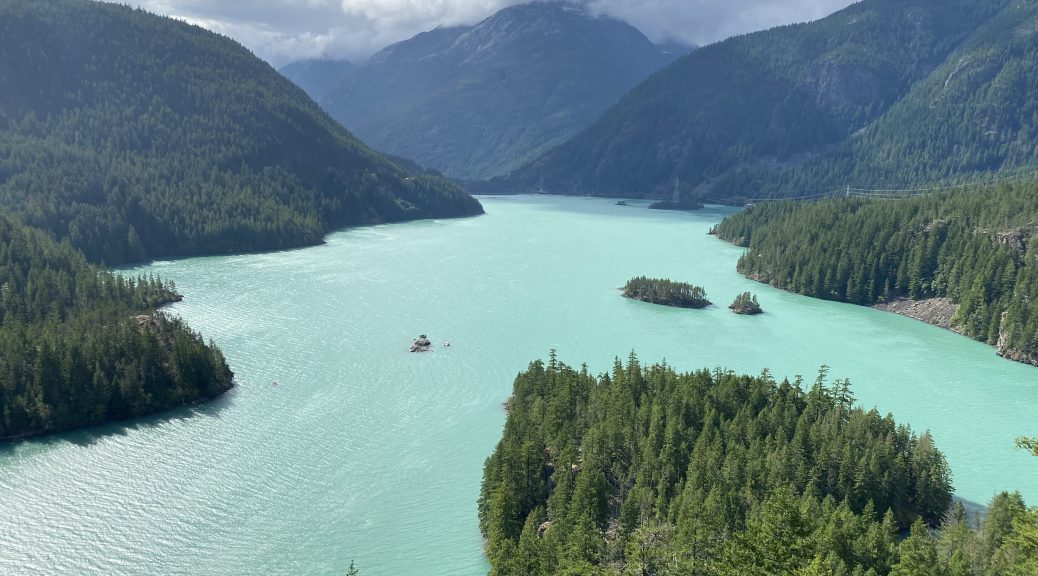 I decide to ride the North Cascades highway and visit friends who couldn’t make the Par-Tay, but I need to arrive before evening or their region turns into Wild Kingdom. Will I make it?

I got up about 9am and started breaking camp. It was a little warmer today and the sun was shining through a few breaks in the cloud cover, but not enough to turn the inside of the tent into a sauna. Once I was packed up, I joined he other remaining attendees for some of Jeanne’s coffee cake.

While I was packing, I’d decided to ride WA20 across all of Washington. The primary reason to do this is that the North Cascades Scenic Byway is WA20. I knew that this late a start meant probably only getting to the Okanogan/Omak region; there was a notch-above-scuzzy motel there in Omak that I’d stayed in before. However, the last time I stayed there, my friends Dennis and Nancy, who live another ~40 miles north of that, gave me significant grief that I hadn’t dropped by having been so close.

I decided to avoid another dose of abuse and sent a message announcing my plan. Sure enough, they offered a place to stay, along with a warning to get there before dark to avoid the inevitable close encounters with deer and also to avoid the entire herd of bighorn sheep that cross the highway south of there place every night.

But that route is only ~350 miles! Surely, I’d be able to cover that distance in the allotted six (or so) hours, right?

Maybe, maybe not. I’d done this route several times before and knew what to expect.

Part of the problem is that the route from the Par-Tay to the Port Townsend ferry dock is exceedingly well traveled and mostly two-lanes. It is not the road to try and make time on. Then you have to take a car ferry from Port Townsend to Whidbey Island. Then, once you’re on Whidbey Island, you have another 40 miles or so of similarly well traveled two-lane road that you never make good time on.

Once you get to Anacortes, you pick up another lane, but you also pick up stop lights every few miles. Then you cross under the I5 and go through a long progression of small towns with 25 MPH speed limits.

Finally, once you start to get into the mountains, now, you can start to maintain a good pace.

All of this was happening on an unseasonably cool day, so staying warm and sharp was important.

The last few attendees gabbed a while and I finally got on the road a little before 11am. As predicted, there was plenty of traffic northbound on WA3, so I wasn’t able to keep up a good pace or pass many of the slowpokes. When the highway turned into a four-lane at Bremerton, I made up some time by weaving through traffic. After that, it was more two-lane death march the last 20 miles or so to Port Townsend.

Once I could see the ferry dock across the bay, I could see that a ferry was in the dock. If I didn’t catch it, it would be another 30 minutes before the next one arrived.

At the loading lot, the car-herders had stopped allowing cars into the lot, so they were backing up in a designated overflow lane on the street.

Aside: Ferry companies love motorcycles. They pay a little more than half of what a car pays, but you can cram three or four of them into a single car’s space. You can also use them to fill up all the funky angles at the front and back of the ship with motorcycles. For this reason, motorcycles are definitely first-class citizens of the ferry loading lot.

The car-herder saw me and motioned me around to the pay stand and into the parking lot. I paid and was directed to the front of line 1. I noted that the ferry was almost full. There were only two rows of cars that were yet to be loaded. I pulled up and waited and the load captain saw me and wandered over to within earshot as she motioned the other cars on to the ferry, “We’ll get you on at the end.”

And so it was that I arrived at the ferry dock about two minutes before departure, and behind several dozen cars, yet I still got on that boat before it left.

The partial sunshine I’d enjoyed back at the Par-Tay was gone and it was now misting on and off. I’d only had a long sleeve t-shirt and my purple flannel on under my jacket.

I used the time of the passage to change my flannel and perf gloves out for my heated gear: jacket liner and gloves. I knew I was likely going to need it up in the mountains anyway. This was just a preemptive measure. After my wardrobe change, I took a few quick photos. The ferry actually had to hove to for a while to allow the other ferry to leave the Whidbey Island dock. Then it was time to get back down the bike to disembark.

Exiting the Ferry at Whidbey Island, you can turn right and follow WA20 or you can turn left and go…? The way that WA20 weaves around on the island, it is actually better to turn left out of the ferry parking lot. If you’re lucky and can make good time on that alternative route, you may even reunite with WA20 before the rest of the constant stream of ferry traffic catches up with you.

Ten years ago, it seemed like nearly nobody knew about this shortcut. Now, with everybody using GPS navigation, the advantage is gone. A good third of the ferry traffic took the shortcut.

From there, it’s a total slog through Oak Harbor, across Deception Pass (they were working on repainting the bridge, so I didn’t even stop for a photo), and on towards the spur to Anacortes, where the this two-lane death march acquires the blessing of two more lanes.

With the extra maneuvering room, did my best to make up some time, but it’s not easy when you have a stoplight every three miles or so.

By the time I crossed the I5, where a lot of traffic dutifully jumped on the Interstate, there was still a good number of vehicles venturing into the mountains. Normally, you could pass these vehicles since you’re not in the mountains yet and the road is mostly straight.

Now is when you have to navigate through several small towns that insist on having you idle through town a 25 MPH. Towns like Sedro-Woolley, Lyman, Hamilton, and Concrete.

At Concrete, I couldn’t put off stopping for gas any longer and I filled up the Nightowl. With any luck, I’d get all the way to my friends’ place in Oroville on this tank.

Now the traffic on WA20 finally started to thin out enough to release it’s death grip on my progress. When I got out in the clear, I could now travel several miles before encountering more vehicles to pass and now it was only one or two, not eight or ten.

The misty weather that I’d had through most of the day’s ride began to subside and give way to patches of sunshine. I was now in a deep east/west mountain valley (Skagit River valley) and the weather was coming down from the north. That meant most of the moisture was dropping out of the clouds before they crested the mountains to my north. I’d occasionally get a minute or two of light rain, but that was about it.

At Diablo Lake, I stopped at the overlook for photos because it’s too gorgeous not to, even if you’re kind of in a hurry. By now, the intermittent rain from the north was gone completely and I was enjoying more sun than cloud.

West of Diablo Lake, the traffic volume really dropped off and I was able to maintain a pleasantly spirited pace curving my way up to Washington Pass. This was another place where I decided to stop for at least a photo or two, even though it’s a 100 yard/meter walk to the overlook from the parking lot.

With the two main photo opportunities satisfied, I was free to concentrate on finishing the ride. WA20 west of Washington Pass cooperates with this idea by being less curvy. Unfortunately, there had been some fire activity here within the last week or two, I the posted speed limits were lower for a 10 mile stretch to handle the possibility of fire equipment sitting in the middle of the road. I saw a bunch of fire equipment in the pull-offs along this stretch, and I saw a huge fire camp down in one alpine meadow, but it looked like they were basically done fighting this one (at least by the road).

Exiting the North Cascades to the west, the terrain remains heavily rolling and worn with plenty of erosion, making for a gorgeously varied surface to pick up the late afternoon sun. My eastbound trips through this area always seem to be this time of day; it sure makes it pretty.

After getting through the nice little tourist towns of Mazama, Winthrop, and Twisp, I finally descended into the Okanogan River valley and the town of Okanogan. Here I’d cross the river and turn north on US97, which follows the River all the way to the Canadian border. I was doing pretty well on time, so I was confident that I’d get to my friends in Oroville before the Bambi witching hour. I’d given them the URL to my tracker map, but I’d promised updates by message, so I stopped just north of Omak to send a quick message confirming my reservation for their guest bedroom.

Even though I was definitely going to get there, I was beginning to see the previews of the coming onslaught of evening wildlife on the highway. Mostly I saw deer, usually nibbling the grass by the side of the road. I did see several elk in a field away from the road. I missed out on the nightly bighorn sheep migration across US97; I wasn’t exactly broken up about that.

Even though I hadn’t paid a visit in several years, I remembered where it was an pulled into my friends’ driveway at 6:25pm. That was just over 7.5 hours of travel time; not bad.

My hosts feed me a dinner of hamburgers and fresh corn on the cob. We sat up late chatting, drinking wine, and idly munching on chips and salsa (or was it pico de gallo?). It was great to catch up.

Here’s today’s map with an altitude overlay. Note the climb into the North Cascades and then the rapid drop out of them west of Washington Pass.

I think I stick to WA20 the rest of the way across Washington. I’ve done pieces of it previously, but never the entire path all at once.