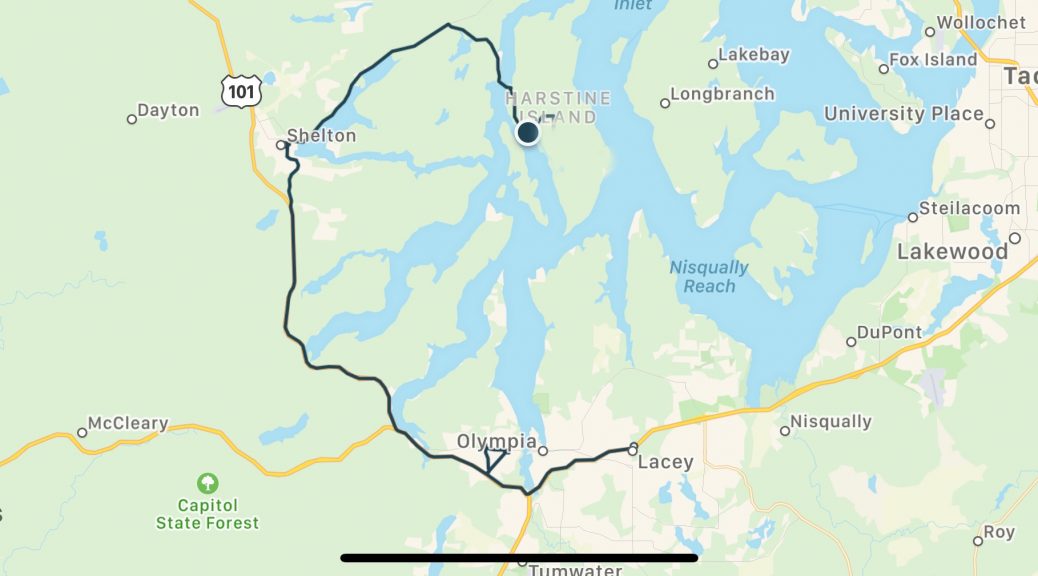 Today I team up with Bob to try and obtain a Covid 19 test on our way to the Par-Tay.

The previous evening, I’d sent a few messages back and forth with Bob to coordinate our efforts to get a Covid 19 test on our way to the island. The ultimate goal was to meet the requirements to cross the border into Canada, even if only for a day to visit our mutual friends there. The trick was that Canada required:

Bob and I were going to try and get tested at a walk-in Urgent Care clinic in Olympia, Washington. We’d meet there, get tested, and ride to the Par-Tay. Easy right?

I arrived at 9:57am and found a place to sit and wait for Bob to arrive. As it turns out, Bob arrived from the opposite end of the parking lot just a few minutes after I arrived and I couldn’t here his bike (another damn BMW) getting parked. I walked over the front door of the Urgent Care and Bob is already inside negotiating terms with the receptionist.

So, here’s how something that should be easy becomes less than idea, and finally a complete clusterfuck:

At that point, Bob and I gave up. We were both frustrated with the bureaucracy surrounding a simple lab test; it was nuts. I sent a message to our friends in Vancouver to let them know that we’d failed to find a way to get tested in the time limit. There was much weeping and gnashing of teeth.

Now we needed to ride to the Par-Tay, picking up our preferred beer, wine or liquor on the way (the Par-Tay is BYOB). I hadn’t eaten anything yet, so I wanted to pick up lunch on the way out. I even knew a great BBQ place in Shelton: Smokin’ Mo’s. Unfortunately, they didn’t open until noon and we were only 30 miles away in Olympia at 10:40am.

We have some time to kill.

I suggest donuts and Bob is on board. We ride to the nearest donut place, Doos Donuts, and the donuts inside look great but this place has no area for sitting down to eat and kill some time.

We travel to the next place, Phoebe’s Pastry Cafe. This is more of a baked goods place, and she only has outdoor seating and it’s misting a bit. The outdoor seating has umbrellas, so we decide to eat here. Bob gets coffee and a huge chocolate chip cookie. I get some hot chocolate and a cinnamon roll. If this is the start of lunch, we’re eating dessert first. Munching ensues.

Once we killed enough time, we hopped back on the bikes and rode out to Shelton, Washington, parking in from of Smokin’ Mo’s at about 10 minutes after they opened at noon.

Bob was so full from his monster chocolate chip cookie, that he just had a beer. I had some chopped pork.

At this point, we split up to gather our respective libations for the weekend. I visited a liquor store in Shelton to buy some Woodford Reserve. I looked, but they didn’t appear to have any. When I asked, the attendant pointed to a Woodford gift box on one of the front shelves. I whined that I really didn’t need to nice cut-glass tumbler that came with the normal bottle of Woodford. He informed me that these hadn’t been selling, so they’re currently priced significantly what the bottle goes for by itself.

Who am I to blow against the wind?

I buy the box and break into it back out at the bike. I stuff the glass with clean socks and put it in with the rest of my cloths. I put the bottle on the top of my saddlebag liner full of camping gear.

The ride out to the Par-Tay is part slog, part fun. Getting out of Shelton and off of WA3 is a slog; everything after that is curvy, hilly, and less traveled, so it’s great fun.

Just before the last turn, I thought I may have passed a familiar car, but I was going to fast to notice.

I arrived, apparently shortly after Bob, and gave our hostess a big hug.

Not all was happy at the Par-Tay. As I was preparing to set up my tent for the weekend, I unloaded my bag liners from the Nightowl’s saddlebags and top case, casually dropping the bags on the ground as usual. When the camp gear saddlebag liner landed, it did so with a distinctive “clink” sound, followed by something leaking out of the saddlebag.

The bottle had settled to the bottom of the bag during the short ride to the Par-Tay and cracked when I dropped the bag.

Luckily, Jeanne has some inside and offered its use for the weekend. She’s such a sweetie.

Here’s today’s rather boring and extremely short map. There’s no overlay this time because they didn’t add any interest.

Hang out with friends, swap lies, eat, drink, and be merry. The day after that I’ll leave the Par-Tay, but I haven’t decided where I want to go to start my path home.