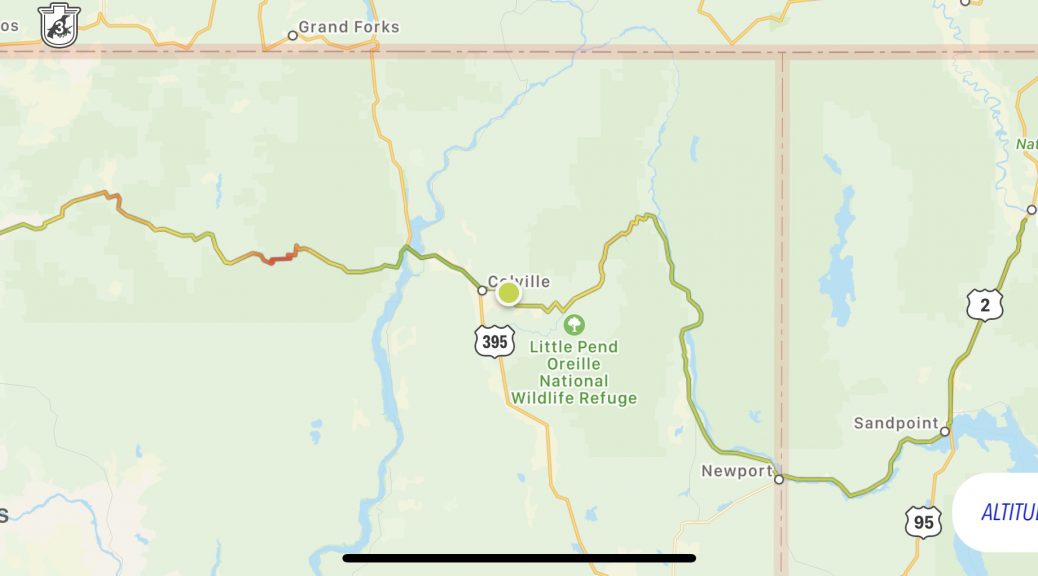 Today I’ve cross the remainder of Washington eastbound on State Highway 20 through the mountains.

Almost hoping it was a migraine, I popped an Imitrex at about 6am and went back to bed. With luck, the headache would be gone by the 8-9am timeframe.

Now I’m noticing more sinus congestion than before. Ok. So I talk a Sudafed and get into a hot shower to cook the crap out of my head.

Feeling a little better, and certainly cleaner, I finally present myself to my hosts. They’ve got some fruit set out for breakfast and I start nibbling away. As we talk and eat, I begin to feel a bit better; at least well enough to ride without being a hazard.

I pack up and wave goodbye to my friends a little after 11am.

While it was over 70º in Oroville, I knew it was going to be colder in the mountains, so I still had my heated gear on.

I rode down the Okanogan River valley to Tonasket, where I filled up with gas and turned east on WA20 again.

This stretch of WA20 isn’t about tight curves and switchbacks up and down mountains. It’s a little more relaxed than that. It does, however, still climb up, over, and around several ranges of mountains low and high. While the entire stretch from Tonasket to Newport only lists two official passes (Wauconda and Sherman), it certainly seemed like there was a lot more up and down than that.

I was only on WA20 for 15 minutes and it’s had risen enough to drop the temperature about five degrees F. I mentally patted myself on my back for wearing my heated gear. It got cooler occasionally when one of the several broken clouds contained just enough moisture to release some rain, but that never lasted more than about five minutes.

The ride through Sherman Pass was cloudier, wetter, and cooler. I had a good 15 minutes stretch of misty rain and a saturated road that spoke to heavier rain sometime just before I got there. At the crest of the pass, the temperature was 51º. Chilly, even more so in the mist.

Dropping down out of Sherman Pass led me to more sunshine and, eventually, the Columbia River valley. This part of the Columbia is an impoundment called Lake Roosevelt. The bridge over it is impressive and immediately adjacent to a truss girder railroad bridge. That bridge dumps you into Kettle Falls.

Somewhere along this stretch, my navigation app, Waze, lost its little mind. It insisted on routing me down US395 all the way to Spokane before doubling back north on US2. After I turned on WA20 east out of Colville, it was demanding that I turn around at every opportunity. After about 10 minutes of this, it just locked up and didn’t update until I restarted the app near the end of the days ride. I suspect that Waze’s problem is that it doesn’t recover gracefully from a long-term loss of signal. If it can’t communicate with the mothership for too long, it either looses its session or stops retrying to get communications back. Either way: bug!

At Tiger, the curvy mountain climbing of WA20 is done. You follow the Pend Oreille river valley down until you reach Newport and WA20 dead ends into US2. While this stretch of road isn’t as technical, it is rather scenic. There’s always a low mountain range to one side and the river someplace off to your other side.

Turning east on US2 at Newport, it’s an east 30 miles to Sandpoint, Idaho. It was there that I was going to plan the end to my day.

The headache that I’d started the day with had never completely gone away, especially with all the elevation and humidity level changes throughout the day. Consequently, I was ready to end the day as early as Sandpoint, even though I’d only traveled just over 200 miles.

A check of motel rooms found plenty of very expensive rooms in Sandpoint. However, up the road 35 miles in Bonners Ferry, there were room available at half the price. What’s another 35 miles?

By now, the smattering of clouds that were yielding rain were all to my south. The sun was out and I was riding north to Bonners Ferry in the late afternoon sun, paralleling a railroad track. I pulled in to my motel parking lot at 4:30pm, a uncharacteristically early stopping time for me, even in deer country. I didn’t care. I was going to catch up on rest, and perhaps catch up on trip reports. Oh, I should probably eat something too.

I found a dinner venue, Two Tones Cafe, literally two doors down from my motel. I parked the bike and walked it. This place was obviously more geared to outdoor seating, but this early in the dinner hour, there was plenty of room in the small indoor dining room. I ordered the “famous” pasta dish, which was basically chicken Alfredo over penne, but with the addition of mushrooms and veggies. What made the dish was their Alfredo sauce. It was wonderfully rich; cheesy enough that tendrils of sauce trailed down the plate when you lifted a fork full. It was exactly the kind of comfort food my body needed.

I got back to the motel and got to writing. With the close of this report, I’m all caught up… and it’s only a little after 9pm. I may get some sleep yet.

Here’s today’s map with an altitude overlay. Note the two main passes but other altitude “warm” spots along the way.

I have some options, but I think I’ll stick to US2. I’d love to ride the Going-to-the-Sun Road through Glacier National Park, but it’s been so overrun this year they’ve started only letting people through with an appointment to keep the volume down.