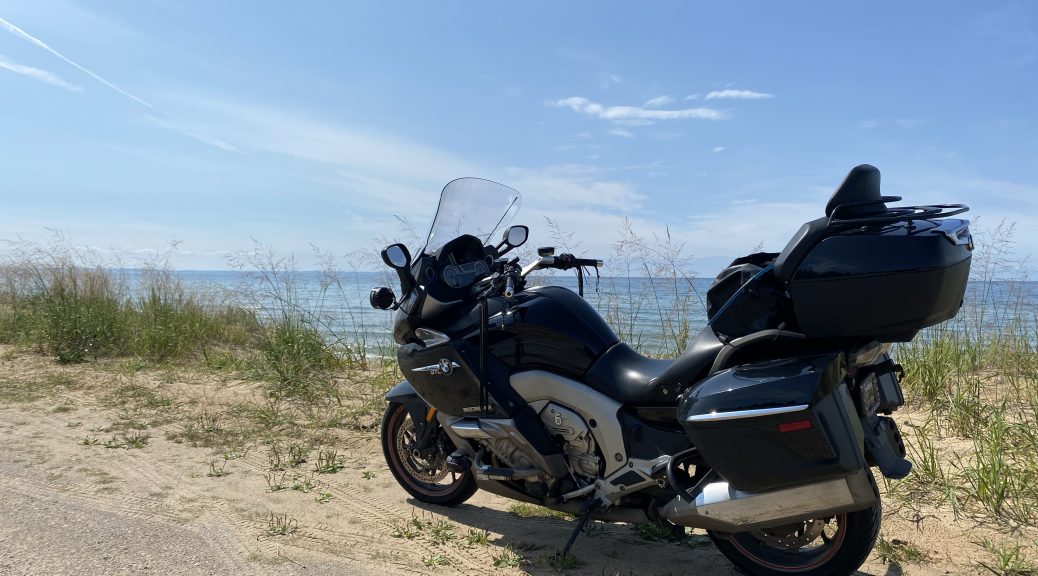 Today I finish following US2 east and turn south across the Mackinac Bridge for a nice slab blast home on I75. Then the weather decides to throw me one last curve.

I was awake before the 8:30am alarm went off. All it took was a quick glance outside to see the sunny blue sky and my brain was awake and ready to get moving down the road.

I still found reasons to dawdle. Answering few messages online, taking a shower, finding a clean t-shirt; these things sound simple but eat up time. The biggest delay was figuring out what to do with my newly broken boot. The main zipper had failed and it looked like my road tools were not going to get it to start working again, if at all.

I had plenty of extra lace, so I tied two knots: one at the top of the normal lace-up area, and a second after looping around to the rear of the boot.

I had the bike loaded and was pulling out of the parking lot about 10:15am. This was the scenery behind my hotel.

The basic plan was to take US2 from Gladstone all the way until it ended in St. Ignace near the Mackinac Bridge suspension bridge. Then I’d turn south on the I75 slab and get my butt home.

US2 mostly runs along the Lake Michigan shoreline on the south side of Michigan’s Upper Peninsula (UP). Being that it’s not as filled with elevation changes as your typical UP road, and the shoreline isn’t all that craggy, the road tends to be mostly straight and allows for plenty of passing lanes to get around the slowpokes. The K1600’s motor took care of making passes without a passing lane.

It was still a relatively cool morning, but I wasn’t wearing my heated gear; I’d happily stowed that away while packing, along with switching to my perforated gloves.

The route along US2 alternates between forest and shoreline, with short pauses to ride through nice little coastal tourist towns. I stopped at a park in Manistique to take a few photos.

East of Manistique, the highway dodged about five miles inland before merging from the forest and back to the shore near Naubinway. I was running short on gas and stopped to fuel up the Nightowl. I considered a quick snack because last night’s dinner of the monster sweet roll was beginning to wear off. I knew, however, that there was good food to be had less than an hour down the road at the Northern Lights restaurant in St. Ignace. I’d eat there.

US2 hugs the coast nearly all the way from Naubinway to St. Ignace, so I had several opportunities for nice lake views. I finally gave in to temptation and stopped for a few vanity shots of the Nightowl.

I then realized that I was always shooting the Nightowl’s ass and almost never from the front. So…

There’s a nice overlook at Epoufette, but trees have grown up so much in the last 30 years that you can’t see that much anymore.

As you enter St. Ignace, you finally get close enough to see the Mackinac Bridge. I dutifully paused for still more photos.

With my coastal photography duties out of the way, it was time for lunch. I rode across the I75 interchange and into St. Ignace. I pulled into the Northern Lights diner and…

Shuttered is a better word.

So, back towards the I75 interchange and a decision between a Big Boy and a truck stop restaurant. I see more tourist (loaded up) vehicles in front of the Big Boy, so I park at the truck stop.

The front door includes a pre-emptive apology for the slow service because they’re understaffed. Fine. I’m not in any huge rush. I get a seat and peruse the menu, becoming acutely aware that I haven’t eaten anything yet today.

I order a breakfast pastie (a normal pasty under sausage gravy), with hash browns and rye toast, washing it all down with Diet Mountain Dew. Waiting for my food, I putzed around with my phone, checking messages and watching a few highlights from pre-season football games. Perhaps I should have been checking the weather radar further down-state (foreshadowing?).

The food arrived and was rather tasty. I slathered the toast with some orange marmalade and proceeded to eat every morsel they put in front of me.

I pay the bill, visit the restroom, and head for home.

The Mackinac Bridge toll booths which bill both directions of traffic from the north side of the bridge, no longer take cash. They take cards and have their own pass module (like an EZ-Pass). I asked why they didn’t just do the EZ-Pass thing and the attendant said the EZ-Pass percentages were too high; they’d have to raise the price of the crossing to cover it. Alas, I don’t cross the bridge that often, so I will just hand them a card when I need to.

The bridge crossing was easy with little wind in the straits today. I ventured on and off of the dreaded metal grating in the center lanes to pass a few cars. It makes the bike feel squirrelly, but it really isn’t moving the bike around as much as it feels it is.

Over the bridge, I ramp up the speed to the allotted max (plus a little) and start the final push for home.

I had been making good time and was approaching the Indian River area when I noticed that the dark clouds ahead of me were not as isolated as I thought. I originally thought I’d pass under a few dark clouds and into the brighter weather on the other side, but the coverage of those dark clouds was growing by the minute.

Still, I could see through this front just five minutes ago. Surely I can motor through this and dry off (if necessary) by the time I get home.

The skies darkened further and the rain started to fall in small pockets of a spitting rain. As I neared the downtown Gaylord exit, the roads got saturated, which means lots of road spray. One mile out of Gaylord, the heavens opened and started throwing buckets of water down on me.

Passing the Gaylord exit and into the open fields near the airport, the forest that was shielding me from the cross-wind was gone and I started to get pushed all over the road. You know the wind is strong when the road spray from the car in front of you gets blown off the road before it reaches you.

After a few miles of the heavy rain and winds, I was back in the forest and had better protection from the wind. When the rain let off, I could see that the wind had actually stopped after I got through the leading edge of that storm front. Yuck. Let’s not do that again.

Another 20 miles down I75 at Grayling, the rain started to pick up again, peaking in deluge-factor about the time I passed the I75/US127 interchange. Then it let up again.

In the pause between getting dowsed, I took stock of my situation. My chaps and pants really weren’t that bad; I didn’t even have a wet butt. My perf gloves were absolutely soaked. My jacket was holding up OK, but was letting some moisture through at the front vent zippers. Overall, not too bad given the conditions.

Ahead of me, I was mentally measuring another span of dark clouds ahead of me versus my projected path out of harm’s way to the southeast. As long as I could keep moving, I should break out of this.

Then my body reminded me of all that Diet Mountain Dew that I’d drank back at lunch. I didn’t need that kind of distraction in storm driving, and there was an exit (Roscommon) right now with a gas station.

It will only be a minute… tops.

I take the exit.

In the 100 yards (meters) from end of the exit to the gas station, it started raining heavier.

I can’t exactly stop now, I was almost through this. If I wait it out, I could be here for the next hour or more.

When I emerge from the restroom, it’s pouring again. I hop on the Nightowl and point it back towards I75 south, bound and determined to get past this weather before I have to wait it out for God knows how long.

The heavy rain had saturated the roads again, so road spray combined with the downpour made visibility a challenge. The wind picked up again, but this time it was much more gusty than before. I found myself grabbing a little brake every time the wind tried to bitch-slap my ass off the road.

After a mere five minutes of this torture (it seemed like 30), the wind and rain both tapered off abruptly. With the sudden increase in visibility, I could see the far end of the dark cloud cover. I may actually get out of this crap yet.

With the help of I75’s path to the southeast, and my renewed ability to ride with pace, I finally broke away from the clutches of that damn storm. I set the cruise control and rode no-hands as I tried to wring out my leather perf gloves.

At a gas stop in Bay City, standing in hot humidity and bright sunshine, I opened the history view for the weather and pulled the following image. At this stage, I would have been just about to enter that last storm cell in the center bottom.

By comparison, the rest of the ride wasn’t just uneventful, it was bloody boring. It was a Saturday, so most of the weekend travelers up north were not yet heading back to the cities down state. I made good time and pulled into my driveway a little after 6pm.

I unpacked and moved back into my humble abode. The chaps and jeans were basically dry. My jacket was dry on the outside, but my t-shirt was damp in spots by the water infiltration at the vent zippers. My gloves were nearly dry and the inside of my helmet was only a little damp at the internal forehead padding. Overall, not bad at all for having not had the sense to put on the damn raingear.

The Nightowl was in good shape, although now she’s a little late for an oil change, which I’ll perform next week. The front tire still looks like it has some tread life, but the rear is about done. The center is worn down to the wear marks in the tread. I’m pleased that I got 8,622 miles out of that rear tire.

Sleep in, gather all my GPS track data, and make a summary page for the trip.