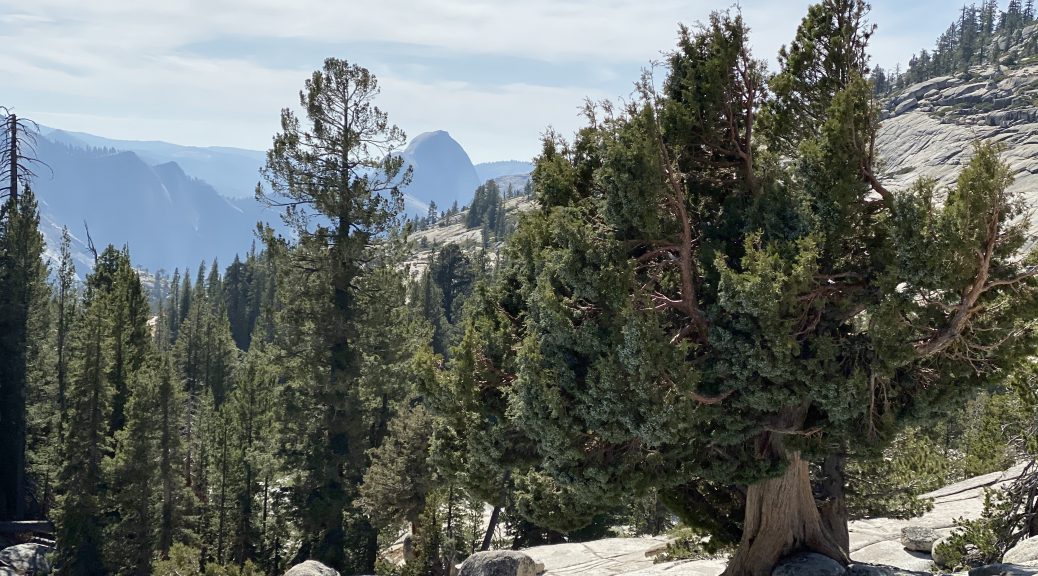 One last day to get over the Sierra Nevada range and on to the party.

Pete is a morning person, so he was up early. Tud and Ange are still on east-coast maritime time (+4 hours), so they were up early. I didn’t move until 7:45am. The bikes were waiting, patiently, in the bright sun from cloudless skies. The bright sun, however, was a bit misleading, as it was still fairly chilly.

We loaded up the bikes and walked down the street to the Totem Cafe for breakfast. Food was consumed, lies were told, at least one picture was taken.

One last visit to the hotel rooms to gear up and we were on the road a little later than usual, but still a respectable 10:15am.

Most of the first half of the day was going to be on US395 north. This passed quickly and without incident. We had the mountain ranges on either side framing our view, with only a few spots of snow clinging to the Sierra Nevada range to the west.

When we reached Bishop, we diverged for our little detour for the day. Sure, we could have continued north on US395, but that’s more of what we’ve been seeing for the first hour or so. Instead, we turned off on US6; the very beginning off US6 at the western terminus of this legendary highway. Just out of town is a mileage sign for Provincetown, Massachusetts, only 3,267 miles away.

About 34 miles north on US6 you reach the thriving metropolis of Benton, CA, all 17 buildings of it. This wouldn’t be worth noting if it wasn’t for the intersection with CA120, which heads off to the west back towards the mountains.

The stretch of CA120 between US6 and US395 is not much more scenic than the surrounding roads. What makes it fun is that the road crew that built this road refused to perform any excavation to create a level road surface. As a result, the road follows the nap of the earth, right down to every little rise or dip. Taken at, oh, 70mph, this road provides a roller coaster ride that rivals the best rides in an amusement park. If you’re running up or down US395 and can afford another ~40 miles of extra time, take this road and see if you don’t shout “Weee” a few times.

Back on US395, we turned north for a few miles and filled up with gas in Lee Vining. We doubled back the mile to CA120 and headed west off Tioga Pass.

The run up Tioga was fun and without too much impeding traffic. As a lead, I committed the sin of passing the only paved turnoff on Tioga pass without stopping for photos. (My name is Ghost, and I’m an idiot sometimes.) Over the top and down the west slope a bit, we reached a lake next to the road and took a few photos there:

Ange, Tud, and Pete at a lake west of Tioga Pass.

Tud and Ange along CA120 west of Tioga Pass.

A bit further along, we stopped at an overlook that included the back side of Half Dome in Yosemite National Park.

A panorama with Half Dome off in the distance, west of Tioga Pass.

A gnarled old tree with Half Dome off in the distance, west of Tioga Pass.

We kept riding down the mountains, dodging one herd of deer, venturing around a few slower vehicles, and turning right on Big Oak Flat Road (which is technically still CA120, but we’ll use the name because it sounds really cool).

This road took us through the small town off Groveland, home of the Iron Door saloon, the scene of many Netscum shenanigans over the years. We didn’t stop, but I waved at the front door as we passed.

We continued to weave down the mountain until we stopped for gas in Copperopolis. The last 20 miles or so passed quickly and we arrived to the welcoming arms of those who arrived before us. I barely managed to get my tent set up before I was sucked into the vortex of friends that I haven’t seen in far too many years.

Here’s the map and altitude track for the day.

Hang with friends, take a day ride (perhaps), do a 12k service on the Nightowl, eat good food, and consume adult beverages.