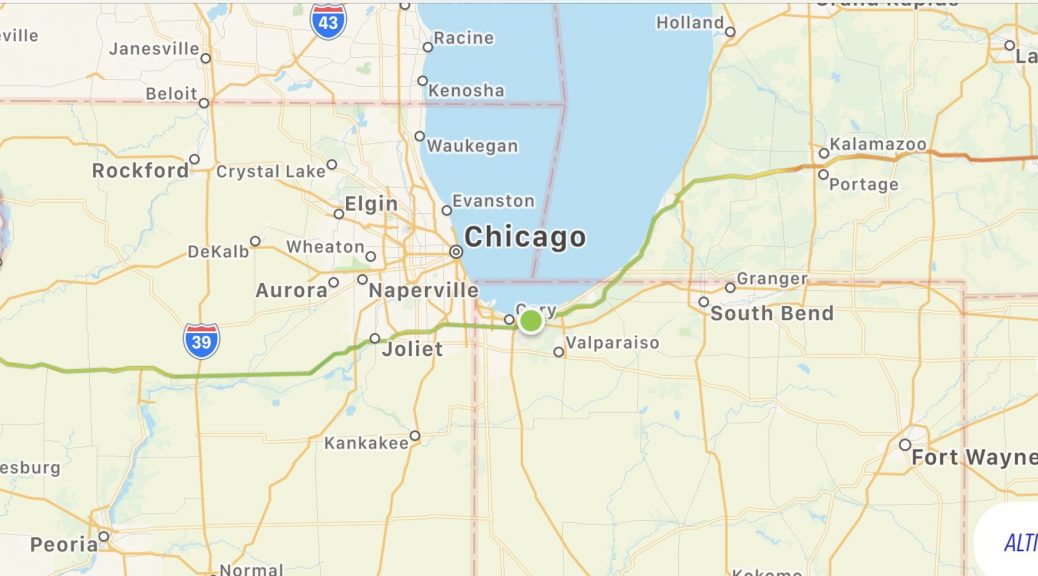 I forgot to set an alarm, consequently I overslept. By the time I woke up, showered, got breakfast (they served until 10am), and packed the Nightowl, it was just after 10am.

I’d already topped off the tank before I stopped for the evening last night, so I simply hopped on the bike and merged onto I80 east.

First and foremost, there was nowhere near as much wind as I experienced yesterday. It was still sunny with scattered cloud cover and a little cooler than yesterday. I had the heated gear on and set to a low simmer.

Around the east side of the quad cities (Davenport, Rock Island, Moline, and Bettendorf), I crossed the Mississippi River, which did not look overly high in its banks. The Rock River, however, was still above flood stage by almost two feet (according to local flood warnings). I can see a campground that I stayed at several years ago from the I80 bridge over the Rock River; the campground as mostly under water.

The rest of the ride across Illinois was fairly uneventful. The pace was good and the traffic level fairly light. As usual, it got more congested as soon as I got near Joliet, but there were no areas of stop-n-go traffic.

Across the Indiana line is where the worst congestion hits; not today. The pace reduced slightly, but still no stop-n-go conditions.

I finally stopped for gas in Bridgman, MI. There was a fellow BMW rider and we struck up a conversation. He’s from Toronto, Ontario and headed (second day) to Chicago. He had questions about my heated gear.

Back on the road, I94 started to congest after mile marker 35, which happens to be where we lose our third lane. It was more of a challenge to keep up a good pace, but I managed.

Passing east of Kalamazoo, I cast a wave in the general direction of Milo and Janet. I’ll have to actually stop by someday.

The rest of the ride went quickly with no mishaps or unfortunate stupid driver tricks by the cars near me.

I pulled into my garage at just before 5pm and received a rousing reception from Cricket (german shepherd). The girls were out running errands.

There is no tomorrow. I’m home. Actually, there’s sorta a tomorrow since I’ll post a summary page for the trip and wrap it up with a browsable map and some statistics from the trip.