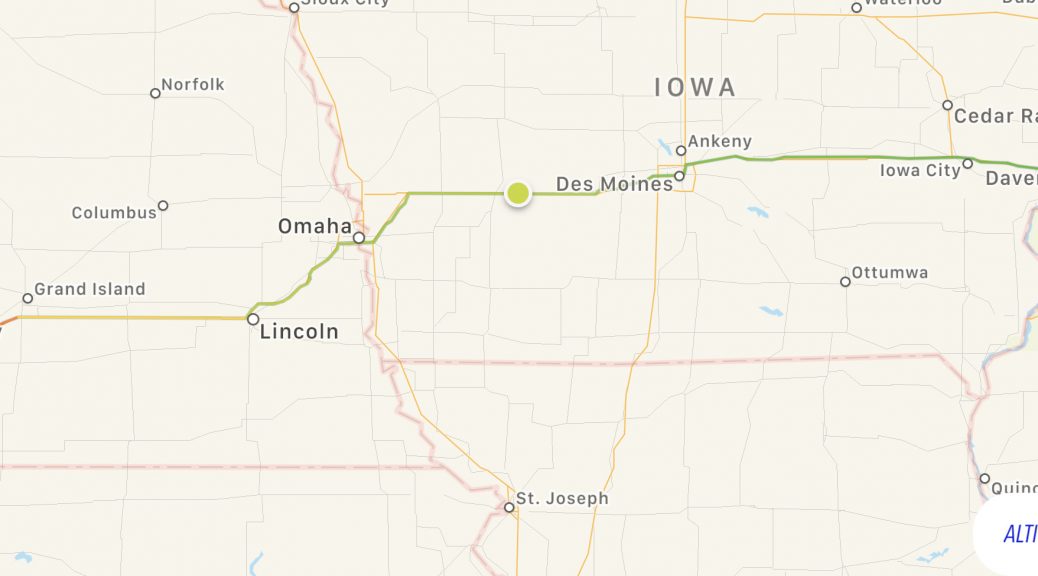 A boring dash across the plains, unless it’s windy as hell the whole damn day.

Yet another sunny morning, only this time it wasn’t overly chilly. It was, however, fairly windy and I looked forward at the forecast at at couple of choice spots down the road (Grand Island and Des Moines). Grand Island called for a high in the low 70ºsF and 25 mph winds out of the south-south-east. Des Moines called for a high in the upper 60ºsF with the winds peaking at 20mph from 2-4pm. So I surmised that my riding conditions (wind-wise) would improve as the day went on.

If I’d only known that the one Iowa city I checked was the only one along I80 that wasn’t under a Wind Advisory.

Blissfully ignorant of the shit day I was about to have, I calmly ate breakfast and loaded the Nightowl.

I visited the Casey’s next door to top off the tanks, but they only had two flavors of gas: a regular unleaded at 87 octane and a super unleaded with added ethanol rated at… 87 octane? What the fuck?

I checked my range and found that I still had over 150 miles left in the tank. Fine. I’ll get gas down the road a bit.

The Ride through the Winds of Hell

Jumping on I80 east leaving Kearney, I immediately noted that the winds that felt relatively light while loading up felt a lot less light at ~80 mph. The problem was the wind came out of (roughly) the south, which meant it was directly across my path.

There are few things that ruin a riding day. All day rain, if it’s heavy, can do it. Oppressive heat, especially if it’s couple with high humidity, can also do it. One other thing that can ruin the day and make you wish it was over is heavy gusting cross winds for 473 miles straight.

Welcome to my personal hell.

The wind at the start of the ride wasn’t too bad. I just had to lean to the right a bit to stay in my lane. Passing trucks, however, I encountered a healthy gust as the wind off the leading edge of the truck deflected to both sides.

By the time I got to Grand Island, the steady state wind velocity gave way to stronger gusty winds. Now it was a full-time job just adjusting the lean into the wind to stay in my lane, never mind the extra adjustments for the aforementioned truck passes or (god forbid) overpasses. It got to the point where I avoided passing a truck on an overpass since these combined multipliers on the wind speed were fairly debilitating.

I stopped for gas in the small town (actually, the town was nowhere in sight; the gas station was the only thing near the highway) of Henderson, Nebraska. After filling up, I pulled up the local forecast, where the current conditions cited the wind as being out of the south-south-east (I knew that) at 25-30mph. The forecast didn’t mention gust speed, but I’m willing to bet it was up near 40mph.

Back on I80 east, I continued my fight to stay in my lane against the desires of the wind. I’d turned on some music, which helped pass the time and make each mile a little less interminable. I knew I wasn’t the only one having trouble with the wind. Several trucks were running slower than usual (one slow enough to have his hazard lights on; a box van probably running empty). Just before Lincoln I encountered a capsized trailer in the right shoulder. A dualie pickup was towing a industrial generator, the kind that is permanently mounted to it’s own trailer. The trailer, unfortunately, is not full width and the generator is tall. It had tipped over and broken off the hitch. The driver had managed to pull it onto the shoulder by the safety chains. Poor bastard; he’s going to have fun trying to get that thing upright again.

With my hands, arms and neck getting sore from the constant effort, I finally got a break at Lincoln, where I80 turns northeast, which dulled the impact of the wind by a substantial amount. I still needed to be on my toes when the road occasionally curved more to the east, but I could relax a little.

At Omaha, I80 curves around a bit and the wind went back to kicking my ass, especially on the bridge over the Missouri River. Curving around the south side of Council Bluffs, I80 turns back northeast and I had my second break time with the wind not constantly molesting me.

When I80 returned to a due-east trajectory, it was a rude awakening. The wind had become much less consistent, requiring constant lean adjustments to keep a straight course. To make matters worse, Iowa is more rolling than Nebraska. Usually this is a good thing since it adds visual interest. Today, it just gave the wind more ways to fuck with me. Ride over the top of a hill, endure a gust of wind. Ride down into the base of a valley, get clobbered with a concentration of wind. Do either of these things while passing the nose of a truck, and you shit your pants as you barely keep the wheels from venturing onto the left shoulder.

I stopped for gas in another tiny town, Adair, Iowa, where everybody else who was fueling up stopped by to ask about how I was dealing with the conditions. Most of my responses were in the “It’s not any fun” vein. I used the stop to check local weather conditions and found that Adair (and most of central Iowa) was under a wind advisory, calling for 25-35 mph winds with 45 mph gusts. I didn’t need the forecast to tell me the wind was out of the south. Iowa has plenty of wind farms near I80 and every single turbine was facing perpendicular to my path of travel, spinning like a B17 propeller at take off. I resigned myself to my predicament and continued east.

I still had the music on, but I wasn’t listening as much as I was trying to guess the song that was playing over the howling wind. There were a couple that completely stumped me until I looked at the readout of the song name on the dash.

Just before Des Moines I encountered my second capsize of the day. This time it was a small utility trailer that had been piled high with hay bales. This guy had been running without safety chains, so his trailer and tow vehicle ended up on opposite sides of the highway. The trailer was upside down on the left shoulder with his hay bales broken up in the median and blowing away into the next county. His tow vehicle (mid-sized pickup) was on the right shoulder with a completely mangled rear bumper. It looked like the entire hitch receiver was gone. (Having said that, it was a fairly rusty pickup.) Based on the skid marks on the road leading to the pickup, the driver had pretty wild ride before he ended up on the shoulder.

True to the morning forecast, the winds were lighter in Des Moines. I’m not sure why. Perhaps it was because the city lies in a broad river valley. (Shrug) I don’t know. I was hoping that was the end of it, but the wind resumed my ass kicking just east of the city.

About the time I reached Iowa City, the wind had gotten a bit less gusty. It was still strong, but it didn’t require the same level of constant input to stay in a straight line.

My range gauge was down to 8 miles when I pulled into a gas station at my usual exit in Davenport, Iowa. I say usual because this is where there’s a low-priced motel right next door to a Machine Shed restaurant. This was a good jumping off point for the evening and would leave an easy ~400 mile day to get home tomorrow.

Surely I could ride on another hour or two and leave less miles to travel tomorrow. Perhaps, but I already felt like I’d gone 10 rounds with Muhammad Ali. I was sore, beat up, and hoping for better conditions to cover the remaining distance tomorrow. I checked the forecast for tomorrow morning and the wind speeds were much lower, topping out at 10 mph.

I quickly pulled up my hotel app, booked a discounted room (two doors down from the gas station), and rode over to check in.

After moving my junk into the room, I took one look in the mirror and noticed that my face was dirty. Even inside the full face helmet with the face shield down, the wind had kicked up so much dust and dirt that my face was dirty. I can’t imagine what it would have been like to ride this day in a half or even three-quarter helmet. I washed my face off, threw on a jacket, and walked across the parking lot to the Machine Shed.

Being that it was a Friday, the special at the Machine Shed was all-you-can-eat fish fry. Instead of my usual Bacon Bloody Mary, I opted for an Adult Hot Chocolate, which was as warming as it was intoxicating. The fish fry was cod and it looked pretty tasty so I tried it. No sooner than I took my first bite of my second piece of fish than the waitress asked if I wanted a few more. Uh, yes, please.

With my innards full of warm comfort food, my blood pressure was back down to a sane level and my shoulders were no longer up around my earlobes. I took a nice calm walk around the back of the restaurant and over to my hotel room, comfortable in the notion that tomorrow would have to be an easier day.

Continue east on I80, switch to I94 at Chicago, roll around the south side of Lake Michigan, and east until home.