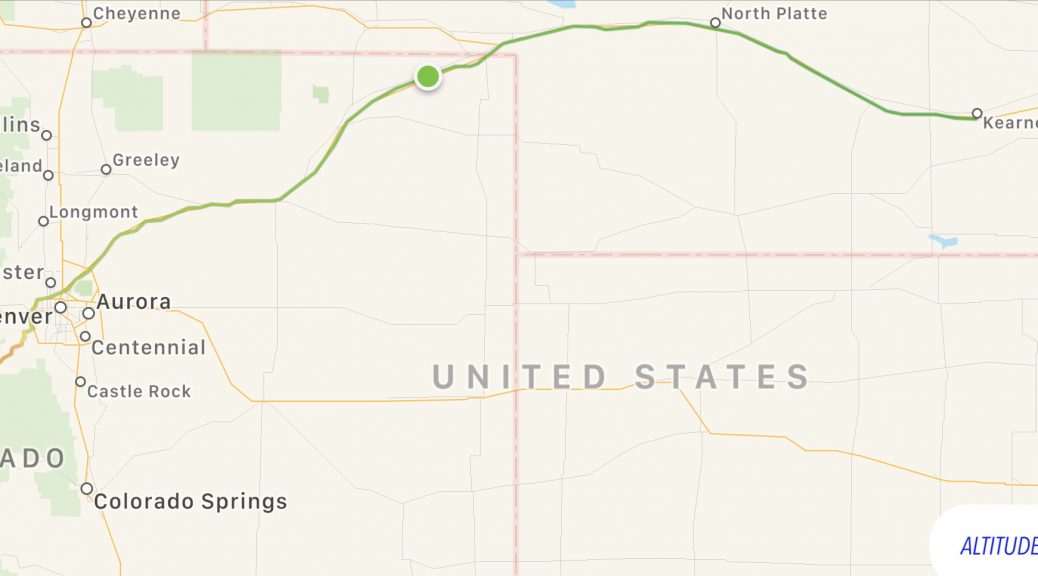 I bid a sad farewell to the Rockies and start crossing the windy Great Plains towards home.

For the first time this entire trip, the morning wasn’t completely sunny. There were scattered high clouds that only slightly dimmed the suns rays. The temperature, however, was the same: cold. As usual,I was I no hurry to venture out into the morning chill, especially since I had to go through a 10,000 foot pass in the first hour.

I ate a quick hotel breakfast and packed slowly.

The Ride to Denver

US285 was my most direct route back to Denver. It’s also one of the more popular non-I70 routes in/out of Denver, consequently it tends to get a lot of traffic. That’s the bad news. The good news is that much of it in the a high plateau and has ample room for passing lanes and good sight lines for passing when no passing lane is available.

Leaving Buena Vista to the east, you start out with a climb, past the KOA that I stayed in back in 1998 (in much warmer conditions) and up to ~9,500 ft Trout Creek Pass. You’re descent on the east side of the pass barely begins before it’s over and you’re in a wide plateau bordered in the distance by mountains. This is your scenery all the way to Fairplay.

East of Fairplay, you head up through a low pass only 500 feet above the plateau. That dumps you out into another high plateau and you have that to cross all the way to Jefferson. The road crews were painting road lines through this stretch, so there were several multi-car lineups that I needed to pass. The Nightowl is made for this shit, easily picking of vehicles a few at a time until I’m out in the open all the way up to Kenosha Pass at ~10,000 feet.

It had been a bit warmer crossing the plateau in open sunlight. Up over Kenosha Pass it chilled down again and it stayed cool as the descent dives into a canyon. Like yesterday, there were traces of snow here and there in the shady areas.

The canyon descent continues through a few small towns and everything from tired old vacation dude ranches to multi-million-dollar log homes perched on mountainsides.

As the canyon begins to open up, the road becomes a four lane and the pace quickens as if anticipating the entrance into the Denver metromess.

The Ride to Kearney

I hit Denver at high noon, which sounds like a line from an old western. In this case, it was by design since I wanted to fight through the city before the afternoon rush hour would start.

I took CO470 up to I70, which I followed eastbound until turning off on I76 east towards Nebraska. It was much warmer in the city, but not so warm that I felt compelled to pull over to remove my jacket liner and gloves (though they were both powered off). The only backup I saw was on another highway, US87 southbound, presumably it was carrying extra traffic towards Mile-High Stadium, where the Broncos would be playing that evening.

Between the higher highway speeds and the presence of a slight headwind, I needed gas by the time I reached Brush. I gassed up the Nightowl and got a quick snack for myself.

Back on the road, conditions changed when I hit Sterling; the wind from the south got a lot stronger and hotter. I noticed sweat forming on my hands still in my electric gloves (albeit turned off) and checked the temp: it was suddenly 85ºF. Between my highway pace and the south wind, the heat was still tolerable so I postponed a wardrobe change.

By the time I reached the Nebraska state line, it was up to 87ºF and the wind from the south got stronger and gusty. Time to drop some gear. I stopped at a convenient rest area and dumped the jacket liner, replacing the heavy gloves with my perforated gloves. I think I hadn’t used the perf gloves since the day ride to Big Trees at PITS; that was 1,500 miles and two timezones ago.

I stopped for gas again at North Platte, wincing as I calculated my gas mileage with all this wind. After 40+ mpg for several days, here was a mere 36 mpg.

It’s only another hour to Kearney and I was strongly considering pushing on another hour to Grand Island. During these deliberations, the sun sank low in the sky and the temperature started to drop at a precipitous rate: about 1 degree each 3 miles. I figured that I’d need to dig out my cold weather gear again if I pushed for Grand Island, so I blew it off. This decision was backed up by the knowledge that Karen and I had ridden from Kearney to Davenport, IA (tomorrows goal), even with a late start.

Just off the highway, I pulled into a parking lot to jump online and reserve a room for the night. After a short ride down the road, I checked in, moved my junk to the room, tested the hotel WiFi, and grabbed my stuff for dinner.

The Whiskey Creek BBQ is a place that Karen and I visited last summer and it was pretty good. I had them rustle up a marguerita and some spicy chicken pasta called “Rattlesnake Pasta”.

Then it was back to the room to write up this report with Thursday Night Football on in the background.

Here’s today’s route map and altitude chart. You can clearly see the early mountain passes and plateau, followed by the steady downhill trend after Denver.

Continue east on I80 across the rest of Nebraska and, ideally, all of Iowa. Davenport Iowa is an easy 400 mile ride to home and happens to be where I can eat dinner at the Machine Shed. Both worthy goals.