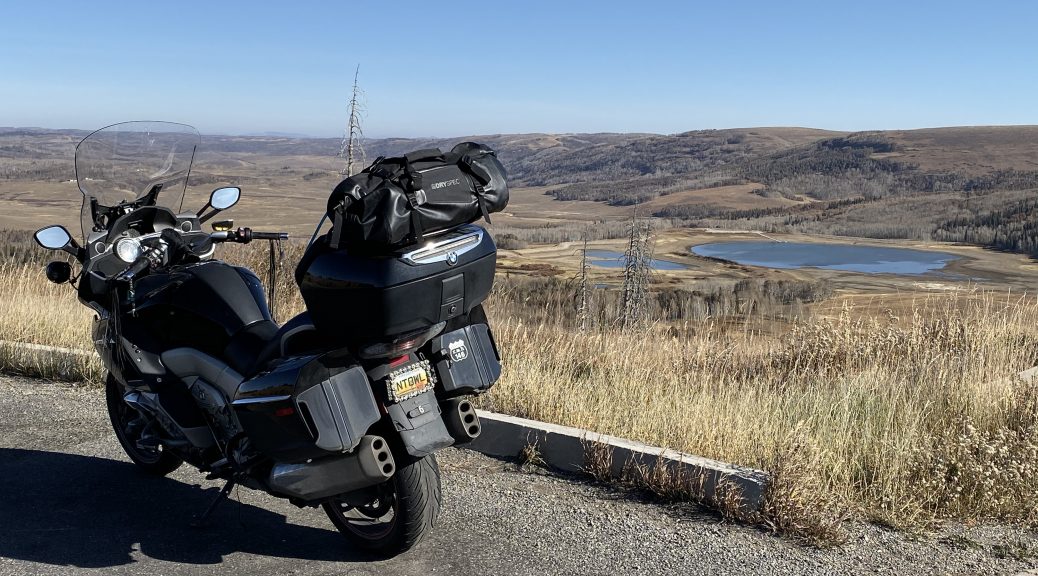 A trek from central Utah into western Colorado on a few new roads and a few that I’ve traveled before.

I awoke to another sunny but chilly day. Not anxious to ride out into the early morning chill, I took my time with a shower and a bite at the motel breakfast room.

The day would start with a few roads that I’ve never traveled. I would then finish the day on roads that I’ve traveled at least once (some, several times). I had a total of three (3) days to get out of the mountains and into Nebraska, so I wasn’t particularly in a hurry. Consequently, today wouldn’t be too long.

I packed the bike and got out at about 10am.

Last night when I arrived in Mount Pleasant, I didn’t see much of the town since I was in a hurry to get to the motel ahead of the darkening evening. Now, in the bright light of morning, I fully appreciated just how deep I was in Utah ranch country. The pickups outnumbered cars 10 to 1 and most were either dualies or flatbeds. As I passed the Mount Pleasant high school, I noted that the bleachers around the football field weren’t nearly as nice or as plentiful as those around the rodeo grounds. As I left town, I noticed that the recent Downton Abbey movie, with all it’s sophistication and classic society aires, wasn’t playing at a cineplex; it was playing at the local drive-in.

The road to Fairview followed the edge of the mountain range on the eastern edge of this valley. I knew that Utah highway 31 left Fairview to the east, so I was trying to pick out how the road would climb into those mountains.

I found UT31 and turned east out of town and immediately started the climb into a canyon. Most of the curves were in the 30-40mph range with occasional views back down the valley into Fairview. I hadn’t realized on paper how high this road got, as the trees started to thin out and yield to alpine fields. When I reached the summit, it was over 9,600 feet and the aspen trees were either already bare or hosting a dwindling portion of grey-brown leaves. Descending down the eastern side, the road drops into a river canyon and the scenery changes. Where the western slope was all forested with little exposed rock, the western slope was yellow and grey rock and sparse brush. Quite a difference. I took a few photos up near the summit.

Down in Huntington, I turned north on UT10 towards Price. This stretch typical Utah desert and much warmer than the chill going over the pass. Coming into Price, there was yet another single-lane construction zone where we had to wait a few minutes for our turn to go through. On a 90ºF day, this would have been agony; today, it was a chance to warm up a bit.

Once through the construction, I got on US6 westbound. Yes, I know that Michigan is not west of Price, Utah, but I needed to double back a few miles to pick up US191 north to get to US40. I’d never ridden this chunk of US191 and was curious to find out why Rand McNally had it marked as being “scenic”.

US6 westbound at helper starts to look fun as it enters a deep canyon and begins to curve around. In the middle of this scenery, you encounter the junction with US191 and it curves off into a tight side canyon. It seems that you’re riding through a labyrinth since there are other side canyons branching off of this one. (Don’t look down them for too long or you’ll almost miss your entrance into the next turn.)

US191 climbs in the canyon for quite a while before finally peaking with a good view of the surrounding formations. I didn’t stop for a photo (probably should have) because I was having too much fun. For the second time today, I’m above 9,000 feet before starting down the northern side in a wider canyon. Slowly, the canyon walls get lower and lower until you pop out of the canyon just before you enter the town streets of Duchesne.

Here I turn east on US40 towards Vernal. I figured that I’d gas up in Vernal but I was fighting a slight headwind now and the range readout on the Nightowl was dropping to less confidence-inspiring numbers. I elected to stop in Roosevelt, Utah for gas and a snack. Even though it was now in the mid 60ºsF, I was still a bit chilled from the cool morning. Consequently, rather than parking and seeking shade to munch on my road food, I sought out a sunny spot and even left my jacket on to soak up the sun. I also took a moment to reserve a room for the evening.

The ride to Vernal was uneventful. I could tell I was close to Vernal when all the advertising and company names at the roadside started to take on a dinosaur theme. Vernal is the closest town to Dinosaur National Monument, and the locals leverage that advertising advantage to the hilt. Even my next turn on Waze was a right on the Stegosaurus Highway. South of Dinosaur, I too a photo or two of the eastern edge of the rock formation upheaval that yielded the bone bonanza that gave this national monument it’s name.

A rock formation north of US40 east of Dinosaur, CO.

A closeup of a rock formation north of US40 east of Dinosaur, CO.

The right turn took me southeast to Rangley, CO, where the expected rocky hills and sagebrush are spoiled a bit by a bunch of oil wells busy pumping away to fill their respective tanks. This road isn’t very technical (i.e., curvy) and that’s a good thing since the surface waves around a lot and would add challenge to high speed cornering.

At Rangley, I turned south on Colorado highway 139. This is a lonely stretch of road that crests a single mountain range on it’s way toward I70 just west of Grand Junction. It starts tame enough, but gets tighter as it climbs to the pass at ~8,200 feet. I knew there was a good view from the pass, so I was ready to stop there and take a few photos.

A panorama from Douglas Pass on CO139.

A view from Douglas Pass on CO139.

A view north from Douglas Pass on CO139.

Down the south side of the pass, there are more switch backs, some of them with a bit or road damage from falling rocks and washouts. Compared to the northern side of the pass, you practically plummet down the mountain. When the road finally starts to straighten out, it’s an exit of a wide valley into farmers fields. Passing through the town of Loma (don’t blink, you’ll miss it), you come up on the interchange with I70.

I was heading to Delta, CO for the night, so I took I70 east to Grand Junction, where I picked my way through the stoplights that clog up US50 in Grand Junction. US50 is a four-lane to Delta, so I made good time as the sun dropped lower in the sky to the west. By the time I pulled into the motel parking lot, downtown Delta was in shadow.

After moving my overnight needs into the room, I opened my Yelp app to look for local eating establishments. The Stockyards Cafe looked promising and would be open for another 50 minutes. It was only five blocks away, but I wanted to get there faster, so I rode down the street.

The Stockyards Cafe was nowhere to be found.

In fact, I drove right past it because it was completely dark with no lit sign. While Yelp stated that this place would be open until 8pm, they apparently closed at 7pm. Luckily, there was a brightly lit sign for Pizza Hut just across the street. Pizza for dinner. Yum. (This isn’t entirely facetious; I actually like Pizza Hut pizza… occasionally.)

Waiting fo the pizza, I discovered that Pizza Hut’s WiFi was slower than the local cell network. I checked my data usage for the month and found I wasn’t being too bad this month. I turned off WiFi and uploaded the day’s photos using the cell network.

The pizza arrived. I dined.

I rolled back to the motel in complete darkness; not just the skies but most of the businesses as well. For weeknights during the off season, they roll up the streets in Delta at about 8pm.

The tentative plan is to ride over the the Black Canyon of the Gunnison, ride past the Blue Mesa Reservoir (again, we rode past it back on Day 3), and roll down through the San Juan range to South Fork. Then I’ll wind my way back towards Denver in preparation for the coming slab blast home.