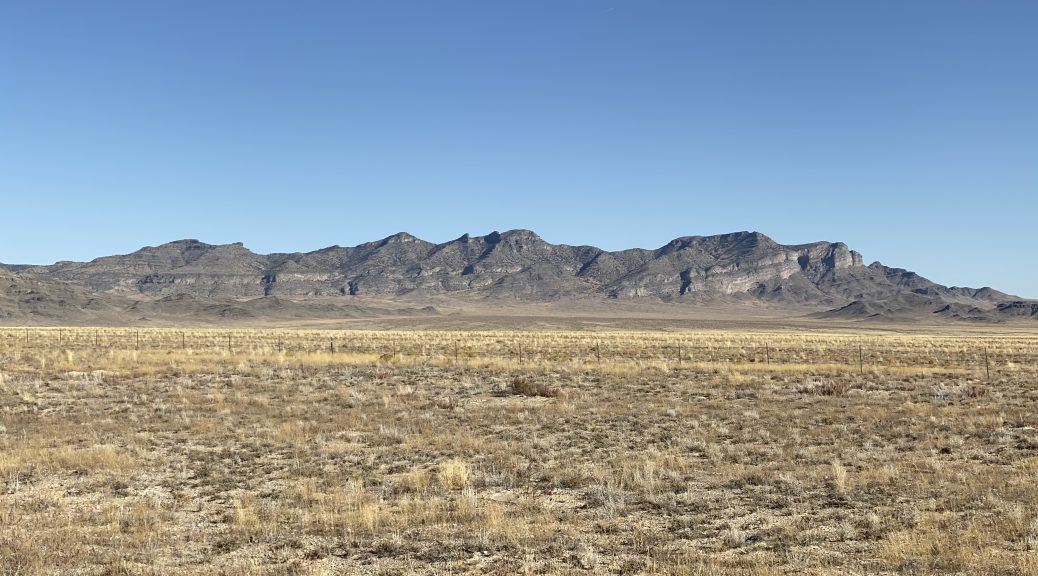 Traversing the loneliest road in America, on a Monday, in October.

I woke up, looked out the window and saw the promise of a nice riding day: sunny and cloudless blue skies. Then I checked the forecast on my iPhone, which reported a local current temperature of 38ºF (3.3ºC).

Checking a few points down the road it looked like the mid-afternoon highs were anywhere from the high 50ºsF to low 70ºsF. Still, I’d have to bundle up a bit and add the heated gear to survive the morning without going hypothermic.

I had a few work-related emails that required my attention, even on vacation. That held me up enough that I missed the complimentary breakfast. This didn’t break my heart too much since I’d been fed plenty at Jerry’s Restaurant the evening before.

I showered, packed up, bundled up, and gassed up. Checking the distance to Ely against my estimated miles to empty found that I’d make Ely by two (2) miles. Tempting, but US50 in Nevada is not a road to run dry on. I mentally planned a gas stop in Eureka and got my butt down the road, eastbound on US50.

The scenery on US50 is a repeating pattern. Long stretches of largely straight and level roads on the high desert plateau, followed by shorter stretches through a low mountain pass. Then there’s another stretch on the desert pan and another mountain pass. Lather. Rinse. Repeat.

This scenery tends to incite a love/hate proposition with riders that are new to it. They either embrace the magnificent desolation and horizon-to-horizon vistas, or they get bored with it and can’t wait for it to be over. Those in the latter group never ride it again, somehow finding the four-lane commotion of I80 and more tolerable alternative. Those in the prior group ride this stretch over and over, like me.

While the loneliest road in America isn’t as lonely as it used to be, I still encountered (maybe) two cars every 10 miles (both directions of travel). The heated gear was keeping my from becoming a popsicle and I went long distances, even with passes around other cars, without needing to cancel the Nightowl’s cruise control.

Nearing Austin, I began to see temporary road signs warning of a one-lane construction zone that could incur 30-minute delays. As I neared the flagman, still over a mile away, I could see a bunched up set of vehicles starting to follow the pilot car into the zone. I ignored the 55mph zone and tried to get in on this “cycle” of traffic.

Missed it by that much.

The flagman stopped traffic one car in front of me. The driver in front of me asked the flagman (actually flag woman) to wake him up because we was going to nap away the delay. I got off the bike and took a few photos while other vehicles slowly accumulated over the next 10 minutes.

My view down the road at a 30-minute pilot car zone.

I struck up a conversation with the couple in the pickup behind me. They were RVers and were hauling a new golf cart back to their trailer on the other side of the state. The man had ridden earlier in life so we had much to talk about. This was good for killing the rest of the delay time, for the pilot car and oncoming group of westbound traffic was (seemingly) soon in view.

The pilot car swung around and passed the line of eastbound cars to enter the one-lane zone. Naturally, the flag woman had forgotten to wake up the driver in car #1, so the pilot car proceeded without us. The flag woman trotted to the first car and wildly motioned for us to go around him. This left me first in line. Karma gives back.

The construction zone itself wasn’t too exciting, just a grind and repave job that was working on the westbound lane.

Over another pass or two and the next climb starts with a ride through the town of Eureka. This is a nice little town with a slightly developed old school downtown where half of the buildings have keystones with dates in the mid 1800s. The other half of the buildings are either modern or empty shells; an interesting mix.

Eureka Nevada bourbon distillery? I may have to check this out.

I stopped at the Chevron for fuel and parked the bike in the sun (still chilly); it was 12:30pm and time for a quite bite of road food.

Perusing the aisles in the small food shop found the basics: munchies, candy, soda, beer. I carefully selected a bag of BBQ potato chips, a package of strawberry PopTarts, and a Diet Coke to wash it down.

While I ate, the couple with the golf-cart-carrying pickup pulled up. We continued our conversation from 40 minutes ago like it hadn’t been interrupted. They left before me and commented that they’d probably see me later when I passed them again.

I finished my road-food lunch and got the Nightowl headed east again. More desert pan, more low passes, and Ely crept into view. For the first time in forever, I passed through Ely with not stop: not for gas, food, lodging, anything. I just wandered through and continued on knowing that I should make the next services in Delta, Utah with around 30 miles of gas still in the Nightowl’s tank.

At Ely, US50 turns south for a while to find a convenient spot to cross the mountains to the east, then it turns back north by a large wind farm. The barely spinning wind turbines were lucky for me since it meant not much wind to further chill the day. I still had the heated gear on a low setting since the temps were now in the 60ºsF.

Near the Nevada/Utah border, I waved to the south at Great Basin National Park, a nice scenic part that nobody goes to.

Now in Utah, I just lost an hour as I passed into the Mountain time zone. It was late afternoon already and the sun was lower in the sky and doing a good job of casting the west-facing mountain ranges in a increasingly orange glow. I stopped on the shoulder a few times to catch a few shots, feeling guilty for not catching the pretty valley with the wind farm.

Mountains south of US50 just east of the Nevada/Utah border.

Mountains north of US50 just east of the Nevada/Utah border.

There’s a salt flat east of Delta that I occasionally visit because you can ride out on it and take cool vanity shots of your bike. This year the normally well-baked and uniform salt flat looked mottled and chewed up. They’ve obviously had more rain than usual and, not wanting to get the Nightowl stuck in mud, I refrained from a ride out on the flat.

I’ve often stopped in Delta, Utah for the night. I have a favorite NAS strip motel that has very reasonable rates. This time, however, I wanted to get a bit further along. I still stopped for gas (23 miles still in the tank), and waved goodbye to US50, opting for US6 east.

I turned right of of US6 onto UT132 through Leamington and hitting Nephi at the I15. This stretch of road follows a Union Pacific branch line that services a big cement plant located in the middle of yet another low mountain pass. Still, it’s a nice break from the long desert pan on either side of Delta.

Side note: Why did Delta get established where it did? There’s nothing out there and it’s nowhere near a river or even seasonal runoff from a nearby mountain range. (Shrug) I don’t know.

At Nephi, I crossed under I15 and continued east around another mountain range, one that was tall enough to remove my last warming sunlight for the day. In the last 30 miles of the day, the temperature dropped all the way to 48ºF. After that 30 miles, I entered the charming little berg of Mount Pleasant, Utah. Truth be told, I’m only guessing that it’s charming, since it was only twilight and I didn’t see much other than my hotel and the Mexican restaurant across the parking lot. (How do I keep finding this combination?)

The dinner was chicken fajitas and it was big enough to serve three starving Marines. I had plenty while the Detroit Lions game played on the TV over my shoulder. I figured that if I ignored the game, my hometown Lions wouldn’t squander their lead to the Green Bay Packers. They did anyway.

The Horseshoe Mountain Motel turned out to be a nice find. The rooms aren’t the cheapest, but rooms are clean, well appointed with fridge and microwave, and they include nice rough-hewn log furniture.

Weave through more Utah mountain ranges, pay a visit to Dinosaur National Monument, and weave my way towards southern Colorado. How far will I get? Good question.