One of the annual netscum gatherings that I attend is the annual MAMMARY run. (No, it has very little to do with female breasts; search this blog for MAMMARY label for a definition.) Since the gathering is centered in the Chesapeake Bay area southeast of Washington DC, which isn’t that great a distance from the home garage in Michigan, I tend to minimize the vacation days expended to get there. That means the route to/from MAMMARY usually consists the necessary evil of turnpikes. 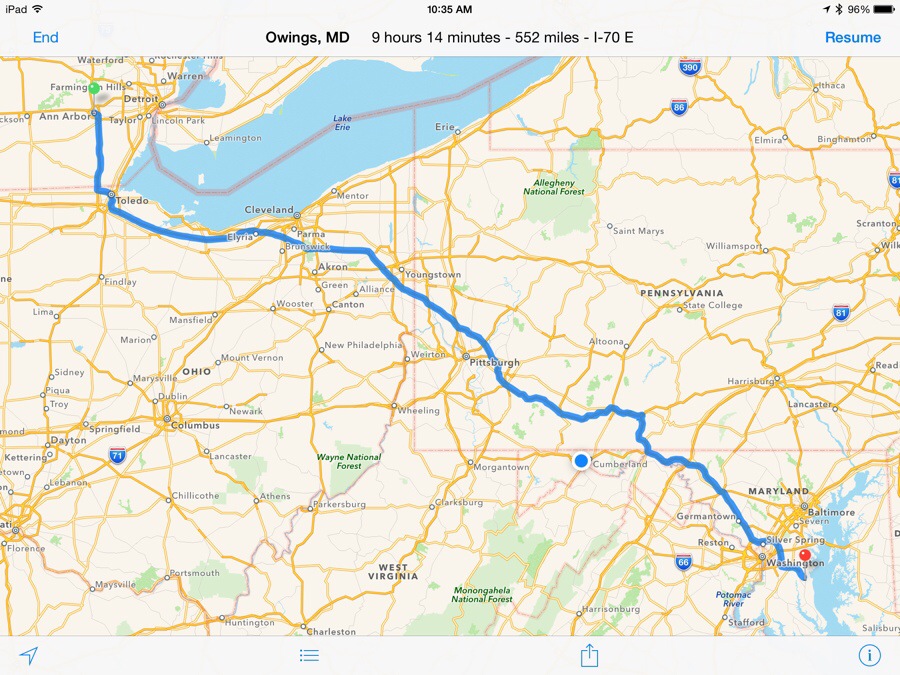 The Ohio and Pennsylvania turnpikes are not necessarily evil. They provide the fastest and most direct route from the upper midwest to the middle atlantic metropoli. The evil part is that they are toll roads and, with all that extra money coming in, have a tendency to be constantly under construction for one reason or another. For motorcyclists, an additional evil presents itself when the rainclouds molest your day. Digging for toll money through multiple layers of raingear and leathers, with raingloves on, is a special kind of obnoxiousness that I wouldn’t wish upon the fleas on my worst enemy’s dog.

The Ohio turnpike is, in a word, boring. Aside from a few nice river valleys (Cuyahoga, especially), it’s flat, straight, and… …oops, I nodded off there for a second just thinking about it. (In terms of civil engineered valium, not as bad as the west end of the Ontario 401, but close… very close.)

The Pennsylvania turnpike (Penna turnpike for short) has a much different character since the scenery it passes through is much more interesting. As much as I prefer a nice non-congested two-lane highway, I like the occasional trip on the Penna turnpike. The route I usually travel includes a few nice mountain passes, a beautiful river crossing northeast of Pittsburgh, and one long tunnel. So usually welcome the chance to ride it.

Karen had the great idea of taking an additional day off before the run so we wouldn’t need to jump on the bike after a full day’s work and ride until midnight to get down the road. The motivation for this lunatic behavior is that it leaves us with a light Friday ride to get to the festivities and start socializing (read: drinking) with our friends.

So, this year we found ourselves with a unique opportunity: we could sleep in a bit (after getting Jessica to school), leave whenever, and possibly choose a slightly longer route that would eliminate the turnpikes from our path.

I’ve got a favorite route down through Ohio that cuts a diagonal towards the southeast corner (usually around Marietta). We leveraged this route as far as Zanesville and then turned east along I70 towards Wheeling, WV. We would then take US40 down to I68 and take that east until it merges back into I70 (post toll road) in Maryland. (I’ll post a map after I get a track from my iPhone.)

This all sounds great on paper, and with a few exceptions, worked out wonderfully.

The first glitch involved a Ohio State Trooper. Ohio State Police cars are a unimpressive grey with pale orange markings on them. In other words, they blend into the rest of traffic all too well. We passed one just west of Mt. Gilead (not far from the site of my 2001 close encounter with a pickup truck) and he immediately whipped around to give chase.

I pulled to the side and flipped up the chin bar on my modular helmet so he could have a face to talk to. After a few pass-the-niceties questions, he announced that I was going 68 in a 55 and asked if I was aware of this. I pointed to the speedometer on the Cruiser and lamented that the combination of a ancient speedo and the vibrations of a rigid-mounted Harley Softail resulted in a bouncy speedo that didn’t always reflect reality. I stated that I was using the tachometer more than the speedo for dead reckoning my rate of travel.

At this point, a curious thing happened. The trooper immediately became more interested in the bike (how old, am I the original owner, what modifications, etc.) and less interested in my traffic violation. He then said that he was going to give us a break and warned us that the rest of the weekend would be a law-enforcement-officer feeding frenzy of even the most slightly offending vehicles. He was a very pleasant and helpful individual, and I’m not just saying that because he let me off.

The trip continued down through the rolling valleys of southeast Ohio, enjoying the well watered greenery (it’s been a wet spring) and dodging the occasional horse buggy (Amish country).

We stopped at a rest area east of Wheeling to add a layer of clothing since the sun was setting and the high-sixties temperatures were making us a bit chilly without the sun on our leathers.

By the time we exited I70 onto US40, it was dark and, in retrospect, I shouldn’t have traversed this portion of the trip in the dark. It’s not too curvy or congested. The problem is the faded lines on the road and the lack of street lights. Now, I don’t expect there to be street lights out in the wilderness; in fact I prefer them to not be there. The faded lines and no railings/reflectors made it difficult to keep up a decent pace.

After a very thorough tour of Unionville looking for an open gas station after 10pm on a weeknight, we continued on to I68 and enjoyed a nice descent out of the mountains and into Cumberland, where a Super 8 hotel marked the end of the day’s journey.

As a demonstration of “how to avoid the turnpike”, this worked out fairly well. We got further down the road than we usually would and that leaves an even shorter day on Friday (time enough to dabble in other distractions, like writing this post). In hindsight, we should have left home earlier so we wouldn’t have to traverse the US40 portion in the dark. Otherwise, it was a thoroughly enjoyable ride.