Back in the mid-nineties, I began to outgrow the performance capabilities of my 1992 Harley-Davidson Heritage Softail (the Cruiser). (Sport bike riders: shut the hell up; I know Evolution Harleys weren’t high-performance to begin with.) In addition to several suspension and drivetrain upgrades, I spent a fair amount of time and money to pry more power out of the venerable Evolution power plant.

Since my riding style was more about extended coast-to-coast tours and less about local tavern-to-tavern putts, I had to balance increased performance with reliability. After all, I didn’t want to find myself stranded on the west slope of Lolo Pass when my asphalt-ripping 150hp engine hit its “time-to-rebuild” expiration date (potato, potato, crunch, grind, grind, grind…). After exhaustive research, which I won’t detail here, I settled upon the figure of 1hp/ci or one horsepower per cubic inch of engine displacement. I theorized that this would give me nice seat-of-the-pants performance without the engine having to be rebuilt every 20,000 miles.

If that figure seems a bit low, remember the platform I was modifying. The Harley Evolution engine in the Cruiser was an 82ci (1340cc) air-cooled 45º v-twin and it didn’t have a lot of extra meat in the cases and cylinders for outrageous big-bore projects.

Point of Trivia: The Cruiser’s big-bore upgrade, complete with performance heads and a 0.600″ lift cam, lasted almost 80,000 miles before the cam galled and dropped a flake into the oil pump. During that 80k mile span, I didn’t have to open the engine once. Not bad for a 102hp Evo engine.

When I finally decided to graduate to a motorcycle that could corner well, my brand loyalty kept me in the Harley fold and I ended up with a 2006 Harley-Davidson VRSCR StreetRod. 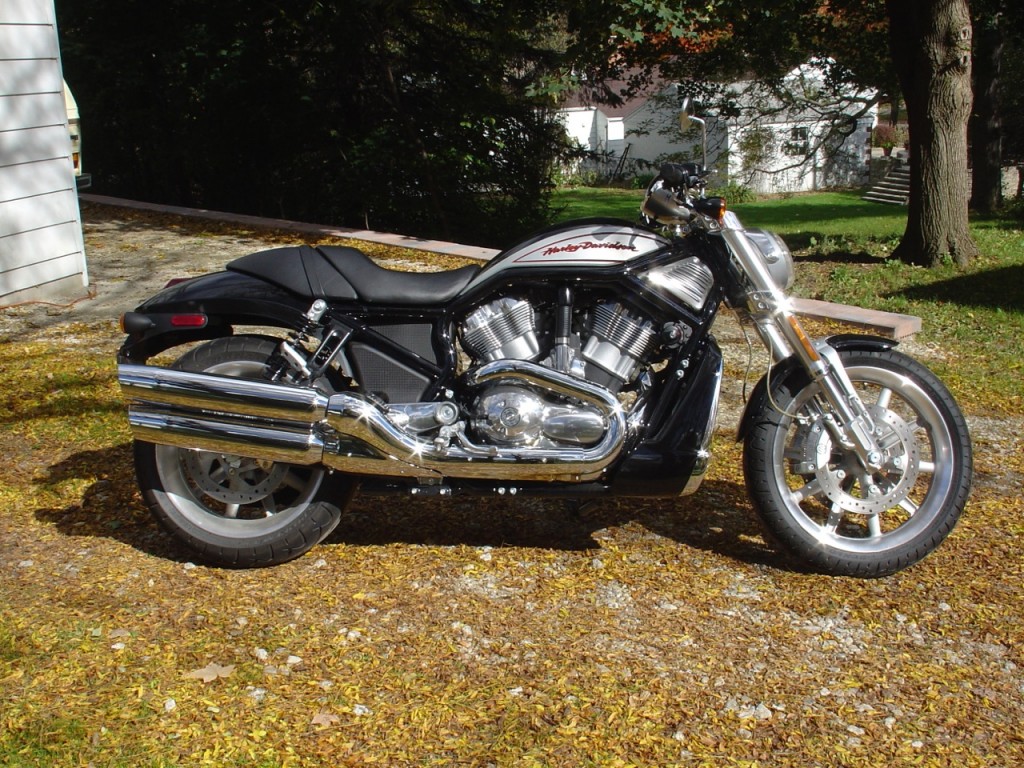 From a engine performance standpoint, this was a significantly different animal. At first glance, it was still a v-twin, but there were 60° between the cylinders instead of 45°. More importantly, there was a radiator bolted to the downtubes.

Within the world of Harley devotees , opinions on water cooling are felt passionately and argued with a vehemence usually reserved for defending one’s religion. There is, however, no arguing the point that you can get more horsepower-per-your-favorite-unit-of-displacement out of a water-cooled engine. Consider the comparison below:

While the Cruiser’s engine displacement had been increased from 82ci to 97ci, the Vector’s motor has not been significantly altered. It should be no surprise that the Revolution out-performs the modified Evo in spite of the fact that it is 28ci smaller in displacement. There’s your water cooling at work. Simply stated, you can run at a higher static compression, higher RPMs, and tighter tolerances with a water-cooled engine. The result is a 50% increase in power per cubic inch and the ability to use that increased power more readily. For example, I can push the Cruiser hard for a few consecutive days (e.g., 1,500 miles at ~80mph) and it will feel “tired” and need to have it’s oil tank topped off. Conversely, last summer I rode the Vector from Charleston, South Carolina to Tacoma, Washington in four days; it used negligible oil and felt like it was just warming up.

The table includes the same data points for two of the heavier hitters in today’s realm of ridiculously high-powered motorcycles: the recent BMW inline six and the legendary Suzuki Hayabusa.

The Bimmer makes it’s power the old fashioned way: more displacement. While the BMW is not making quite as much power-per-cubic-inch as the Vector, the added displacement and four additional cylinders make it a significantly faster ride. Given that low hp/ci number, I’d have to guess that the motor is understressed and will prove to be rather reliable. Reliability would be a significant bonus, considering it accelerates like a jack rabbit with its ass dipped in flaming napalm.

The Hayabusa motor is, well, The Shit. This power plant, ironically, has the same 82ci displacement as the Cruiser before it was increased via the big bore kit. Yes, it has the advantages of water-cooling and twice as many cylinders, but Suzuki engineers somehow manage to extract double the horses per cubic inch. The result is a machine that doesn’t simply go fast, it owns speed. It’s as if speed were a piece of property and the Hayabusa had its flamboyant Kanji signature on the deed. Based on the gaudy hp/ci number, one would assume that the engine is overstressed and would be unreliable but I haven’t heard many complaints about this platform.

Here is where I finally get to the point of this meandering article.

I live and work in the Detroit area and, consequently, have a certain vested interest in the automotive industry. As a result, I follow the press releases stemming from the annual North American Auto Show. I find it a good indicator for the technology that is emerging in the automotive market; technology that inevitably trickles it way down into vehicles that every-day-slobs like me can afford. This same technology eventually finds its way into motorcycles too.

I’ve always been a fan of the Ford GT40 endurance race car that had such success back in the late 1960s. So when Ford announced an updated incarnation of that platform, my curiosity was piqued.  Aside from the impressive use of carbon fiber, what caught my attention in the announcement was that they were expecting to see over 600 hp from a 3.5L engine. That engine, admittedly, is tied to twin turbochargers, but that’s a hell of a lot of thrust from a relatively small plant (see the numbers in the last row of the table above).

My mind immediately started to fantasize about a future motorcycle that leveraged this technology to extract nearly 3hp from each cubic inch of displacement. Such a bike would be over 30% more powerful than the Hayabusa. Thoughts like this make me giddy.

Unfortunately, we may never see such a powerful bike… at least not one powered by gasoline. The advancements in electric vehicle drivetrains, batteries, and control systems will soon make them quite suitable for everything from a the morning commute to a family vacation. These vehicles aren’t exactly golf carts when it comes to performance. Tesla has already proven that an electric vehicle can provide excellent performance without needing to be recharged every 20 miles. When Zero Motorcycles or Harley-Davidson (project LiveWire)  debuts an electric motorcycle that can go 500+ miles, two-up, fully loaded, for days on end (charging overnight), I’ll definitely be interested.

So, the point to all this? No matter what the technology involved, the future of high-performance motorcycles looks very bright indeed.