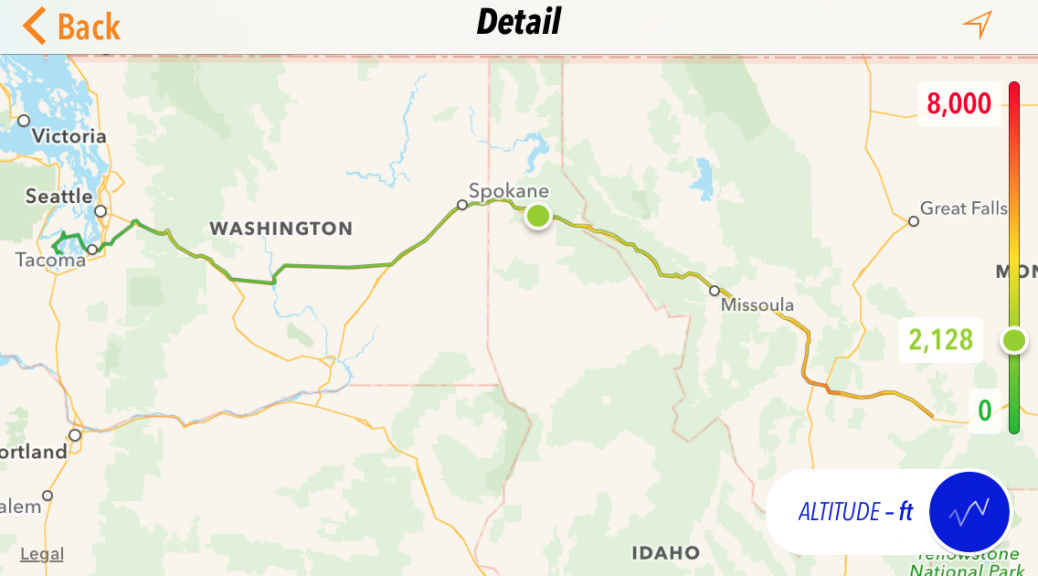 After two days of resting, hanging out with good friends, doing some electrical work (not on the Nightowl), and eating great food, it was time to head back east. Unfortunately, this leg of the journey would not be so leisurely as the one coming out.

The Dutchman (who shall rename nameless) has his party every year. Every two years, Len and Pauline have their South Carolina Under the Moon (SCUM) gathering, and it is always on a consecutive weekend relative to the ParTay on the island.

Consequently, so attend both, I need to ride from Puget Sound to South Carolina with divine purpose.

Note: In some past years, the order of these destinations was reversed.

Usually, Karen rides to SCUM and flies out to the ParTay. So far, this has never required me to do anything other than a direct route from the ParTay to SC (or vice-versa). This year Karen had to miss the party and want (really wants) to go to SCUM.

So, the icing on the cake is that I have to swing by the house in Ann Arbor to pick up Karen before I can head south.

And during that few-hour layover in Ann Arbor, I need to do a 12K mile service on the Nightowl.

Such is my challenge when I left the island this morning.

Note: By necessity, my postings for the next few days will be shorter and probably without photographic evidence. I simply don’t have the time.

I need to cover a minimum of 600 miles (966km) every day for the next four days, and that will just get me to Ann Arbor. (I really want to do a few hundred miles towards SCUM that night.) Any miles I go above and beyond that gives me more layover time in Ann Arbor to work on the bike, kiss my wife, etc.

After two days of hot sun and serious heat, this morning was cool with a light overcast. After packing up the campsite and loading the bike, I donned my camp flannel as an extra layer. I still wore the perf gloves instead of the heavy ones because this time I would remember that the Nightowl has heated grips (roll eyes).

After saying goodbye to my friends and illustrious hosts, I wound my way over the Tacoma Narrows towards WA18 and finally I90 up Snoqualmie Pass. Somehow the weather coincided with the pass perfectly and the cloud cover disappeared as I crested Snoqualmie.

By the time I stopped for gas at Vantage, WA (just short of the river), it was (surprise) getting hot, like around 95ºF hot (35ºC). Naturally, the heated grips turned off and the flannel was taken off.

I endured this heat all the way past Coeur d’Alene, ID and up into the first range of mountains. After that it cooled a little but not much.

The trip of Lookout Pass is usually a fun one, taking the sweeping corners at full highway speed, but this time it was one lane in both directions. This meant we got to drive just as fast as the slowest truck.

I was getting a little low on gas and would not reach Missoula, MT on the fuel I had left. Luckily, the handy community of St. Regis, MT had a Conoco station. I used this stop as an opportunity to hang out in the shade for a moment and replenish my body.

On hot days, I like to consume things that put back the fluids, electrolytes, and salt that one loses when sweating bullets because you’re wrapped in black leather out in the hot sun. That, for me, means Gatorade and Doritos.

There was a lot of smoke in the air west of I90 from Missoula to Butte. I shudder to think how much fire there is to create such a big cloud of smoke. That same smoke was going to give me an earlier sunset, which would mean that deer-festival would start early. Luckily, I passed out from the smoke cloud and back into the last hour of sunlight just before I got to Butte.

I did the Homestake Pass east of Butte in the last few rays of the setting sun and had an easy last 77 miles (124km) to get to Bozeman, MT, which was my desired destination for the day (at least it was something to shoot for).

One thought on “The Mad Dash Begins”