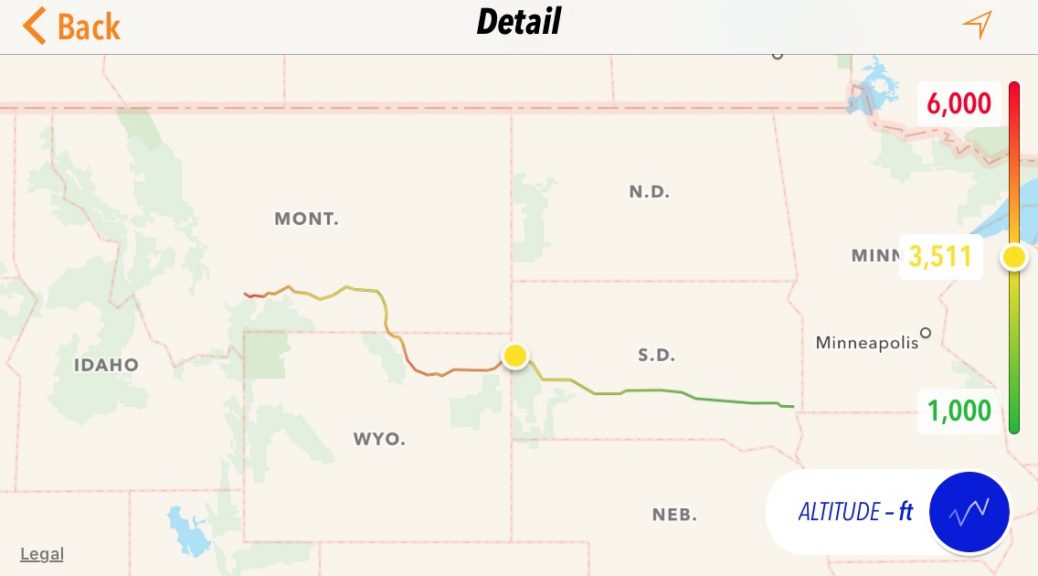 As described in yesterday’s post, I’m trying to get home in record time so Karen and I can ride down to the SCUM run in South Carolina next weekend. Yesterday’s big challenge was heat. Today added another.

I started with blue skies and cool temperatures in Bozeman, MT. Unfortunately, I had to take the time to post a story for the previous day before I left (to satisfy the curiosity of my voracious readers). I finally left the parking lot just before 10am.

The path today, much like yesterday, would be to get on I90 and stay on it until I really did it want to ride anymore.

The first stretch of the ride to Billings is very nice. If you have to find yourself on a superslab, I90 from Butte to Billings is far better than most. Rolling landscape, much of it forested, along river valleys and through the occasional pass. All this with the mountain ranges just off to the south of you. It was a rather enjoyable morning.

The cold front that had cooled down the high temperatures for the start of the previous day had passed me overnight. Unfortunately, it’s not moving very fast, so I caught the edge of it just south of Billings, MT. Over the course of about 30 minutes, the ambient temperature went from 78°F (26°C) to 94°F (34°C). Stupid me, I hadn’t replenished my water pack during my gas stop in Billings.

Note: I stopped for gas in Billings even though I had about 50 miles (80km) left in the tank. This was to avoid running out of gas along this stretch like I had on the Vector the previous year.

By the time I turned east at Buffalo, WY, I was out of water and wanting to at least reach Gillette, WY before I stopped for gas. As I rode up the slope east of Buffalo, I looked over my shoulder to take one last look at the mountains through the smoky haze. I won’t see them again until next year.

When I reached Gillette, I had 7 miles (11km) more than I needed to push on to Moorcroft, so (naturally) I kept riding to Moorcroft. There I consumed my traditional bag of chips and jug of Gatorade to try and rehydrate and put back some of the salt I was sweating out.

The ride on to the Black Hills went fairly quickly and only got hotter. Still the heat didn’t raise enough haze to prevent me from seeing Devil’s Tower from the one high spot on I90 where that is possible.

When I checked the ambient temperature just north of Rapid City, the bike read 98.6°F (37°C). If that temperature sounds familiar, it’s because that’s normal human body temperature. Consequently, the air wasn’t cooling me at all. It only got worse in a swale west of Wall, SD, where the temp peaked at 103°F (39.4°C).

I fueled up again in Murdo, SD just before sunset. There isn’t as big a deer population out here so I already knew I was going to ride well into the night.

Then the wind started.

It came from the south and crossed my nearly due-east path like the four riders of the apocolypse. The winds blew at an unsteady rate, averaging  25mph and gusting to 45mph (40kph gusting to 72kph).

Suddenly the ride was no longer fun.

It wasn’t just the strong and random cross wind that bothered me. It was exacerbated by the fact that I was already riding 85mph (137kph). To make matters really unbearable, everybody else was riding that fast to, so passing vehicles meant getting buffeted by their wake of turbulence.

This is when I really hate those drivers who set their cruise control at your-speed-plus-1 and creep past you over course of two or three miles. All the while, you’re frantically waving them to find the accelerator and get their ass on past you. I slowed down several times just to get out of the wake of a slow-passing vehicle.

Today, I officially award the Ghost’s Medal for Pissing Off Motorists for No Damn Reason to the great state of South Dakota. The award is given for having one lane closed for 20 miles (32km) with no evidence of any construction activity whatsoever. Way to go, SD.

One other news flash: the bite valve on my Camelbak water pack went AWOL somewhere before Mitchell, SD, which (of course) meant my water pack drained all over everything. I can stop the flow by kinking the hose, but I’ll have to find a replacement sometime tomorrow.

After one last gas stop in Mitchell, SD, I managed to pull off the road in Sioux Falls, SD. I got a room for the night and located a Subway sandwich shop that was still open after 11pm.

The totals for the day:

During this leg of the journey, I had heat on day one and worse heat combined with nasty cross winds on day two.

I’m expecting brimstone for day three… or at least locusts.