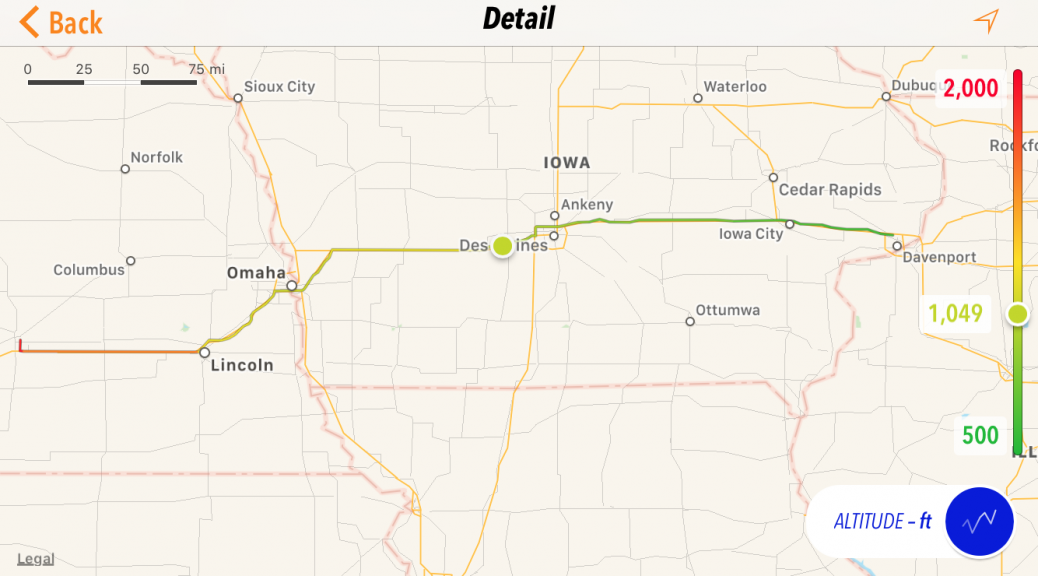 Today I would attempt to perform some scheduled maintenance on the Nightowl and revisit a good BBQ place from a different trip a few years ago.

I was wondering just how bad it would be to perform the 12k mile service on the Nightowl away from the considerable comforts of my garage back home. Today would be the day I would find out.

The other goal of the day would be to ride across Iowa and stop for the night in Davenport, IA. This goal served two very different purposes:

I did some research before I left the hotel and had found places in close proximity where I should be able to obtain the necessary fluids to get the service done. That place was just across the Nebraska/Iowa border in Council Bluffs, IA.

The ride to Council Bluffs from Grand Island was not very exciting, and I covered the actual 12k service adventure in another post.

With the service out of the way, the motto of the day turned into: Just ride, baby. The service had eaten up a bit more time than I wanted, so I had to crank out the miles if I was going to get to the Machine Shed before closing time (presumably 9pm).

I set the cruise control at a reasonable pace, turned on some music from one of the playlists on my iPhone, put my right foot out on the highway peg, left hand in my lap, and rolled.

The undulating farmland of western Iowa passed by quickly in the afternoon sun. By the time I reached Des Moines, it was towards the end of rush hour and the extra congestion didn’t slow me down much. I stopped for gas just east of Des Moines and figured that would get me the rest of the way to Davenport.

It turns out I was right.

The sun was just about to set as I pulled off I80 towards my chosen hotel for the evening: the Days Inn in Davenport. This hotel is no great shakes; not one but maybe two notches above scuzzy. The air conditioner rattles badly. The door dividing my room from the adjoining one was made out of Kleenex and spit, so the never-ending TV watching in that room was clearly discernible late into the evening. The bed in that room was a queen lined up off-center under the king-sized headboard that was screwed to the wall. The bed itself was a Sleep Number bed, but the display on the bed’s controller didn’t work, so you coudn’t tell if pushing any of the buttons was doing anything. I spite of these limitations, it was clean, I got a decent night’s sleep, and a shower the next morning. It served it’s purpose.

Technically, that purpose was to get me within walking distance from my chosen dinner venue: the Machine Shed.

I walked into the Machine Shed at about 8:45pm. Good news: they’re open until 10pm so it wouldn’t be a rush to get me served at the last minute.

The first order of business was ordering a Bloody Mary, which came with not one but two slabs of cooked bacon sticking out of it. While I chatted with the waitress, I pulled up a photo from Karen and my wedding showing how we also had bacon Bloody Mary drinks at the wedding. She got a big kick out of that.

I selected the beef brisket sandwich for dinner, and took it easy on the preliminaries of cole slaw, cottage cheese, and cornbread. (This strategy was designed to allow room for dessert.) The brisket was very good. Not quite as smokey as the brisket served at the Par-Tay a few days ago, but still pretty damn good.

With the main dish out of the way, I ordered an apple dumpling for desert. That would be cooked apples inside a pie crust shell, covered in hot apple glaze, all under a big scoop of cinnamon ice cream.

By the time I finished all that, I was stuffed and ready to have myself rolled back to my hotel room so I could collapse. As I walked out, I noticed that I was the last customer to leave. Yes, I’ve closed the Machine Shed.

Being my own worst enemy, I did not go straight to bed when I returned to my hotel room. Instead, I played around with iMovie to see if I could assemble the videos and time-lapse videos that I took during the service into a presentable video that I could include in another post. It worked out pretty well but ate into my sleeping time.

That’s easy: get my butt home.