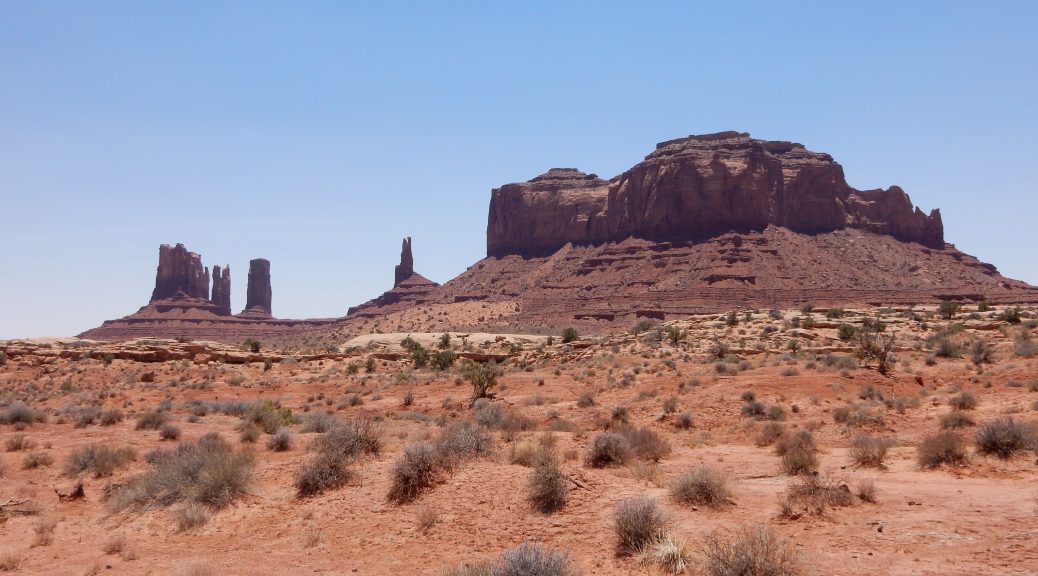 I ride through Monument Valley, up the Moki Dugway, and end up in Durango, Colorado.

The previous night I’d had horrible problems getting anything of significant heft (images, video) to upload over the motel WiFi. I tried again once I got up and a miracle occurred and uploads started working correctly. So I spent some extra time in the motel room getting photos added to yesterday’s post. I also took the time to prepare a quick set of video highlights for the day, but that was took much to ask from the WiFi (it’s never good when upload estimates are in hours instead of minutes. I gave up and decided to post yesterday’s report without a video with the promise that I’d do it later.

Unfortunately, after all this horsing around, I didn’t get on the road until 10:30am… and I’d be losing another hour when I left Arizona.

The motel let me park my bike right next to the door, so it was a quick pack. The day was yet another gorgeous, sunny, blue-skied, day. Following tradition (for this trip), it was going to be hot again, but I knew I’d be spending a fair amount of the day on high plateaus, so I shouldn’t get cooked too much.

I jumped on Arizona Highway 98 and took it southeast to US160. This is a nice stretch with plenty of interesting and colorful rock formations along the route. It’s a bit like Monument Valley Lite. It’s also lightly traveled and I made good time and had an easy time passing the few other drivers that I encountered.

US160 was another story.

There was a bunch more traffic on US160 and the drivers on it were either wanting to go much slower or much faster than I did. There was this one speed demon in a white sedan who’d caught me and was looking to pass. Before he found his chance, we both caught up to a line of vehicles, which I proceeded to pass without much trouble. He had a much harder time. In about another 20 minutes or so, he showed up in my rear view mirror again. He did succeed in passing me once, but I always passed him back when he got stuck behind other traffic and the only passing opportunities required the Nightowl’s ridiculously-high thrust-to-weight ratio.

I pulled into the McDonalds parking lot to find a long line in the drive through and a Temporarily Closed sign on the dining room door. I sat in the hot sun in the parking lot and tried to connect to the WiFi with my iPad. I was hoping that I could quickly finish uploading yesterday’s video, but it was dog slow and I packed everything up and looked for a place to eat after the in-town turn onto US163.

I didn’t find one.

The place I was targeting hadn’t survived few years since my last visit. The other establishments along the way were either closed or fast food chains. I decided to head down the road and find something later, perhaps in Mexican Hat.

Just north of Kayenta is monument valley, and I made a point to mark some of the videos from the dash cam and stopped for a few photos.

I continued riding north and then caught a couple of people taking photos back the way I’d came. I checked my rear view mirror and decided that the shot was worth taking.

Now I was getting pretty hungry and I came to the San Juan River just south of Mexican Hat, Utah. There’s a nice resort clinging to the cliffs overlooking the river and the bridge crossing the river takes a hard 90º turn right in front of the entrance of the resort. They have a cafe and the view of the river should be good, so I stopped to get lunch.

The resort was open, but the cafe wasn’t open until dinner time. Now my stomach was really rumbling.

I got back on the road and traversed the few miles to the town of Mexican Hat. There was another cafe here, and this one had a car and two bikes parked in front of it. I parked, only to have the bikers walk over and tell me the place is closed. Now there was nothing until Blanding, and I was taking the long way to get there.

The long way was to not simply continue up US163 and US191. I would be taking Utah highway 261 north and then Utah highway 95 east to reconnect with US191 just south of Blanding.

Why would I do such a thing? Two reasons:

I turned left (north) on UT261 and immediately noticed the signs warning the RV and truck drivers that they really don’t want to be on this road. The highway heads straight towards the cliff that borders a high plateau. As you get closer, you start to look for the road up the cliffside, but you can’t see it, which for some, is disconcerting.

About six miles down UT261, the pavement ends, and the real fun begins. Parked by the side of the road is the road grader permanently station here to maintain the gravel stretch up the cliff. Judging from the loose nature of the gravel and the wash boarded condition of the surface, I’d say the grader hadn’t been up the road in a while.

Luckily, the nasty switchbacks along the path are at least partially paved, which is a real godsend for bikers because here is where the loose gravel can betray you and put you on your ass.

My problem wasn’t the gravel, or the wash boarding, or the imminent drop to my death off the cliff readily available given the lack of a railing. My problem was the long first and second gear stretch uphill that was causing the Nightowl to overheat. I got about halfway up before I had to pull to the side and let the bike sit for a while to cool down. I used the time to take photos.

I got to the next photo opportunity near the top of the climb and the Nightowl had cooperated by not overheating again. This view was off a near vertical drop to the desert floor.

Having conquered the Moki Dugway again, I picked up speed heading north on the blessed pavement of UT261. The extra speed was just what the Nightowl needed, quickly shedding the heat the bringing the temperature gauge down to a less scary level.

UT261 dead-ends at UT95, which travels from Blanding to Hanksville. It’s one of my favorite roads in Utah, and this would be the first time that I neglected to travel its entire length.

I turned onto UT95 and made good time to US191 south of Blanding, making sure to mark the dash cam video for the crossing of the big rock escarpment that I wanted to capture.

I rolled into Blanding and found that I had a similar problem to what I had in Kayenta and Mexican Hat. A lot of the little diner-type places were shut down. I finally resorted to road food at a Maverick gas station and convenience store. After filling up, I searched for a shady parking spot, and had to sneak up on the sidewalk to get it.

Luckily, this qualified as higher-grade road food since they had a cook at a food counter preparing roasted hot subs and personal pizzas. I picked up a chicken and bacon sub, some Vitamin Water, and a ice cream bar. There was no indoor seating for eating, but there were two tables outside and one of them had the seats in the shade of that table’s umbrella. I sat and finally ate lunch. It was 3:30pm.

I’d decided to blow off northern New Mexico in favor of covering a few passes in Colorado that I hadn’t ridden through yet. To get to them in the coming days, I would need to stay in Colorado. Staying in Durango is always an expensive proposition since it is the main overnight spot for people traveling anywhere in the four-corners area.

But first I had to get there.

From Blanding, there’s not direct route to Durango. I chose the northern alternative, which means a ride up to Monticello before cutting west through Dolores, Colorado and the way to Mancos.

I stopped in a gas station in Mancos (in a shady spot, of course) and used the lodging apps on my iPhone to find a room for the night. The best I could do was ~$150 for a Super 8 room. It was either that or stay where I was in Mancos for $50 less. I really wanted to get some extra miles in today so I would have more time for new passes tomorrow, so I decided to eat the price difference. I reserved the room in Durango and hot back on the road.

US160 between Mancos and Durango is pretty, hilly, and full of passing lanes. Consequently, I made good time and had no trouble finding the Super 8 on the south end of town.

I checked in, unpacked, and immediately connected the iPad to WiFi and checked to see if it would upload the rest of the video for yesterday. To my relief, it started to upload at a steady pace and would complete in only about 20 minutes (no metric conversion here).

And there was much rejoicing…

I used the upload time to start the Yelp app on my iPhone to find a dinner venue. There were lots of restaurants that would be closing in the next hour, but there was one, Steamworks Brewing Company, that would be open to 11pm.

I had no trouble finding it. Bonus: I found a parking spot on the street less than a block away. Double bonus: the parking meters aren’t enforced after 6pm. Triple bonus: there was an hour wait for a table, but I was able to find the only open spot at the bar and I would be able to order dinner here.

I got an Old Fashioned and ordered a Cajun chicken sandwich with garlic mashed potatoes. While my dinner was prepared, I sipped my drink and started writing this post.

Today’s map, once again, with an elevation overlay.

I know that Page, Arizona is a little more remote than Durango, Colorado, but I was amazed at the difference in the performance of their respective WiFi networks. Both seemed to perform adequately for downloading data, but uploads in Page were anemic at best.

I’ll ride over to South Fork, take Colorado highway 149 north through two passes to Gunnison. Then I’ll do something new. I’ll ride up to Crested Butte and take the Kebler Pass road over to Colorado highway 133 and take that to Carbondale. Kebler Pass is 30 miles of gravel, but hopefully the Nightowl is up to it. (I did 75 miles of gravel on the Cruiser, so this should be cake, right?)