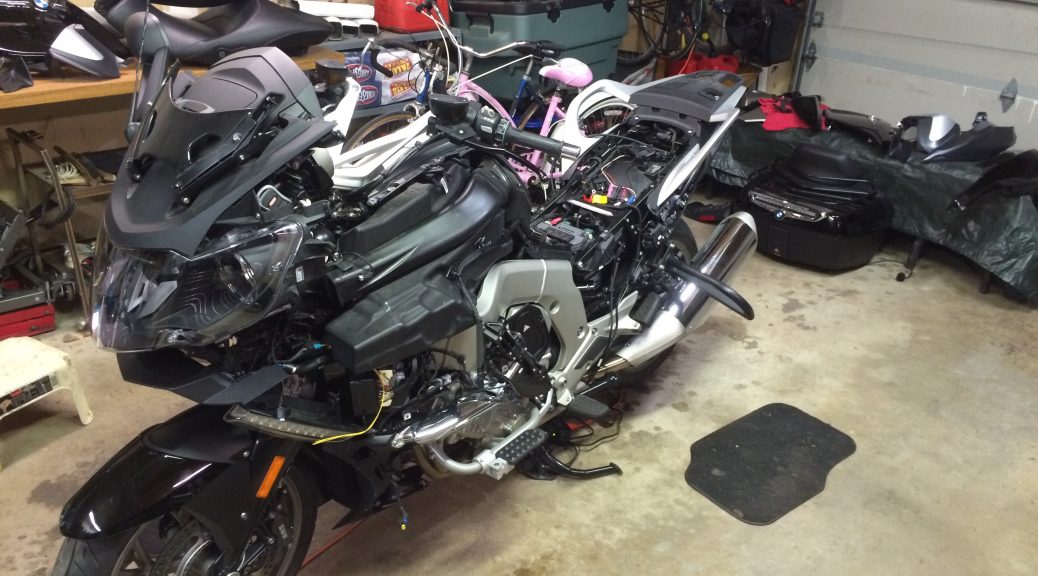 I ended last year’s riding season just short of the mileage due for the 18k miles service interval. Consequently, I needed to get this most demanding of the scheduled service tasks out of the way before the start of the busy 2019 riding season.

For those unfamiliar with the BMW K1600 preventative maintenance schedule, it goes something like this:

In this specific case, the stars aligned such that I need to perform all three at the same time. Hoo-rah.

The valve lash check is a bit tedious since you have to pull off everything on the bike from the engine forward to (but not including) the front wheel. This includes lots of body panels (Tupperware) and the radiator. When you finally get the head cover off and can get to the cams/tappets, you have the joyous tedium of:

On most motorcycle engines, this isn’t so bad. A lot of bikes, like the Cruiser and the Vector, have two (2) cylinders. Other bikes demand a bit more attention because they have three (3) or four (4) cylinders.

The Nightowl has six (6) cylinders.

Do the math. That’s 24 individual valve lash checks, all carefully recorded on a form available from the BMW service manual.

Yes, I’m bitching and moaning, but it’s really not that bad, just tedious (I think I’ve use three variants of this word in this post already).

Interesting Tidbits (to me) from this Service

And While I’m There…

I decided to make a change to my stereo configuration. Last season I ran the BoVee Tune2Air down in the right fairing storage compartment. With the iPhone that it connected to up in the dash (where the BMW Nav unit would usually go), the Bluetooth communication was a bit spotty and would occasionally cause errors, especially when browsing a long playlist (several thousand songs). I elected to run extension USB and 3.5mm stereo cables up the to upper dash so the Tune2Air could be closer to the iPhone. This meant stripping all the Tupperware off the top of the dash, but that’s not too much work.

Note: The trial and error challenges of getting the right connections, power, and quality of signal between the Nightowl’s stereo, the iPhone, my Sena 20S headset, and Karen’s Sena 20S headset, is a long sordid tale that I really should post sometime. Stay tuned.

Finally, all that missing Tupperware exposed the on-board garage door opener remote, which is wired to a module to engage when I pulse the brights two times. The remote itself is still battery powered, so I took the opportunity to replace the battery.

There, good to go… until I need to replace the tires before this years MAMMARY run.

Disclaimer: The photo is from a previous service. I could have posted without it, but you can’t get anybody to read crap these days without at least one photo to look at.