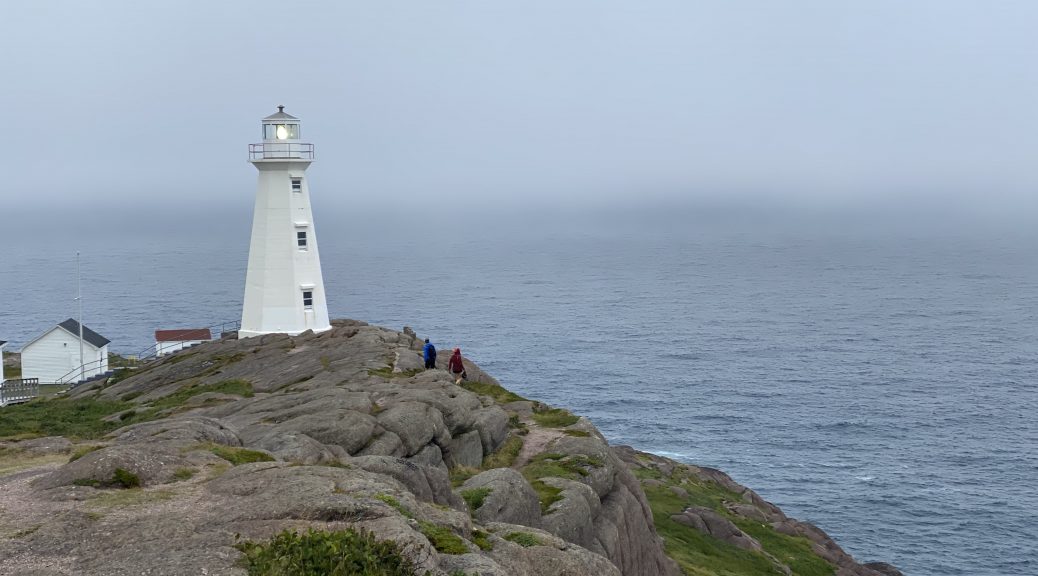 Disembark the ferry and ride to St. Johns, with possible side trips to Cape Spear and Cape St. Francis.

When we’d laid down to sleep a bit, we didn’t set an alarm, thinking we’d only nap for a while and get up again later.

We woke up just after 8am and had only started getting dressed and talking about the possibility of breakfast when an the announcement tones sounded and a voice said that we’d be docking in 45 minutes.

Nearly 12 hours of sleep… on not exactly glassy smooth seas… not bad.

I ventured out of the room to look outside and, if I’m lucky, get a cell signal so I could check weather (no WiFi on the ship). Outside, there was no rain and it looked quite pleasant, not sunny and 75ºF, but pleasant.

Back in the room, I reported the weather conditions to Chuck and we packed our gear. Soon enough, it was time to venture down to our parking deck, where we would extract our motorcycles from their ship-board bondage outfits. With bikes released and packed with gear. We simply waited for the all-clear to ride down the ramp.

Eventually, we were prompted to start our engines and our row of bikes and quad-runners made their way down the ramp and back onto solid ground.

There was a thin veil of cloud cover above us as we rode away from the harbor. It was almost sunny. The temps were only in the mid 60ºF range, but nearly anything was better than rain.

From my shipboard search for cell signal, I’d been able to see the forecast: a front was coming through this afternoon and would give all of eastern Newfoundland a decent bath. Consequently, whatever we wanted to see/do today, needed to happen before 2pm. Lucky for us, we were less than 90 minutes from our hotel in St. Johns and had left the ship eight (8) minutes before our scheduled arrival time.

At first blush, the landscape of Newfoundland looks similar to Maine back in the United States. Lots of forest over a rolling landscape. Within 20 miles of travel, you begin to notice the differences. The forests here are a little more sparse, like they are when you near the tree line. The ground cover is more rocky here; rock outcroppings seem to be scattered nearly everywhere. There are lots inland lakes, which locally seem to be referred to as ponds.

About 20 miles away from the ferry, we finally broke away from the congestion caused by the ferry traffic and could keep up a decent pace. Soon enough, we were turning east on Trans Canada 1 towards St. Johns.

The GPS did a good job of routing us through the St. Johns outskirts and directly to the parking lot for our hotel. We checked in, unloaded, and immediately ventured back out to see how much we could visit before the rain came.

Our first stop was Cape Race, the easternmost spit of land on the entire North American continent. It was only about 25 minutes from St. Johns, so we were confident that we could reach it before getting drenched.

Having slept through the ferry ride, this was our first glimpse at the expanse of the Atlantic. Admittedly, visibility wasn’t that great given the light fog and low cloud ceiling, but it was still impressive site. You can read more about Cape Spear. We explored around the site a bit, including it’s old World War II gun emplacements and two different lighthouses.

Leaving Cape Spear, we found Rugged Rock Harley-Davidson dealership, where we both elected to buy tshirts.

Talking to one of the sale-folks, we found out that there is a BMW Motorrad dealer in St. Johns, The Toy Box, so we went there next. It was a tiny dealership, basically half of a yard implement store. Still, Chuck found another t-shirt (they didn’t have my size), and a new base layer top.

With our minutes of dry weather waning, we rode back to the hotel and walked across the parking lot to the Fiona MacCool’s Irish Pub for a bite of lunch.

We hung out at the room for several hours before venturing out for more food. Are friend, who’s a Newfoundland native, suggested the Duke of Duckworth pub because it has great fish and chips, and because it’s been a pub since the 1700s. Given the continuing rain, we called a cab for the miles downtown. He dropped us off in front of a eight-foot wide alley between buildings, halfway down this alley was a door under an awning; this was our destination.

The only problem was the chalkboard sign in front of the door that stated kitchen hours as 11am-8pm.

Lucky for us, the neighboring establishment, directly across the alley, also served dinner: Magnum & Steins. While the place was small, only five tables, one was open and we were seated immediately. We were boring and ordered the same thing: a small portion of the fish soup and a serving of fish & chips. The fish soup was amazing and the small portion would have been enough for an entire meal. The fish & chips was also quite good, though I couldn’t eat too many of the chips since I was already about to burst.

We’ll have to try the Duke of Duckworth again tomorrow night.

Here’s our track for the day, not including the taxi ride to downtown, all with the normal altitude overlay.

Weather-permitting, we’ll venture around the Avalon peninsula of Newfoundland, returning to St. Johns for a second night.