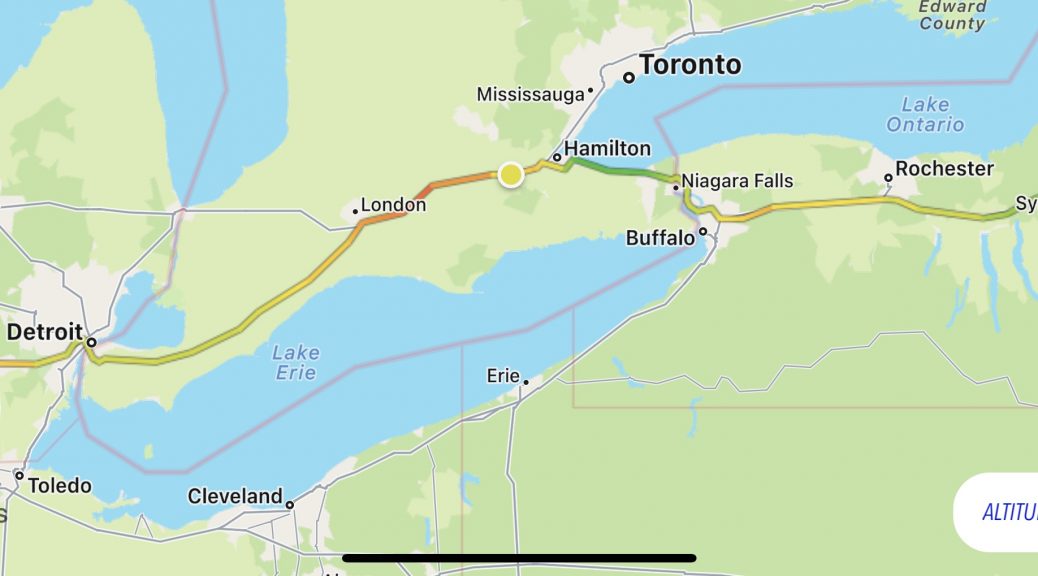 After about 15 years of thinking about it, I’m finally going to ride across Newfoundland, with my best riding buddy, but first we have to get there.

Oh, I can think of lots of reasons:

The hard dates that you have to build the trip around are the ferry crossings. The Newfoundland ferries fill up, so you are advised to make your reservations well in advance. I mean months, not weeks. I was able to secure a four-bunk berth for both ferry trips. I realize that there’s only two of us, but that’s what was available. The berth is pretty important for the longer ferry ride to the far side of the island (16 hours, overnight). It’s not as important for the six hour ride back to Nova Scotia, but it’s handy to have a designated place to get away from the masses and crash if you want to.

Joining me on this trip is my riding buddy, Chuck. We did our first rides together back in 1997 and have likely logged (our best estimate) between 35,000 and 50,000 miles together. He rode to my place in Michigan from South Dakota. He’s got some hip issues that will likely require additional rest stops between gas fill-ups, but we should still be able to ride 400-500 mile days when we need to.

Speaking of daily ride length, we purposefully planned the days on Newfoundland to be light on miles; no day includes more than 300 miles of roads traveled. The reasons for this are:

Chuck and I had planned a basic route to get from Michigan out to Nova Scotia. Traditional slab-heavy routes went out of our way. The most direct four-lane route would have been the 401 across Ontario, but once that route got into Quebec, it went much further north than we need to go before finally turning south across New Brunswick (besides, who really wants to traverse Toronto if they don’t have to).

The compromise is to cross into Canada at Detroit and pop back into the US at Buffalo, which cuts the angle towards the New England states to save some time. Then we’d cut northeast across the Adirondacks in upstate New York along with the upper-Appalachian regions of Vermont and New Hampshire. Once in Maine, we’d stick closer to the coast and ride across New Brunswick and finally arrive in Nova Scotia.

Aside: If you’re looking for an overview map of the entire route…?Sorry! No spoilers! You’ll just have to wait for the trip to play out.

We didn’t want to participate in the normal Combat Drive that is the morning commute into downtown Detroit, where we’d cross into Canada. Consequently, we waited until after 9am to leave Ann Arbor. We filled the morning with typical pre-ride tasks. We both checked tire pressures and oil levels. I applied a fresh coat of leather dressing to my jacket and chaps. We gassed up on our way out of town.

What can I say? The ride wasn’t that exciting. It was fairly utilitarian and a route that I’d traveled probably a dozen times before.

The border crossing from Detroit to Windsor was uneventful, in that neither of us was thrown to the ground, threatened with automatic weapons while our bikes were searched. Unfortunately, the border employee working the line that Ghost selected tended to be a bit chatty and that made for a slow line. He was pleasant enough, but ugh.

We had an absolutely gorgeous and temperate day for this ride, so there was no sweating to death in our gear or getting drowned in a thunderstorm. It was a pleasantly cool summer day and the miles east on highway 401 were eagerly gobbled up by our similar BMW K1600s.

We did run into some nasty traffic backups in Hamilton, Ontario. As fate would have it, we needed gas and our detour off the congested highway took us around some of the worst of the congestion. The ride east around Hamilton all the way to the Welland Canal was very tight and often not quite up to cruising speed, but it eventually dissipated, with most of the traffic heading towards Niagara Falls and downtown Buffalo, New York. Instead, we crossed back into the US on the north side of Buffalo, skirting most of the congestion about to made much worse by the start of the evening rush hour.

Our path out of Buffalo was I90 east, otherwise known as the New York Thruway. Yes, that mean it’s a toll road. Somehow, today’s toll roads seem less of a hassle. For one, you don’t have to stop every 50 miles or so (or at each exit) to dig into your pockets and pay a toll; those transponder pucks that track your vehicle (e.g., EZPass) take care of that. If you don’t have a puck, they track your vehicle by your license plate number and you can pay them later (or they send Guido to break your kneecaps). I had an EZPass, Chuck did not, but our different payment/tracking methods didn’t require us to do anything different during the actual ride, which is nice.

The unseen participant in this ride is our support coordinator: Chuck’s wife Barb who is back home in South Dakota. With a little direction from Chuck, she was the one that found us the righteous deal at a hotel in Syracuse, New York. She called Chuck with the booking, he related it to me, and I adjusted the destination in Waze. It was beautifully convenient.

We pulled into our hotel parking lot 443 miles and just over 10 hours after we left Ann Arbor. Given the border delays and a few extra stops. We made decent time and stayed (pretty much) on schedule for splitting the ride to Nova Scotia into three relatively equal days.

After dumping our stuff in the hotel room, the suggested dining establishment (less than a mile away; bonus!) was the Bull and Bear Roadhouse. Chuck got a cheeseburger and I got a brisket sandwich. Neither of us will go to bed hungry tonight.

A few more miles of New York Thruway will give way to some nice two-lane roads across upstate New York, Vermont, and New Hampshire. If all goes well, we should (fingers crossed) end up in Augusta, Maine.

…And Before You Ask…