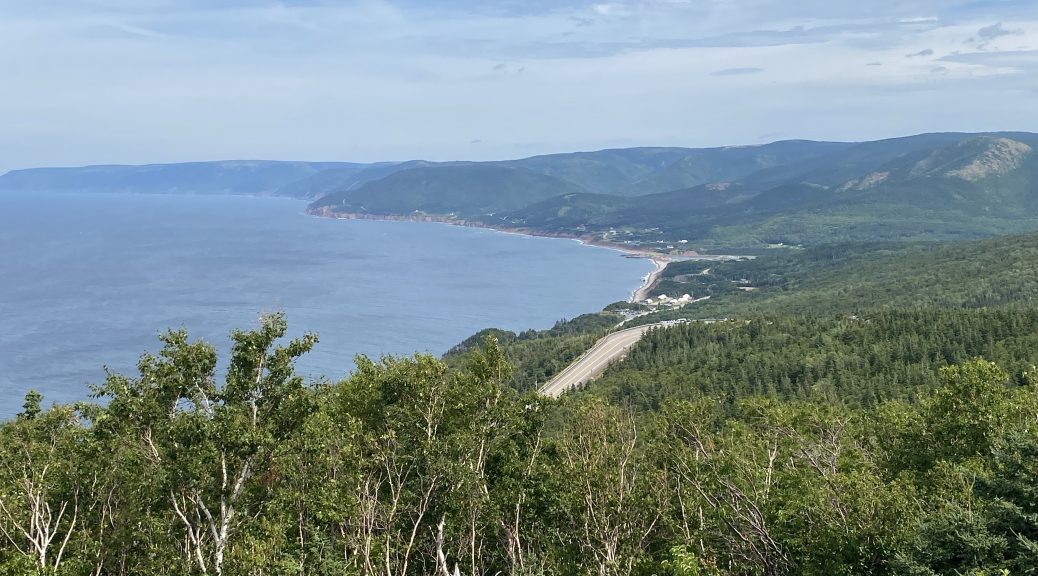 Today we rode the Cabot Trail in Nova Scotia, subsequently heading west as far as possible.

We had a long way to go today, and the start of it (the Cabot Trail) would be fairly slow going. Consequently, we were up pretty early. The weather, thankfully, was continuing to cooperate. It was sunny with only a few scattered clouds. Temperatures were still in the upper 60ºF range, so an extra layer under the jacket was necessary.

We were packed and pulling out of the hotel parking lot a little before 9am.

We started west on highway 105, which took us from Bras d’Or over to the bridge at New Harris Settlement. At that point, 105 climbs high over a ridge and then back down to the next inlet, which is St. Ann’s Harbour. Once we reached the base of that harbor, it was time to turn off the 105 and onto the Cabot Trail, named for explorer John Cabot, whose expedition discovered portions what is now maritime Canada in the late 1490s (shortly after Columbus and almost 500 years after the Norse landed on Newfoundland at L’Anse aux Meadows).

The Cabot Trail is the name of the road that weaves along the extreme northeast coast of Nova Scotia. From a motorcycling standpoint, the Cabot Trail is, first and foremost, very scenic. There is a lot to look at and plenty of views to enjoy as you cross the mountainous coastal ridges covered in forests. There are many sections of wide sweeping corners that are fun to rail around on. There are, however, a couple of more technical and twisty sections that are a total blast to ride. I tend to ride in a fairly spirited fashion, and I still don’t touch foot pegs down on the Nightowl very often.

Today, I did it twice.

While we were still on the west coast, we stopped at one of the first major overlooks for some pictures from a high ridge.

After we passed the ski slopes at Ingoish, we stopped at another coastal park for a few photos of the rocky coast.

Strictly speaking, the Cabot Trail does not travel all the way to the northeastern tip of Nova Scotia; you have to leave the Trail to make that side trip. I’d placed a GPS waypoint at the Bay St. Lawrence and my Scenic app took us there, precisely on the correct gravel goat path to get to my placed waypoint. For future reference, when planning a visit to Meat Cove off the Bay St. Lawrence, place your target waypoint just to the east side of the Meat Cove inlet at the coastline. The roads to that spot will all be paved. If you want more adventure, place your waypoint on the west side and you, too, can enjoy the dirt road adventure as you wind your way around Deadman’s Pond. In any case, we took some pictures there anyway; it was still pretty.

Further around the Cabot Trail, we stopped briefly at the Rusty Anchor restaurant. This venue actually has a rusty anchor in it’s yard and its supposedly a tradition to get your photo taken with the anchor.

Chuck insisted that this was a requirement, so here you go.

Not far past the Rusty Anchor (traveling counterclockwise), the Cabot Trail gets a lot more twisty and technical, all while climbing a high ridge. This part of the ride was an absolute blast and I somehow managed to touch pegs a couple of times. We paused at the top of these twisties to catch our breath and take a photo or two.

After a brief rest stop south of Inverness, we wound our way along the coast back to the Canso Causeway. Our Cabot Trail ride was over.

At this point, the day’s ride got a bit more business-like. We had miles to go and most of the day gone. We got on highway 104 west and stayed there until we got to New Brunswick, just past Amherst. Just west of the Canso Causeway, 104 is a two-lane with lots of passing lanes. As you get near New Glasgow, however, it becomes a proper four-lane limited-access highway and your average pace increases a bit.

Chuck had engaged our support team (his wife Barb) to find us a hotel room in Moncton (we were confident that we’d get there tonight). She came through, as always, and we now had our target for the day.

We stopped in New Glasgow for some fluid management (in and out) and were soon back on the road. Aside from a few stupid driver tricks that we witnessed, including a woman who’s speed was completely controlled by what song was playing in her earbuds. Good song = fastest car on the highway. Looking for the next song to play = slowest car on the highway.

Around Amherst, you’re in a low area where there’s only about 10-15 miles of land between the Atlantic Ocean and the Bay of Fundy. The wind whips through here pretty nicely, and we were catching a lot of it in our face as we passed through. This was especially inconvenient since we were trying to stretch these tanks of gas all the way to the reserved hotel room in Moncton.

I could explain how dramatic it was monitoring our trip computers to see if we were going to have to stop for gas again before the end of the day… but I’ll ruin the suspense. We made it. I had nine miles left in the tank; Chuck had six.

We unloaded and immediately went downstairs for dinner at the hotel’s restaurant. We were seated quickly, after which the dinner process slowed to a near European pace. To be fair, a typical European dinner out takes a long time because there are lots of intermediate courses and the entire experience is designed to take all evening. In our case, the pace was largely due to our waitress being spread way too thin over too many tables, but still finding the time to chat and flirt with every table she took care of.

She was very bubbly, had a comment about absolutely everything, and seemed to move around the restaurant in a constant state of, “Oh! I forgot about (insert specific waitress duty here)”. To be fair, she was a lot of fun, and Chuck even managed to get molested by her.

Aside from the waitress, the food itself was quite good Italian fare. I had an appetizer of mozzarella balls wrapped in prosciutto; it was decedent as hell. The linguine with shrimp was less decadent, but totally delectable. The cannoli dessert was… a cannoli desert; how would you screw up a cannoli? These were fine. Over the course of the meal, I somehow found time to consume a couple of Old Fashioned cocktails; the best ones of the trip so far.

After dinner, Chuck and I made our nightly walk to the nearest convenience store for drinks for the room.

Honestly, there is probably some good video of us railing up the twisties on some of the more challenging sections of the Cabot Trail. Unfortunately, I’m just too lazy today to dig out the memory card and peruse a few hours of video looking for the best pieces. Sorry.

For an interactive map, use this link to the ride that my Scenic navigation app recorded for the day.

We ride west, cross back into the USA after 17 days in Canada, and get to Maine… or perhaps New Hampshire. 路‍♂️ We’ll see.