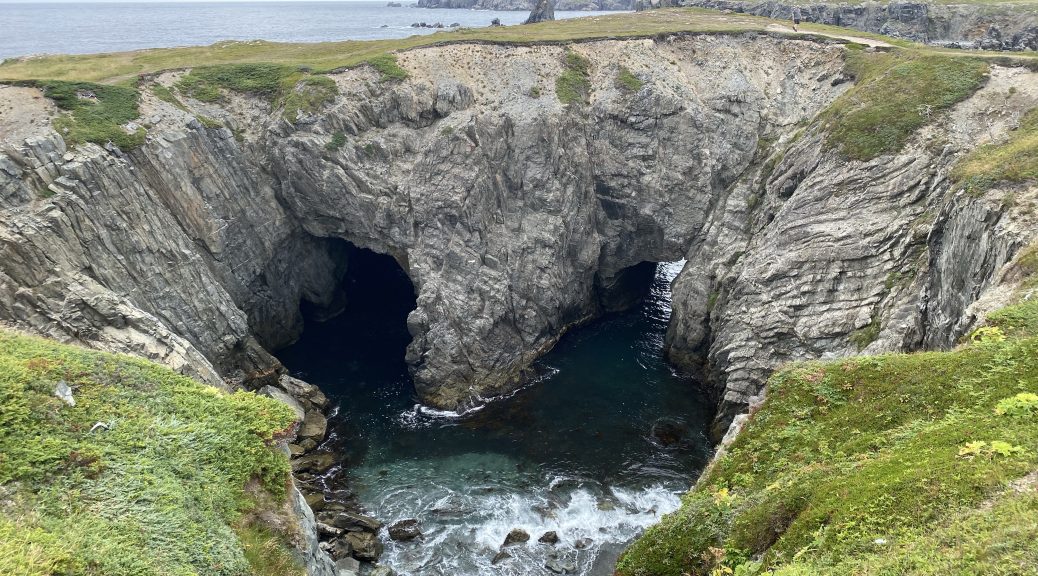 Today we ride most of another named loop around another peninsula. It sounds repetitious, but it’s not.

We got a later start today, not even moving around much before 9am. This hotel room was a first-floor front-facing room, so there was an inside door to the hallway and an outside door to the parking lot, where we’d parked the bikes right in front of our room. That made loading the bikes really easy this morning, but we found other things to distract us.

Specifically, we decided to top off the air in our rear tires. Mine was about two psi down; Chuck’s was down about 2.5 psi. A brief dig into my right saddlebag found my Motopump. We got our rear tire pressures up to spec, stopped for gas, and headed off.

We rode through Clarenville under fairly constant overcast, broken by only the slightest hint of a blue sky beyond the gloom. The cloud cover made for a cooler day; it was only about 60ºF and, of course, windy.

Unlike our previous days, where the road basically followed the coast (or near to it), today’s chosen (really, only) highway ran along the spine of the Bonavista Peninsula. As usual, the Newfoundland tourist bureau had given this route a name: the Discovery Trail. We were basically following it, but while the official Discovery Trail included side trips down to each and every village along the coast, we skipped most of those. Unfortunately, some of them sounded interesting, so by the time we approached the turnoff to Melrose I was suffering travelers anxiety wondering what wonderful photo opportunities I’d already missed.

Riding the short road down to Melrose, the heavy forest denied any decent views from up high, but I wove through town and found a spot to take a few shots of the coastline.

Back up on the main highway, we continued to weave our way through the conifer forest. We got a little mist in one higher area, which made the day feel even chillier, but after it stopped we were left with a slight pine smell permeating the scenery.

As we approached the town of Bonavista, we turned north to approach the Bonavista lighthouse via a dirt road through Dungeon Provincial Park. The road was in fairly decent shape, but seemed to be going out into the middle of nowhere, so I was concerned that the Scenic navigation app was taking down another goat trail. Just as I was considering turning around, we saw a tour bus coming the other way; this must be the right road.

We stopped near the coast and walked over the the overlook for the Dungeon, which is the remains of a sinkhole where the coast eroded two arches a good piece inland and the ground eventually collapsed around it. We photographed the Dungeon and some of the surrounding coastline.

Back on the bikes, we finished the gravel road through Dungeon Provincial Park and returned to pavement for the rest of the short trip to the Bonavista lighthouse.

The area around the lighthouse (and the aforementioned Dungeon Provincial Park) is no longer the deep green conifer forest we’d had for most of today’s ride. Now it was the treeless tundra-like landscape with only a few low shrubs and short grasses growing between the rocks that pepper the landscape. The green landscape ends abruptly at craggy rock faces that fall steeply into the surrounding ocean. It’s fairly striking on a nice day like today but it’s probably a bit sparse and foreboding when the North Atlantic is kicked up in a storm.

Due to all these tasks amounting to a lot of busy work, the government tended to hire candidates that already had large families, with plenty of young hands to handle those menial chores.

Just past the lighthouse, there’s a rock spire that one of Newfoundland’s more popular local characters makes it’s home: the Puffin. We’d been looking forward to getting a look at a Puffin since we’d landed.

Here was our chance.

Unfortunately, a puffin isn’t that big (about half the size of a seagull), and from this distance, you can see them, but not very well. Even at the maximum zoom of our iPhones, we couldn’t get close enough to really see them.

My secondary camera to the rescue!

For years, I’ve carried a Nikon Coolpix super zoom camera. It’s got 30X optical zoom (the iPhone zooms by sacrificing resolution) and takes great photos at distance. I walked over to the Nightowl, grabbed the Nikon, and prepared to get up close and personal with a puffin. I push the power button, and…

WTF? I charged this bloody thing only a day or two ago! Well, surely, if I plug it in for a short while, I should get at least enough juice to take a photo or two.

Chuck suggested that we head down the coast a few miles to the town of Bonavista, grab some lunch, and charge the Nikon while we eat. Then I could dash back, get my puffin photo, and we could continue our lives satisfied that we had not squandered this opportunity.

I grabbed my phone and scoped out restaurants in Bonavista that were actually open (it was, after all, a Sunday). There weren’t many options, but I found Skipper’s Restaurant right off the harbor (probably has a great view). We rode into town but Skipper’s was towards the south side of town and we passed at least four open restaurants that hadn’t shown up when searching in my maps app. This is one of the challenges of touring places that are a bit remote; not everything is completely up to date with the rest of the world.

When we pulled into the Skipper’s parking lot, we saw a huge restaurant with a similarly huge tour bus in already in the lot. Chuck and I were thinking the same thing and it took a 10 second conversation to decide to head back north to a pub-like joint we’d seen on our way through town, with a brightly lit Open sign.

We found a parking spot on the street right across from the Ragged Rocks Gastropub. There were plenty of tables available and the waitstaff helped find an outlet where I could get a quick charge for the Nikon. I ordered a seafood chowder and Chuck ordered… wait for it… fish and chips. Both dishes were excellent. I found the chowder especially satisfying given the cooler temps of the day. The huge chunks of cod, salmon, shrimp, potato, and carrot, floating in a creamy soup spiced with pepper and dill made this dish a perfect solution for a chilled body.

With lunch consumed (savored is more like it). I grabbed my partially charged camera and headed out to the Nightowl. Chuck was going to camp at the Ragged Rocks and exploit their WiFi while I grabbed my puffin photo.

With everybody eating lunch (or about to), there was no traffic heading out to the lighthouse. Consequently, I made good time and was walking over to the puffin overlook in only a few minutes. I pulled out the Nikon, picked out my target puffin, nicely silhouetted against the green turf background, and turned on the camera.

Aside: Yes, when I get really mad, I swear in Latin.

This explains why the battery was totally discharged after a full overnight charge just a few nights ago. The battery isn’t just empty, it’s dead. Door nail. Getottet. It is a non-battery.

And herewith, my fleeting opportunity to get a great photo of a puffin, hath been severely violated.

I climbed back on the Nightowl and steered back towards the Ragged Rocks and Chuck.

The rest of the day was more alternating between coastal roads and inland forests. Some of the coastal views were really nice; I’ll try to capture some of them from the dashcam video.

Just before we got back on the TC1 (Trans Canada 1) headed west, the clouds had completely vanished and the sun shined down on our, now considerably warmer, day. It was, however, a little after 5pm and we still needed to cover another 30 miles or so to get to our destination for the day. Since this day was fairly short, mileage wise, I’d added another run out a short peninsula in Terra Nova National Park, just to add some more miles. Unfortunately, that peninsula is narrow and there’s really only one road in and out, so you have to retrace your steps. After a brief discussion, we decided to skip it since it was likely more of the similar scenery.

Subsequently, we headed west on TC1, making good time towards our destination of Traytown and the Salty Bay Cabins establishment that held our reservation for the evening.

At this point, my Scenic navigation software decided to take us on the scenic route and routed us five miles past the Traytown exit before having us double back on a nice coastal road. It was only about a 10 mile detour, but it was entirely unnecessary.

The Salty Bay Cabins clerk greeted us in the parking lot even before we got off the bikes. There was nothing to sign (I’d noticed that they charged my account a few days ago). She gave us the room number and told us the key was on the desk in the room; the door was open. She answered a few questions and we rode around to the bright blue building that housed our designated room: #16. The room was simple, clean, and included two bedrooms, a kitchen, and a sofa. Overall, not bad at all.

The final challenge of the day was dinner. This was a remote area, which is why we ended up in such an obscure lodging venue as the Salty Bay Cabins. Unfortunately, the closest dinner option (again, on a Sunday evening), was in Eastport… wait for it… which was halfway back up the peninsula that we’d elected to skip.

The ride to Eastport, and the Down Home Delights restaurant, was quite striking. We spend most of the ride a stone’s throw from a deep inlet, complete with a long causeway across a shallow bay. Very cool.

We reached Down Home Delights and sat down to order a mere 25 minutes before closing time (we ended up not being the last group to arrive). We both ordered… wait for it… the fish and chips. For this version, the chips were obviously hand made right here. The fish was excellent, but the batter, while pleasantly light, wasn’t quite substantial enough to that the juices of the fish didn’t start to make it break apart. It’s a minor nit, and didn’t change the excellent taste (once again, this fish was probably swimming a day or two ago).

The ride back to the cabin was the cliché of riding into the sunset. Actually, the resulting glare made it hard to keep a vigilant check for deer and moose on the roads shoulders, but we somehow managed to survived. I tagged some of that ride on the dashcam; we’ll see if I can cobble together some video for today’s highlights.

In the end, this day was only 203 miles long and took us about 7.5 hours. A leisurely pace, indeed.

Here’s a video of some of the day’s highlights.

And here’s the a link to the interactive map from Scenic.

We continue north and west, visiting the northern tip of central Newfoundland (Twilingate). The weather forecast is even better than what we had today, and that will help since today is a fair amount longer.