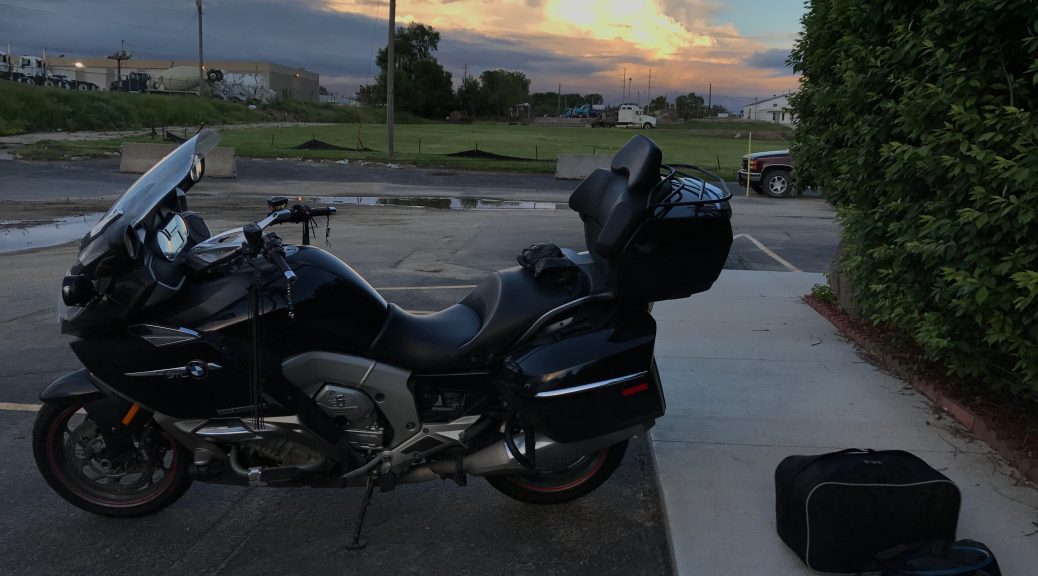 Compared to the excellent scenery and high drama of the trip so far, this day was absolutely boring, but effective.

I knew from the earlier westbound leg of this trip that I could traverse the distance from home to Denver in two days (even with a really late start on one of those days). Consequently, having two full days to ride home Fort Morgan, CO (about an hour east of Denver), I was in good shape. My midpoint for the westbound journey had been Des Moines, IA. If I made it to Des Moines, I had a reasonable last day’s ride to get home.

The rain and snow from the previous day was, for the most part, gone. I had mostly cloudy skies and temperatures in the 50ºs F. The wind, however, was still blowing pretty hard from the north. Checking weather for a few towns along my way, it looked like I would be dealing with cross winds most of the way.

After gassing up in the station next to the motel, I took a minute to misuse the windshield squeegee and remove some of the road grime that had caked the Nightowl during the snowstorm the day before.  This meant cleaning both sides of the windshield, cleaning behind the headlight shield, and removing the grit from the rear of the bike. I forgot the rear view mirrors and gauges; I would clean them at the next gas stop later in the day.

Out on I76 eastbound, the traffic was light (not a big surprise). The wind, as predicted was a bit of a nuisance, but not something that demanded constant fighting with the handlebars.

I stopped for gas in North Platte, NE and again in Lincoln, NE. I could see rain clouds ahead of me at the Lincoln stop. A check of the weather radar to the east showed scattered showers of varied strength crossing my path over the next few hours. I dug out the raingear and put it on.

My timing in reaching Omaha, NE put me in the late stages of rush hour, but in Omaha that doesn’t mean too much. Most of the traffic appeared to be headed west on I80 and I was headed east. The pace slowed a little but not enough for me to ever downshift.

I’d stayed up too late the night before. Partly to take the time to write up the dramatic trip through the snow-inflicted Rockies, partly because it took a while for the mind to calm down. The result is that I was getting tired during the crossing of Iowa. I was lucky that a stretch of especially good songs came up on my main playlist and that kept me occupied until I reached the outskirts of Des Moines, IA.

After checking into my room, I ventured north past the highway in search of a BBQ restaurant I’d seen on the map. It certainly looked close enough to the road that I should be able to see it, but I couldn’t find it. Glancing to the opposite side of the road, I saw Montana Mike’s Steakhouse. That sounded like an acceptable fallback; at least I could actually see it. Decision made.

For whatever reason, an actual steak sounded too heavy tonight (I know, take away my Man Card). I had them bring me some hot chocolate to warm up (with a shot of Jack Daniels for added effectivity). I then ordered, and enjoyed, a plate of Louisiana Pasta, which means shrimp, chicken and sausage in white sauce with grilled red and green peppers. Proper comfort food.

Here’s the route map for the day with an altitude overlay showing the long imperceptibly downhill ride.

One thought on “Home in a Hurry, Part 3”