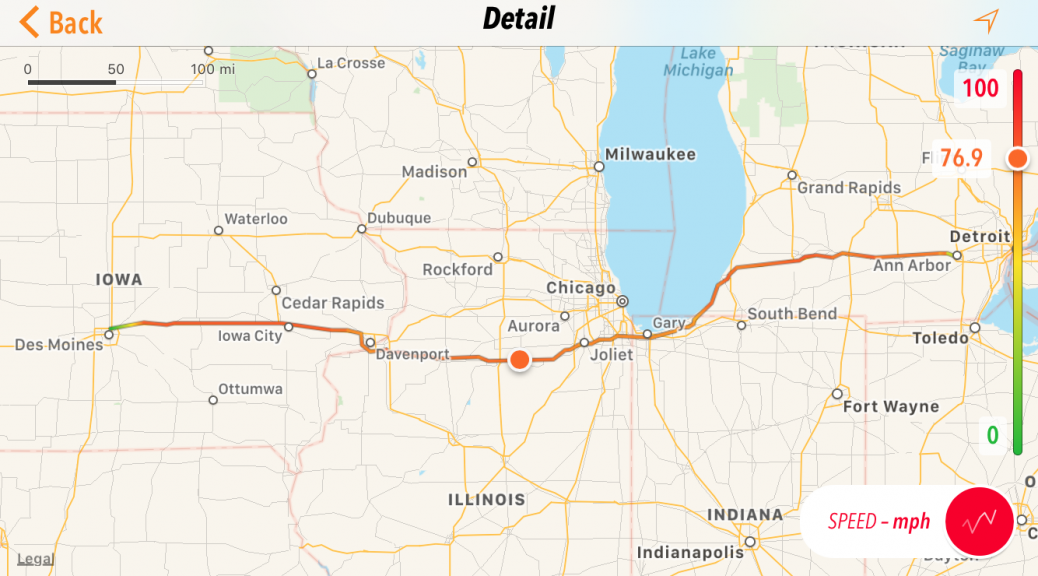 All I had was another 500+ miles to ride to get home for a day before venturing onward with Karen to the next party. Unfortunately, there was a weather system to fight through to get there.

I overslept. (Somewhere, my friend Fins is rolling his eyes.)

I awoke at 8:30am. Confident that my 9am alarm would wake me up, I proceeded to lounge in bed and doze off again. What I didn’t realize is that my wake-up alarm was not set. The next time I glanced at the clock, it read 10:12am.

After a quick shower and tooth brushing, I was packed and out the door before the 11am check out time.

What can I say? The first half of today’s ride was through eastern Iowa and northern Illinois. Aside from the crossing of the Mississippi River at the quad cities (Moline and Rock Island on the Illinois side; Davenport and Bettendorf on the Iowa side), there’s not much in the way of exciting scenery.

It was cooler and not as windy as yesterday when I was crossing Nebraska. The clouds had moved in and some of them looked threatening, but the view from the weather radar only showed occasional showers and they didn’t happen until Illinois.

So I cranked up the Nightowl to a good cruising speed, turned on the stereo, and proceeded to dial up some tunes for the trip.

I’ve created the main playlists on my iPhone such that a song only appears on the list until it is played. It then disappears from the playlist for a period of time based on the song rating; the higher the rating, the shorter the period. Unfortunately, the iPhone doesn’t update the playlists not the fly (at least not reliably). This create the following scenario when playing songs from the iPhone through the Nightowl’s stereo.

When you plug in an iPhone (or iPod) to the Nightowl, the on-board stereo recognizes it and downloads the data about the songs and playlists on that device. You can then use the on-bike controls, including the Wonderwheel on the left grip, to scroll through playlists and songs on each playlist. The bike, however, does not know which playlist you want to play, so it finds the very first song on the device (in alphabetical order) and starts playing it. It’s up to you to bring up the menu, select the desired playlist, and then select the song you want to hear on that playlist.

At the beginning of a long trip, this isn’t a problem. The playlist and song titles show up on the dash display and the Wonderwheel makes it really easy to scroll around the lists.

The problem is that after playing the same playlist, all day, for a dozen days, you have to scroll through a several hundred song titles to get to the song where you left off. You an avoid this idiosyncrasy by not unplugging the iPhone during gas stops. I think you could get away with unplugging it as long as you did so after the ignition was off and then plugged it back in before you turned the ignition on again. (I have to test this to be sure.)

While this becomes annoying, it does have the interesting side-effect of forcing you to relive your trip through the songs that were playing while you rode.

I was approaching Joliet, IL, when Take the Long Way Home by Supertramp started playing. Perhaps the playlist knew there was rain in front of me.

Due to my late start, I crossed the Illinois River north of Joliet at 3:15pm. I really needed to be past the I80/I94 interchange before 4pm if I wanted to avoid being swallowed by the afternoon commuter traffic. Luckily, I’d remembered to mount my EZpass on my windshield at the start of the day, so I rode past the toll booths and managed to merge onto I94 east and cross the Illinois/Indiana border at 3:45pm. There were a few slowdowns in the congested corridor south of Lake Michigan, but nothing too bad. As long as I stayed ahead of the worsening traffic, I’d be fine.

That’s when mother nature threw me to the wolves… again.

The heavens opened and the rain fell. Lucky for me, the pace of traffic never dropped to where I was simply sitting in the downpour. As long as the bike was moving forward at ~30mph or better, I stayed fairly well protected. There was an especially bad stretch near Michigan City, IN that got my gloves and ass wet, but it dropped off in a short while.

I stopped for gas in Paw Paw, MI, which should be the last gas stop of the day. I wasted more time trying to coax some actual fuel out of two different gas pumps. I tried another octane rating but that didn’t pump either. I went inside, scolded the attendant for not being aware that they were out of gas, and stormed off to the neighboring station. They had pumps that actually pumped fuel.

Another check of the radar showed that the rain ahead of me wasn’t just an occasional cloudburst. Out came the rain gear. As I accelerated up the on-ramp to rejoin I94, I realized that I’d left my sunglasses on. It was already approaching 6:30pm but I figured I’d be home before it got pitch dark.

The rain continued and Cold Shot by Stevie Ray Vaughn played. The heated gear was keeping me warm, but my wet boots and encroaching water between my helmet and rain suit collar were making me feel the chill.

It was getting pretty dark when the rain let up about 15 miles west of Ann Arbor. My sunglasses got more and more inappropriate by the minute, but I had go fever now. Home was only a few miles away.

Soon enough, I’m Bad, I’m Nationwide by ZZ Top accompanied my roll up the driveway and into my garage.

I’ll work a day tomorrow, repack the Nightowl with Karen’s gear (and less of mine), and leave for the east coast after work.